China and the Americas 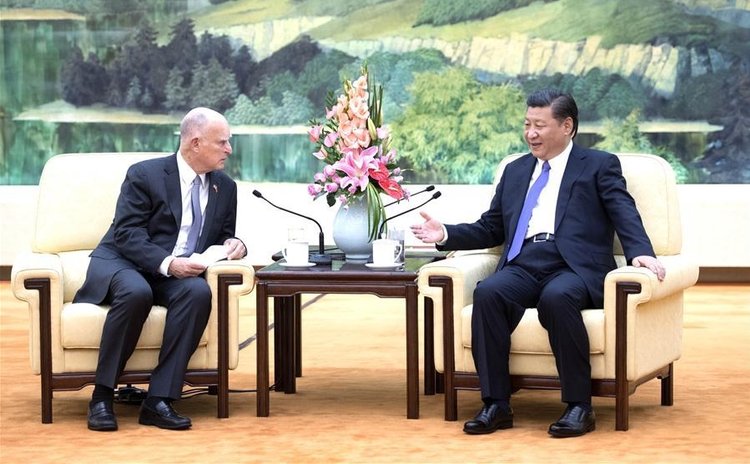 A few days ago, China struck a remarkable deal: it agreed with the state of California to work on projects that will help lower US greenhouse gas emissions.

In a move that symbolically set aside President's Trump's ill-considered decision to reject the global consensus on climate change, it was agreed to establish a joint Chinese-Californian working group. This will explore how low carbon technologies can be applied to urban development and transport, and will create partnerships between Californian companies, universities and their counterparts in China's provinces.

It was a demonstration of Beijing's willingness to think differently about all future relationships, builds on US states' ability to act independently, and was supportive of a possible future Democratic contender for the Presidency, the Governor of California, Jerry Brown, in his determination to move his green policies forward.

It also signalled China's flexibility, and willingness to develop alternative strategies when a positive long-term outcome is likely Although unrelated, it occurred shortly after Chinese officials had been indicating how Beijing's thinking on Latin America and the Caribbean is evolving.

In comments to the media, Zhu Qingqiao, the Director General of the Department for Latin American and Caribbean Affairs at China's Ministry of Foreign Affairs, said that China's objective in the Americas was to move its relationship to a higher level, through closer co-operation on policy, economics, trade, culture, international affairs, accompanied by development support.

To this end, he said, China's President, Xi Jinping, had issued instructions to build comprehensive but mutually beneficial multilateral ties with the region.

To achieve this, Mr Zhu said, China's focus is on creating a new joint development model based on logistics, energy, and informatics. He also highlighted China's Silk Road initiative, and the opportunity for every nation in the Americas to benefit from its US$600bn global infrastructure programme which aims to spur globalisation through road, rail and maritime linkages.

He encouraged the region to make use the Asian Infrastructure Investment Bank - China's alternative to the World Bank - and highlighted China's commitment to the China-CELAC (Community of Latin American and Caribbean States) Forum and Beijing's willingness to spend US$35bn in support of development projects in the Americas.

In an indication of China's now significant economic role in Latin America and the Caribbean - second only to the US - Mr Zhu said that his country's total investment in the Americas in 2016 had reached US$150bn, and bilateral trade last year stood at US$210bn.

In short, what China is now advancing is more than a development strategy for the Americas. It is promoting an approach that eventually leads to a greater policy coincidence on global and hemispheric issues, and by extension to the eventual rebalancing or distancing of the role and influence that the US and Europe have exercised previously in the hemisphere.

Last month, President Xi placed his thinking in a global context by emphasising his country's role in defending globalisation and encouraging future development in a manner that is more equitable.

Speaking to a high level international audience attending the opening of the country's 'Belt and Road Forum', he said: "We should build an open platform of cooperation and uphold and grow an open world economy. We should jointly create an environment that will facilitate opening up and development, establish a fair, equitable and transparent system of international trade and investment rules and boost the orderly flow of production factors, efficient resources allocation and full market integration".

China's recent statements on its global policy and approach towards the Americas come at a time when the privately expressed opinions of a number of Caribbean political figures about President Trump's 'America First' policy, are threatening to break out into the open.

On June 4, in a first public indication of the region's unease, CARICOM formally responded to the US President's decision that he would withdraw from the Paris Agreement on Climate Change.

Speaking for the Caribbean Community, its current Chairman, the President of Guyana, David Granger, said that its members were 'deeply dismayed and disappointed by the decision of the United States to withdraw', noting that it was 'more than just another international agreement on another complex international issue'. The issue for the Caribbean was, he stated, 'an existential threat' requiring global solutions.

In unusually strong language, the CARICOM statement described the US decision as an 'abdication of that responsibility' and as having sent a negative signal to those most vulnerable to the effects of climate change, while noting that CARICOM was encouraged that the overwhelming majority of nations remains firmly committed to the Paris Agreement.

President Xi's desire to see economic globalisation deliver greater global equity is of course welcome, as is his willingness to put forward an alternative view to that of the present incumbent in the White House.

However, for China's approach to truly benefit the Caribbean, what will be required is a relationship that goes beyond investment and development financing, and identifies how the region might obtain improved access to the Chinese market for its goods and services.

It is a point emphasised recently by President Uhuru Kenyatta of Kenya who, in a Financial Times interview, called on China to rebalance its skewed trade relationship with Africa, arguing that Beijing must do more to tackle a widening trade deficit. Referring to concerns in parts of Africa, that China was recreating colonial trading patterns, Mr Kenyatta expressed the hope that Beijing was "beginning to appreciate that, if their win-win strategy is going to work, it must mean that, just as Africa opens up to China, China must also open up to Africa".

China's rise is of profound significance, and is more than just an economic phenomenon. It demonstrates that the world's centres of gravity are relocating.

It is happening as US policy towards Latin America and the Caribbean has become incoherent; as swingeing budget cuts are being proposed; the US is to withdraw from the Paris climate change agreement; its Cuba policy in part may be reversed; and the White House's global perspective is impossible to discern.

By default, Washington is ceding to China the high ground it previously held in the Caribbean and Latin America.

Previous columns can be found at www.caribbean-council.org June 9th, 2017