Climate change: a test of the region's staying power 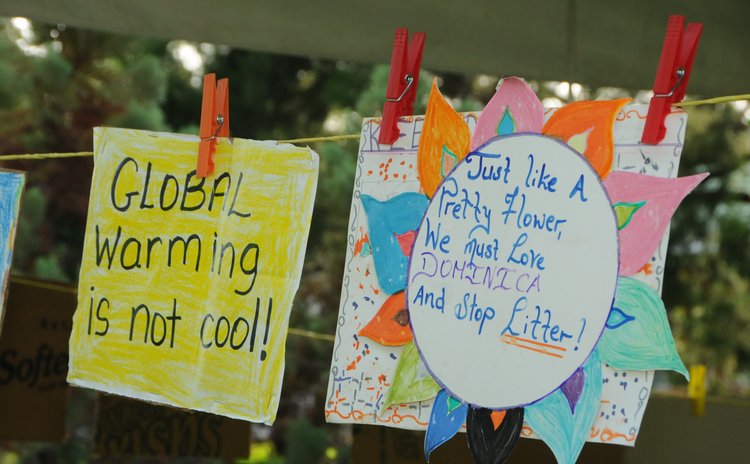 Signs at the Dominica Climate Change Day of Action at the Botanic Gardens, Roseau on Saturday November 28, 2015
By David Jessop

After a period of uncertainty, it has been confirmed that the Paris Agreement on Climate Change will enter into force on November 4. This is good news for the Caribbean, one of the most at risk parts of the world from sea level change and severe climatic events.

By global treaty standards, formal agreement has been achieved remarkably quickly, especially as the solutions that the treaty proposes remain politically controversial in many of the nations that agreed last December to the final text.

Normally ratification takes years to achieve. However, faced with evidence that the planet continues to warm, and the possibility that Donald Trump could become the next US President and may pick apart the hard-won agreement, the world's largest carbon emitters - China, the US, Brazil, the EU, and India, but not so far Japan or Russia - have agreed to ratify, thereby reaching the agreed target of 56.87 per cent of all global emissions, for the treaty to come into force

In many respects this is a victory for the Caribbean, for CARICOM in particular, and the ACP and other small island developing states which in Paris last December made clear a positive outcome was existential.

In outline, the thirty-one-page agreement proposes that a balance between greenhouse gas emissions and the sinks for ameliorating them is achieved in the second half of this century. It emphasises the need to hold the increase in the global average temperature well below 2˚C (36˚F) above pre-industrial levels; proposes 'pursuing efforts to limit the temperature increase to 1.5˚C (35˚F)'; and recommends that a peak in global greenhouse gas emissions be achieved as soon as possible. It allows for an asymmetrical approach, enabling all developing countries – including large industrialising carbon emitters like China, India and Brazil – to have more time to adapt.

In a section that addresses loss and damage, the agreement establishes funding at the minimum annual rate of US$100bn up to 2030 to enable support for mitigation and adaptation in developing nations. However, it does not set a time scale for reaching greenhouse gas emission neutrality.

Unlike the earlier Kyoto Protocol of 2005, which required major carbon emitters to agree to binding emissions reductions, but failed when the US decided not to ratify because of exclusion of nations like China, the Paris agreement requires all countries to devise their own climate action plans and then improve on them at regular intervals.

What comes next is likely to be difficult, requiring all of the diplomatic and political skills that the Caribbean and other small island developing states have.

While Hurricane Matthew and the damage that it wreaked in in Haiti, the Bahamas, and Cuba was a salutary global reminder of the risk that low lying states with limited resources face, CARICOM, as its Secretary General, Irwin LaRocque, noted earlier this year, now faces the challenge of being able to access the resources the agreement promises.

An important recent development in this respect has been the establishment by the Commonwealth Secretariat, with Australian finance, of a new facility intended to assist governments obtain available funding. The idea is that a Commonwealth Climate Finance Access Hub will locate national climate finance advisers in countries for two year periods to help access climate change support. Among the first countries likely to receive such support are Antigua, Barbados, Dominica, Guyana, Jamaica, and St Kitts, as well as other small island states in the Indian Ocean and the Pacific.

Other funding options are also being considered. Recently, Jamaica's Prime Minister, Andrew Holness, indicated that Jamaica is to work with its international development partners to pursue debt for climate change swaps. Such an approach, he says, has the potential to provide fiscal relief while helping to unlock climate financing to fund adaptation and mitigation initiatives.

What is clear is that when it comes to funding, the treaty agreement as is so far little more than an aspirational framework.

For this reason, at the forthcoming climate change conference in Marrakesh in November, CARICOM will need, together with its Alliance of Small Island States - the global grouping which brings together small island and low-lying coastal countries that share similar development concerns – to hold the world to account for what has been agreed.

This will not just be a test of the Caribbean's staying power and the willingness of regional governments to fund and support a continuing focus. It will also require the Caribbean to remind the countries that it supported during the negotiations, and which expressed concern about the implications of climate change for the region, of their commitments. Put more bluntly, it is now the time for China and Brazil as much as the US and Europe to ensure that the support for adaptation that the region needs, now materialises.

In this, both CARICOM and the Caribbean Community Climate Change Centre (CCCCC) will continue to have a critical role in coordinating the regional effort. But it will also be up to individual governments to maintain the political momentum, demonstrate a unity of purpose, and be determined to address the Caribbean's implementation deficit.

Climate change is an issue on which the Caribbean has had every reason to have its voice heard and be taken very seriously. Fifty per cent of its population and the majority of the region's productive enterprise and infrastructure lie within 1.2 miles of the sea. Its low lying nature, its fragile eco-systems, and extreme weather events demonstrate that it is a prime candidate to benefit from what has been agreed.

While countries in the region are often accused of allowing mendacity to drive their foreign policy, here is an example where the Caribbean deserves a transfer of resources if it, quite literally, is not to disappear beneath the sea.

Climate change also has a strategic importance. It enables the Caribbean to demonstrate an approach that owes more to the future than to the past; it is an issue on which it has a better chance to exert leverage; and one that can deliver national and regional development objectives. It is an issue on which the region occupies the moral high ground and has popular international support.