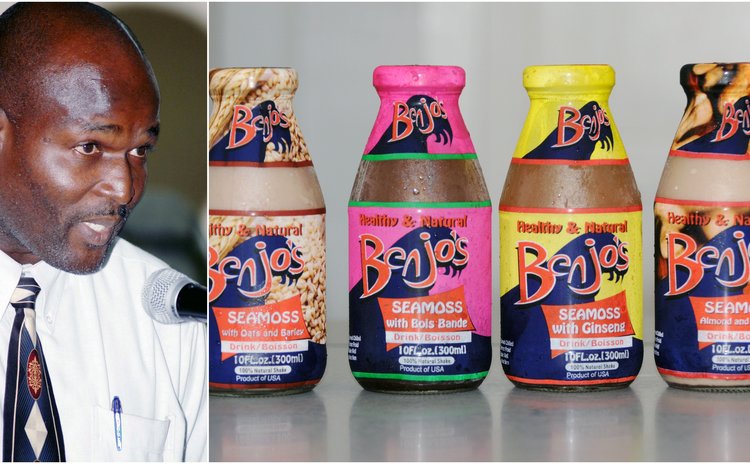 The sign on the label proudly states, "Product of USA," but there's one cold, hard, undeniable trust: this product was born in DA and is now being enjoyed by lovers across the Caribbean and now, in the United States.

"The idea was to generate a product from the Caribbean that is owed by black people but has the same potential as products like Coca Cola."

That's what John Robin envisaged 20 years ago when he invited Gibbons Benjamin to join him in establishing an agro- processing company to satisfy Dominicans' thirst for sea moss. With a loan of EC$150,000 from the AID Bank, they formed Benjo's Seamoss.

"My idea had always been to globalize the production and distribution of Seamoss," Robin told The Sun in an interview last week. "I think so far after 20 years we have been able to do that."

Robin, a former fisheries officer, got the idea to commercialize the "enhancer" that so many Dominican men swear by, while on a scholarship in Canada.

"I realized in the Caribbean we had lots of people making sea moss in the various islands but nobody commercialized it," he said.

So he set out to manufacture a product using raw material that's available in Dominica and the Caribbean, while providing a ready market for sea weed harvesters here.

The partnership with Benjamin lasted just two years before Robin paid his partner off and, in 1997 – just three years after it was formed - he registered the business as a limited liability company. Growing the business was not easy, Robin explained, but he was determined to succeed, resolute in his commitment.

"We have had some ups and downs."

Lots of down, as a matter of fact. For example, during the early stages they had to deal frequent "product development challenges", with half of their very first shipment going bad. In 2007 their bottle supplier shut down abruptly, leaving the company scrambling, but the greatest hurdle they faced was a dispute with the AID Bank that resulted in the lending institution locking them out for four months.

"It was the worst experience of my life. And all the employees were just thrown on the road," Robin recalled.

They've moved on now, away from the AID Bank's industrial building in Canefield, to the basement of Robin's house, but Dominica's love affair with Benjo's Seamoss has not waned, neither has the Caribbean's desire for the drink.

"We started on the local market but from Dominica we have been able to provide the entire Caribbean and we have been doing that for 18 years," the Benjo's boss told The Sun. "About 95 per cent of our sales was in the Caribbean."

The product's popularity has generated interest from people outside of Dominica who want a share of the business. Eight years ago Robin was approached by someone who had discovered the drink in the US Virgin Islands and wanted to produce it in the United States. While little happened in the ensuing years, there was another approach, this time from someone in Trinidad. Earlier this year, Robin finalized deals with both companies, and Benjo's Seamoss is now being produced in Trinidad and Florida.

Currently, the Trinidad operation supplies markets from Barbados to Suriname, while the Dominica operation supplies St. Lucia through to the British Virgin Islands, Robin revealed. And, he said, production will soon begin in Haiti, which will supply the Northern Caribbean.

"The idea is to saturate the Americas with Benjo's."

But this is far from the end of the expansion for this little company that started in less than modest facilitates in Fond Cole. By the end of this year, Benjo's Seamoss will also be produced in Canada, Robin said, with plans to take it even further.

"Once we will have saturated the Americas we already have offers for Thailand, China, Europe and India."

And Robin has no plans to slow down. His goal, he said, is to franchise the company so that the label on drinks produced in Trinidad, for example, will read: ' Product of Trinidad & Tobago produced under licence of Benjo's Limited of Dominica'.

Today, Benjo's Seamoss is worth an estimated US$100 million. Robin desire is that it contributes a lot more to Dominica's economy, and not just in the direct employment it provides.

"Benjo's Seamoss has the potential to transform agriculture and agro-processing in Dominica," Robin told The Sun. "I will see to it."

For the past two decades Dominicans have laid claim to Benjo's Seamoss. They see it as their very own. However, today, this product that was born right here, belongs to the world. Just check the label.