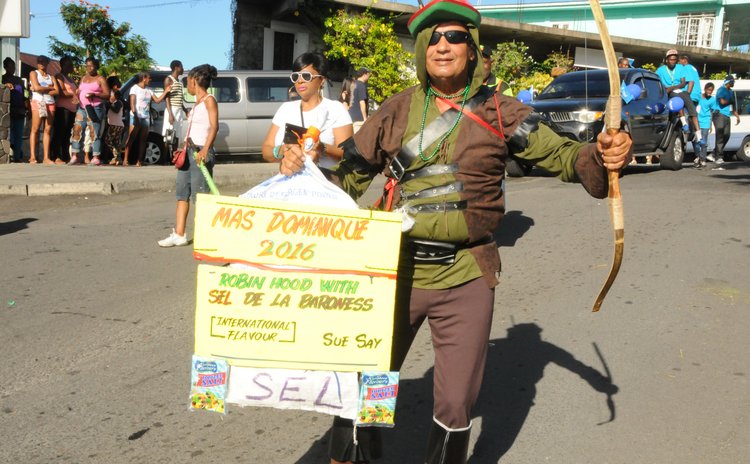 Carnival precedes Lent and so this final article on the aftermath of carnival takes a look at what makes carnival fun. When we speak of fun, we talk of clean fun; no drunkenness, pelting of bottles, stones, swearing, nudity, and the like. After all that's what true carnival is all about!

There are many who just "wash their feet and come" but there are others like the calypsonians, those involved in pageantry and costume building who use their art to tell a story, to document history and events of the times.

A professor says that one does not have to read any history text book or newspaper documentary or commentary to get a feel of the development of our region. Rather that picture can best be reflected in Calypso and the costume builder.

Well, we know too well of people like the Darnley Guye, Liverpool, Clarence Douglas, Alwin Bully, the illustrious Thunderbirds band and others who parade and bring life, colour and pageantry annually to our city streets but what of the " Undisputed King of the Road" Andy Carter?

For 15 years he has dominated and won the individual costume top prize and just keeps going on and on since 1996. He was only beaten on two occasions since his first appearance in jest as Al Masari in Town. However, according to Andy it was in 1998 when he paraded as the Last Arawak (ironically in the same year King Hunter won his first crown with Carib Bacchanal) that he began taking this pastime seriously. Then one after the other, themes as Retired Chief; West Indies Captain Padams; Osama Bin Laden; Billy the Elite Umpire; Incredible Hulk; Sharon got a Hotdog in her Mouth; Just come for de Rum and de Party; Robin Hood; Online; Bishop & Pope and even a Thunderbirds King of the Band title in 2012.

Andy's costume and art is not only limited to the streets of Roseau but the Calypso stage where he has portrayed several characters on stage for renowned calypsonians over decades. As an ardent cricket fan, commentator, and leading lawn tennis promoter/trainer, he has also ventured on the field of play as a mascot of sorts on a few occasions.

One may think it's just fun and costume and revelry, but it's more than this as the designs, created and worn by Andy Carter are all stories and can be traced back to some of the challenges the country faced as in "Politicians Playing Games" which he presented with Ludo, darts, dice; the age of technology in "On Line"; Billy Doctrove's rise to " Elite Umpire" status; the demise of the West Indies team in " Padams'; the Rise and Fall of Osama and even the changing of the police guard in "Retired Chief" - police Commissioner Blanchard; it's all a history lesson really!

Next year, Andy plans to display a number of his costumes via a reunion with the friends he grew up with in his lane in Goodwill before residing in High Street and now, River Street.

Meanwhile, pan is making some serious moves to rise to prominence once again with the revamped pan association and leadership from pannist Amanda Lawrence and a small group of dedicated practitioners such as secretary / treasurer, Chad Zamore; Althea Blaize as PRO; Acting Chief Cultural Officer-Jacinta David; cultural officers Earlson Matthew and Gregory Rabess- both musicians.

The goals of the executive and members are to increase the number of pan players on island, to revive pan and form at least one new steel pan group this year and to create opportunity for pan tuning apprenticeship. In this connection the president revealed on Rhythm & Rhyme on Vibes radio that the RIC pan group sponsored by Norris Prevost is expected to make a return.

It was noted that since the demise of Allan Jon Baptiste, Eddy Andre, the illness of Wilfred Pancho Jno Baptiste, and the unavailability of ace pannist Pious Jno Baptiste and Dave Winston who tutored at the Old Mill (due to employment on Caribbean Cruise), there has been a dearth of trainers who could be relied upon.

May also heralds the third cricket test match between Pakistan and West indies and the National Lotteries has put forward a proposal to the Pan Association to construct a National Pan Orchestra which would play for such National Events commencing from the Pakistan tour to Reunion 2018 and beyond. Wadix Charles and Calvin Esprit who represented Mr. White of the National lotteries, pledged their support for such future activities.

The meeting revealed that "Pan in the neck" is one of the activities supported by the Division of Culture and the Division's is to rally for prime time to be allotted for performances in Creole in the Park. A standard fee of no less than $250 per hour was suggested for pan engagements and it was further suggested that pan players should see to have their own events as much as possible where they have more control and not be just slotted in at the convenience of other activities.