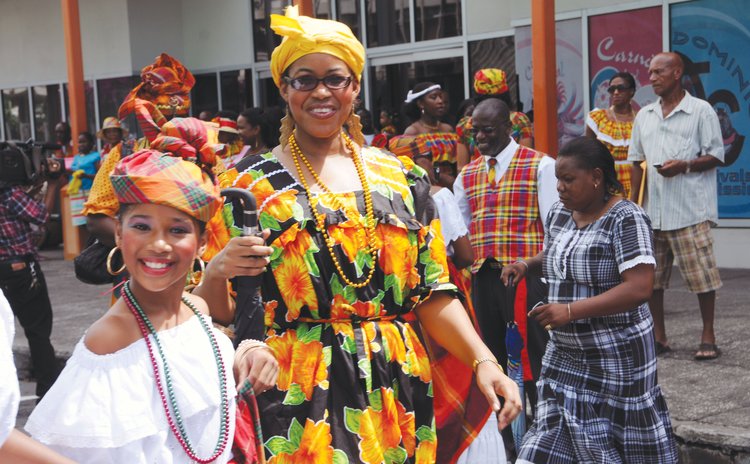 Part of the 2013 National Dress Parade
By Ian Jackson

Dominica is in full gear towards the observance of political independence after hundreds heeded the annual call by the Ministry of Culture through the Chief Cultural Officer to raise flags on Flag Day representing love and patriotism for "My Love, my Home, my Dominica".

We are celebrating forty years of the sweat and toil of our fathers such as Edward Oliver LeBlanc, Patrick John and mothers Cissy Cauderion, Ma Tutu, Jean Lawrence; cultural stalwarts in Alwin Bully, Ray Lawrence, Lawrence Brumant, Exile One, Grammax and hundreds more.

Let us remember our two most renowned leaders in Dame Mary Eugenia Charles and Roosevelt Skerrit; our foresters Chris Maximae, Arlington James; farmers Witnel Louis and Clem Ferreira who were abundant producers when Dominica was known as the food basket of the Caribbean. Our dedicated nurses and doctors- medical doctors Sorhaindo, Grell, Etienne, McIntyre; matron Dorival, Sisters Caines and Wilson; our distinguished religious leaders - Reverend Phillip Potter, Bishops Bowers and Daniel. Indeed this country is blessed with natural and man-made diversity but we have been cursed with hurricanes and political unrest such as strikes, the era of the Dread Act, coups and the like.

While we rightly celebrate all politics, political talk show rhetoric at this time should pause and look at the gains we have made as a people. Step back and if you are old enough see strides we have made in infrastructural development, roads, communications and education. One cannot deny the welcoming presence of the National Stadium, the link road, the E.O. Leblanc Highway, the birth of Bouyon music and its commanders at the front like Rah, Benji, Acer Banton along with Triple Kay and WCK. The links established with China in particular in developing some major projects is noted though we would want to see a similar injection into sustainable efforts in manufacturing. Many more Dominicans have access to university education than ever before. This is good.

Still we must be sober enough to admit that we are not producing as we did in the Seventies and Eighties whether in agriculture or industry. After 30 years Bouyon has not been recognized as a regional genre. We are short of medical specialists and equipment. We cannot be happy that we are the only major territory in the Caribbean without an international airport and the fact that our prowess in sports in the region in cricket, football or basketball is at its lowest. The fact that we have become a fragmented and apathetic people is an understatement. This is bad.

Nonetheless, we must celebrate the vibrancy of our culture and through the untiring work of Raymond Lawrence and the staff at the Division of Culture as well as the various groups all over the island who keep things going year after year. If it's one thing, it is this culture in dress, music, language and cuisine that has kept and preserved us as a people for decades. It's about the only thing that has remained constant in the Nature Island even when administrators fail to inject the required funds for proper facilities and amenities at the Arawak House of Culture or otherwise.

Wadix Charles and Marva Williams have proven that we don't need any Lucian or the like to run our festival. The World Creole Music Festival (WCMF) is home-grown and should all the time be administrated by home-grown folks who have the capability, understand the culture and pulse of the people.

So this weekend as we explode as no one else can in the region, commencing from Creole Day into the three nights of pulsating music, don't do anything silly (like an avoidable death on a scooter or some violent act) to spoil our joy. DO NOT REMOVE GOD FROM THE PICTURE. So as we count down to forty, let's salute all our living leaders, Patrick John, Oliver Seraphin, Edison James and Roosevelt Skerrit. It's our celebration, and no one should be left out. The life of this nation has just begun.