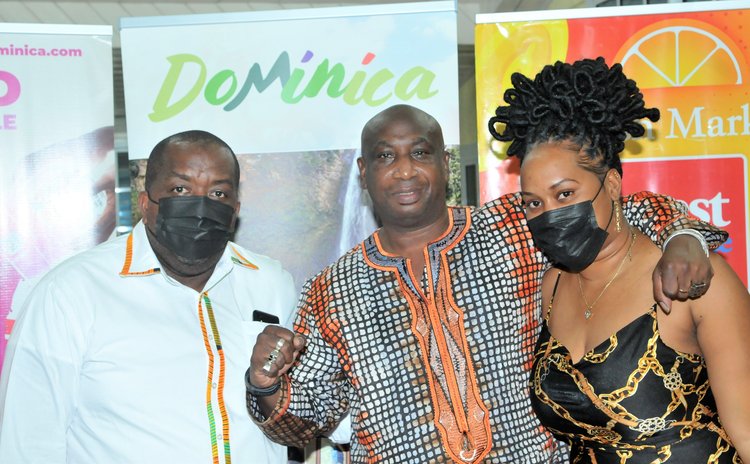 At the NMA 2022-Wadix Charles, centre and some of the award winners

An esteemed panel of six: Ian Jackson, Edgar Hunter, Gregory Rabess, Marlon Marie, Daryl Bobb, and the sole lady Maxine Esprit, structured, fine-tuned, and finally came up with Dominica's best and most deserving music awardees for the years 2020 and 2021, the years under review.

Sure enough, fans, friends, and the general public, and I dare say the artist himself or herself nominated; however, the heaviest weighting as it should be, was entrusted to the panel.

Readers should note that the first such music awards were held well over three decades ago and spearheaded by Dennis Joseph were artists as Jerry Lloyd, Raymond Lawrence, and yours respectfully received lifetime achievement awards. Then just about a decade later, another was organized in conjunction with Marpin TV. However, it has been a long and arduous 20 years of toil without formal recognition for our musicians. Yes, we can speak of Dice and Calypso or Tarina one of the region's Digicel rising star winners, and the exploits of Michele Henderson who won the CARICOM theme song contest as three of the signature successes for Dominica up to 2019, until Dada Lawrence stormed the entire region with the 'Famalay' production featuring Machel and Skinny Fabulous. These just about sums up the musical milestones, that we as Dominicans can be proud of over the last two decades.

Just as Ophelia who received her first award from outside of her country, we seem to be again destined to repeat the same, notwithstanding the Golden Drum or Sisserou Awards which has been bestowed on a few artists in the music industry as Pat Aaron and Nasio Fontaine just to name two.

Therefore, no praise is too much for Leroy Wadix Charles and Jerry Williams, his business partner, and Sa Kai Malade Inc in conjunction with Creole Heartbeat, for taking the initiative to ensure these Dominica Music Awards become a reality. Surely other partners came on board as did the government of Dominica, but these are the ventures one would love to see the ministry of culture take on, particularly in a time when musicians are among the sector who are suffering the most during the Covid-19 pandemic- a little mental booster since there is little to be gained financially. Maslow, one of the most famous social scientists, has written extensively and has come up with the motivational hierarchy of needs theory which ranks social, and esteem needs and how they can impact the individual.

The Dominica Music Awards is our Grammys and we should cherish it as such and not wait for every decade to remember the musician/artist. We cannot only remember them to help galvanize the crowds for the next election, or when they are selling 'coco sticks.' It is not enough to put monies at the AID Bank with terms we jolly well know they cannot access far less payback in this depressed economy. How about a one or two-year tax exemption for musicians, DJs, and other such entertainers. I was part of a team who made representation and received similar ease from Customs in Reunion '88, by the then PM Mary Eugenia Charles; so, it's not farfetched.

Keeping a balance musicians have a voice in AMP and ECCO, but many are inactive when it comes to their own business. Unprofessionalism still exists in some quarters by being tardy and even unkempt for engagements and too many never spend time to improve in a theoretical and rudimentary advance required to become experts at their craft.

In our deliberation for the best of the best in various categories, it was indeed a tedious and late-hour task that lasted for some four days as artists themselves were tardy in their submissions. It also required research and looking over with a critical eye at musical videos or recalling songs we were most familiar with. In some cases, rightfully, some of us stay away from judging categories on which we thought we did not have the expertise to pass judgment on. Obviously, Daryl Bobb voluntarily stayed away from Calypso as he was a contender. However, it would have helped if our overseas-based artists apprised and kept contact with DJs and radio stations as to what they were doing in terms of performances, production, or songwriting.

It was also noted that a top 40 countdown or something like what the Ted Daley's of the 70'-early 90 did, so one could keep track of songs and the impact via request and general appeal. Yes, it's the era of social media, of likes and hits, but one cannot downplay the effectiveness of radio as a tool that echoes the pulse of the people. The point was also raised by those empaneled that some effort must be made by the Dominica Calypso Association to define their art as to what constitutes Calypso or soon we may have a Bouyon Calypso Monarch. Just something to think about.

The Gospel section was probably the most challenging as not many Gospel artists recorded or could stage concerts during the period under review. One panelist drew a parallel between Gospel and Christianity, and so, for the purpose of this exercise Gospel was painted with a broad brush to include not just songs espousing Christianity but artists whose lyrics consistently tried to awaken mankind to some level of spiritual awakening: hence, the artist that the panel chose.

There may be things on the list (page 18) that you may question, but you can assure the panel is quite knowledgeable and its judgment, individually and collectively, was not at all very different in most cases; hence, I think they or should I say we, got it right.

So literally roll out the red carpet for Dominican musicians, DJs, singers, producers, music videographers, and songwriters deserving of awards for 2020-2021 and lifetime achievers. Let us applaud their efforts.