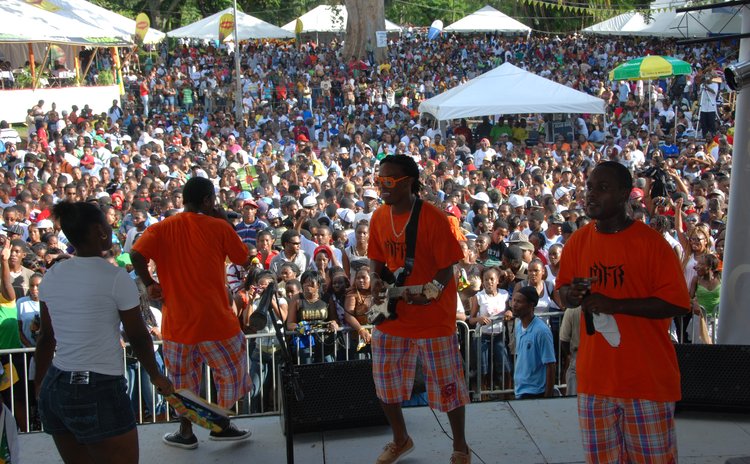 ("The following extract is based on empirical data from a study conducted five years ago for an MBA dissertation for the University of Leicester on the topic "Eco Tourism
and Music Entertainment: Examining music branding, to augment visitor experience in Dominica").

Music itself is not a guarantee to tourist participation. A random sample survey among tourist at leading night club facilities "Krazy Kokonuts" and "The Cove" in critiquing Dominica's music product expressed the following;

Similar sentiments have even been expressed by the French who can better relate to this new brand of Creole expression by a vast majority of youths in Dominica.

These youthful musicians play a Creole brand of music invented only two decades ago called "Bouyon",(refereed to the French as "Jump up" music) is a modern interpretation of the 1972 slower and more deliberate "Cadence" music which had embedded itself as a musical force in the 70s and 80s in the francophone countries.

"Bouyon" is predominantly fast and even quite a few mature locals find difficulty in dancing along. It would be then, counterproductive if the branding of Dominica's music to augment the destination's offerings does not actually deliver quality and the professionalism promised. Product development would then be aimed at improving the product to increase sales to the traditional French Caribbean markets with a view to market penetration in new and competitive ones.

Mainly musicians in the French departments, St Lucia, United States Virgin Islands, Antigua, British Virgin Islands, and the Leeward Islands and to a lesser extent Barbados and Trinidad have experimented with the Dominican Creole sound since its invention two decade ago. The product quality may just be retarding its development among other cultures. Hence this is an area which must be given urgent attention as for 50% of Dominica's 12 leading electronic groups, Bouyon is dominant, and more than likely what many tourists will be exposed to.

It has been over 25 years since anyone has been given a scholarship to study, at the degree level, music or any other aspect of the performing arts. This, I believe, is negatively impacting on sound quality, professionalism and general execution in the music industry. While authenticity of the traditional Creole sound may not require any formalized training but with respect to the contemporary Dominican sound of Bouyon and Cadence it is absolutely necessary to improve on the product quality particularly in light of the competing Reggae music from Jamaica.

In light of this competition a concerted effort should be made to embrace the signed cultural agreement with Cuba, China, France, Medgar College in the USA, and recently Venezuela by virtue of Dominica's ALBA membership, for scholarships to train our musicians. This training should be not only in musicianship and theory but in sound engineering, events management and marketing. It would require qualified music teachers at every school complimented with an extensive music in education programme, musical instruments etc. The cost of procuring such instruments to furnish our secondary schools is estimated to cost EC$5,000 per school. Ten such schools exist on the island.

(Note that presently the Government has established a fund at the AID bank and there has been some training by AMP in various aspects of music production and business in recent times).

I trust this article still has some relevance that musical practitioners, promoters, hoteliers, Ministry of Tourism, Ministry of Education and other stake holders can ponder on.