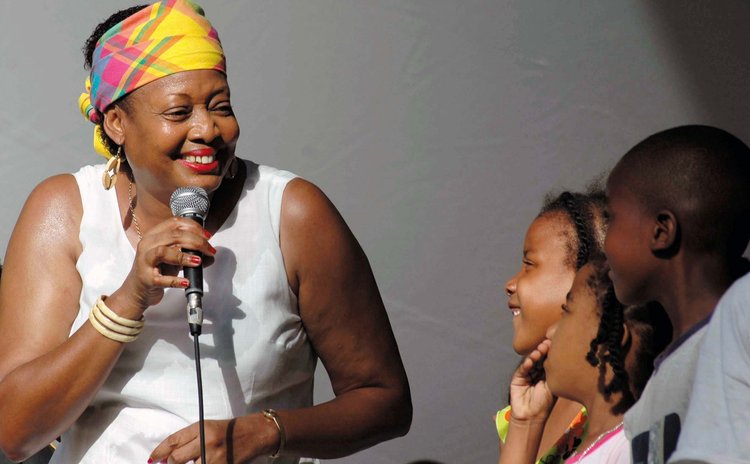 Ophelia performs with children at an earlier concert

Delivering brief remarks on Tuesday, Ophelia thanked Gordon Henderson for playing a major part in the early stages of her career.

"I was brought on to the scene by a gentleman, a big one…Gordon Henderson. I cannot not be grateful for him spending that first amount of money to allow me to do my first album," she said.

Ophelia added that Dominica's confidence in Cadence music has contributed to the annual staging of the World Creole Music Festival (WCMF).

She noted that the Cadence music is one of Dominica's many resources apart from the island's natural wonders and these assets must be used to draw people to the country.

The singer, popularly known as Dominica's Lady of Song, urged the public to hold on to Cadence music and Dominicans should not underestimate the gift that Cadencelypso has given Dominica.

Chairman of the Band Selection Committee, Leroy "Wadix" Charles, noted that prior to Ophelia's arrival on the Creole music scene that genre was male-dominated and male artistes were at the forefront of the industry.

Charles said when Ophelia was introduced to Creole music she took the French Antilles by storm and paved the way for other female artistes such as Michele Henderson.

"Her domination continues to be a treat to us in the Creole Music world whenever she walks in Martinique and Guadeloupe she is heralded," said Charles.

He also announced that Ophelia will be traveling with a DFC team to promote the festival especially in the French speaking islands.