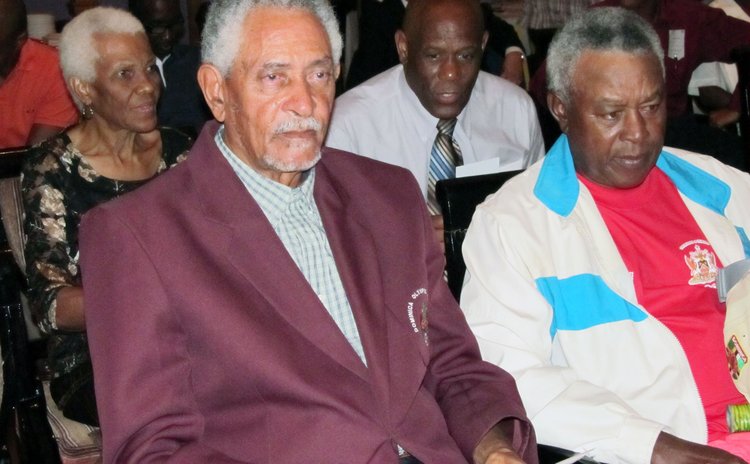 The Dominica Olympic Committee (DOC) held its inaugural recognition ceremony for unsung sport heroes at the Fort Young Hotel on Saturday evening May 11, 2013.

The two Dominican heroes selected were outstanding national cricketer and footballer of the 1950s and 1960s, Cecil Larocque, and coach of many sport disciplines and footballer/cricketer Reginald St Havis Shillingford.

In welcome and introductory remarks DOC president, Felix Wilson, noted that the founder of the Olympic Games in 1894 Pierre de Coubertin explained his reason for restoring the Games were to enable and strengthen sports, to ensure their independence and duration and thus enable them to better to fulfill the educational role in the modern world; for glorification of the individual athlete whose muscular activity is necessary for maintenance of the general spirit of competition.

Wilson added that the DOC was charged to preserve and protect the Olympic movement and its principles. So while the DOC was not only about sponsoring young people to travel overseas, it also needed to be benevolent, and so it settled on one who was always neatly dressed, a gentleman, very soft spoken and the ultimate sportsman.

St. H. Shillingford was not only a sports administrator and player, but coached netball, football, cricket and tennis. He is also a sports writer and commentator. He served as the first president of the DOC, and one year after its affiliation with the International Olympic Committee oversaw Dominica participating in the Atlanta Olympics in 1996.

Citations for these sporting heroes were given by DOC's Secretary Thomas Dorsett and Woodrow Lawrence, the latter being the first Dominican to compete in the Olympics, as a swimmer.

According to Wilson, the DOC award included $1,000 a plaque, two annual check-ups by a doctor of their choice, the payment of laboratory tests and medication and in the case of Larocque, a $200 hamper monthly for the rest of his life. In ending Wilson called on sports association to look out for and recognise those players who entertain us selflessly.

Speaking on his behalf and Larocque's, Shillingford, who was completely surprised by the award, noted that if he knew he was going to be honoured he would have asked his wife to be present.

Shillingford said he was happy to be linked alongside Cecil Larocque, a neighbour. He said Larocque's mother wanted her son to play cricket so that she would have less trouble from him at home. Eddie Robinson, a former national cricketer, saw the young Larocque in action and drafted him to play for Casuals cricket team.

Larocque had one of the most immaculate cover drives one would ever see. He was a brilliant fieldsman, and Shillingford stated, that one of the best catches he ever saw was taken by Larocque at slips off the bowling of former West Indies fast bowler Grayson Shillingford. Larocque also bowled slow and broke many a partnership in Windward Islands cricket. He was elevated to the Windward Islands cricket team towards the end of his playing days. As a footballer, he played as an inside forward.