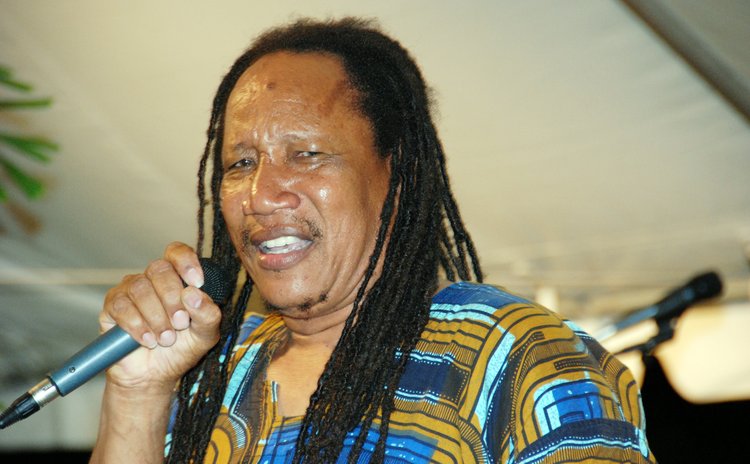 Ras Mo at the 2008 Literary Festival
By Ian Jackson

For a cast with some of the best paid actors, approximately $24 per hour, Lifetime movies (LMN) presents the most ridiculously repetitive plots ever.

Almost every move is anticipated, the endings are the same fairy tale, live-happily-ever-after. There is always a psycho or a kidnapping, or a marital situation where a man is always cheating or someone is being watched, a home is bugged, people continuously die by being pushed down steps and crooks who are knocked out always come back.

Almost nothing is left for the imagination because you already know what it's all about- the ladies as the winners fighting for justice in a man's world; psychos who have crushes which cause them to stalk and seek revenge for the most trivial things, which happened in their past, is perhaps the most popular theme. Before the movie, punctuated by numerous advertising spots, ends viewers already know how it's all going to end up.

One gets a little reprieve from the cliché when a movie is made from some real event that made the news in the USA such as the O.J. Simpson saga. I know this because unfortunately I am a fan. I think it is because there is very little by way of movies to see on television these days as the service providers have ensured that you are limited to just a couple while they are quick to remind you in more than two thirds of the channels that you have not subscribed.

The Dominican consumer is then forced to get creative with all sorts of devices- smart boxes, fire stick and the like, so as to move away from the monotony of Lifetime or Steve Harvey and other game shows.

The drama of a Trump White House also provides some entertainment. For the young ladies, a little love and Hip hop, Hollywood Housewives and in recent times I found some insightful documentaries and themes addressed on Oprah Winfrey's Network, for most but still for most guys its sports- basketball or Premier League football and game's over, as local content is sadly lacking.

Imagine nowadays a television ironically is used to tune on to radio talk shows, death announcements, DBS news, and music. No local documentaries or features are represented such as the Bagatelle disaster or even the most recent phenomena at Soufriere far less for the 20th anniversary of the death of the Hon. Rosie Douglas. It's all about Maria and we try our best not to go beyond this.

So many national issues which could be documented or featured such as on cancer, the hike in crime, education in this COVID environment, issues surrounding elections, the destruction of the former Jean Rhys home, the disconnect between the Ministry of Health which advocates social distancing on one hand, while Education allows students to sit side by side in our schools forcing just about the only school who followed that protocol to follow suit, the SMA.

What is the role I ask of our television stations today? There are no "What About" shows or discussions and debates of the 80's or 90s nor are there any "Dance DA" programmes which showcased our local talents. As a people can we just be brought up on a diet of what is beamed to us from the US? What are the implications for our culture? Today I actually hear children talk and mimic cartoon characters- a false sense of value. Where are the stories of Lawrence Brumant or the poetry of Ras Mo? OK, so why can't we feature today's stars like Michele Henderson, why can't we go into Cornel's Imperial Studios and talk to him about the magic of music that he creates there? A documentary on Bouyon is something that can be improved on from what Raymond Lawrence began. Do we have footage of the making or the restoration of the Cabrits? What are the images we are leaving behind for the next generation? DBS is a museum of artifacts, documentaries, interviews, music and I am aware a lot has gotten lost due to the passage of time, disasters and poor storage. Who is managing the hundreds of reels of tapes and transforming them to a modern more durable form from the reel to digital? Or are we allowing or culture and things that matter to disappear as the Kalinago language?

As corporate businesses, Digicel and Flow who have the technical means must see it as part of their duty to establish departments within their establishment to research and document as part of their social responsibility. It is not enough to just sponsor activities but this country has its own history which we must store and preserve for generations to come.