Dominica last Week: top five stories you may have missed 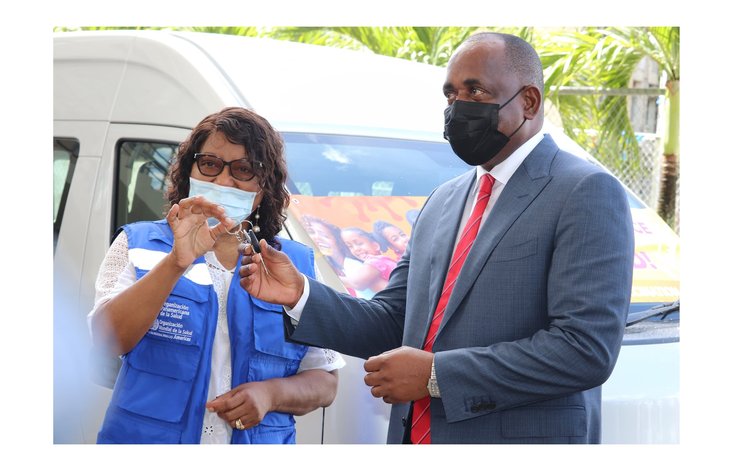 The doctor and the PM- PAHO gives keys to vehicles

Once again, Dominica has received a significant donation from the Pan American Health Organisation (PAHO) to assist with its fight against COVID-19. Last week, the organization donated two buses, seven portable computers, ice packs and vaccine carriers, 20 nebulizers, 20 pulse oximeters, 7,500 Personal Protective Equipment (PPEs), 1 GeneXpert machine, and 30,000 Polymerase Chain Reaction (PCR) kits to the country. As stated during the handing over ceremony on November 12, the donated buses will help Dominica expand its COVID-19 vaccination outreach, while the portable computers will be used for immunization surveillance and registry. Dominica-born PAHO Director Carissa F. Etienne, during her address, noted the impact of the virus on the economy, health sector, and lives of the general public. She added that this donation would prove to be substantial for the island by strengthening its health system.

A 27-year old has been charged for one of the two murders which occurred in Marigot earlier this month. Damali James, of Northend Marigot, is now remanded in custody at the Dominica State Prison following his appearance before Magistrate Bernard Pacquette at the Wesley Magistrate court on November 12, 2021, where the charge of murder was read to him. It is alleged that on November 5, 2021, in Four Road Marigot he did murder 26-year-old Dianer Chevor Henry. According to initial information from the police, the alleged murder occurred following an altercation between the deceased and the accused. Following the incident, James was hospitalized for a few days then released into police custody. Since murder is an indictable offense– expected to be tried in the High Court before a judge and jury– James was not required to enter a plea. At the hearing, attorney-at-law Joshua Francis, who was holding papers for the law Chambers of Dyer & Dyer, requested bail but Magistrate Pacquette said he had no jurisdiction to grant the request. The attorney argued that under the new Bail Act, a magistrate can entertain the application, but magistrate Pacquette disagreed. James was remanded and the matter was adjourned to March 9, 2022, for Preliminary Inquiry (PI) to determine if there is enough evidence for the case to be heard at the High Court. Meanwhile, the police say their investigation into another killing incident that claimed the life of Sherwin Alcendor on November 3, 2021, continues.

The Dominica Police Force (CDPF) has launched an investigation into an alleged suicide in the community of Grand Bay. According to Assistant Superintendent of Police, George Theophile, the lifeless body of 29-year-old Lestron Henderson of Ravine Banane, Grand Bay, was found in his one-bedroom dwelling about 1:00 p.m. on November 10, 2021. At the time of the discovery, the deceased was hanging from the roof of his house with an electrical cord tied around his neck. Theophile further reported that Henderson was pronounced dead on the scene by a medical practitioner and his body was later transported to a funeral home pending a post mortem.

Trinidadian national Kimberly King is Dominica's new Destination Marketing Manager. King, who joined the team at the Ministry of Tourism International Transport and Maritime Initiatives and Discover Dominica Authority (DDA) last month brings a wealth of experience to the team, having served in various capacities within the private sector from a base in Trinidad as well as in several other OECS islands. According to a DDA press release, King will provide leadership oversight in implementing the destination's marketing plans to help the ministry realize its goal of significantly growing visitor arrivals. She holds a master's degree in marketing from The University of the West Indies and has over 18 years of experience in the tourism industry.

The Climate Resilience Execution Agency for Dominica (CREAD), has signed a Memorandum of Understanding (MOU) with Kenesjay Green Limited of Trinidad and Tobago for Green Hydrogen Industrialization (Low Carbon Development). The MOU was signed by CREAD Chief Executive Officer (CEO), Ambassador Francine Baron, and Chairman of Kenesjay Green Limited Phillip Julian, in Glasgow, Scotland. While expressing his gratitude for the opportunity to work with the organization, Julian noted that together, he believes that CREAD and Kenesjay Green can represent an important demonstration of regional unity and integration, "something that the Caribbean region has to embrace and accelerate." Meanwhile, Baron said the signing of this MOU with Kenesjay Green will identify some important bankable projects that would lend themselves to investment which could also lead to the economic diversification of Dominica. Kenesjay Green Limited (KGL) is a sustainable energy firm based in Trinidad and Tobago. The company is focused on the transformation and de-carbonization of existing brownfield energy-based industries in the region, and the 'greening' of new industrial 'greenfield' projects.