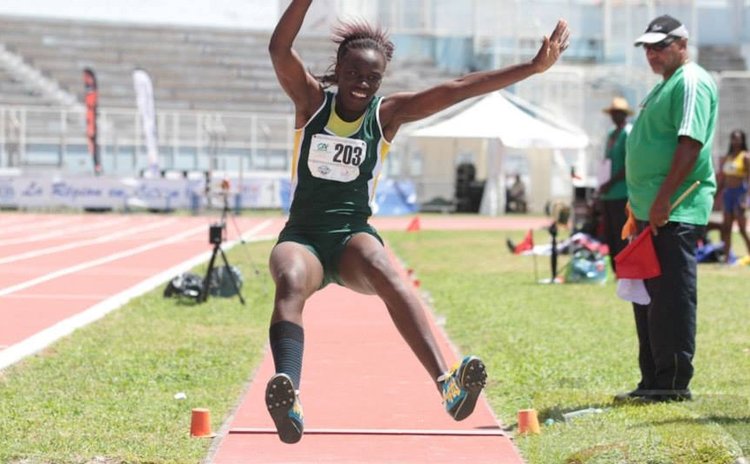 Dominica captured two medals at the 43rd Junior CARIFTA Games in Martinique at the Easter weekend, and the quality of these medals, gold, makes it Dominica's best showing at those games ever since entering way back in 1985 when Bruce Phillip and Steve Agar won silver medals in boys Under-20 400m and 5,000m respectively.

Dominica has had a couple years since where the team garnered four medals in 2011 and 2013, but it is the first time ever that Dominica left the Games with two gold medals.

Shanee Angol took gold in the new girls' U-18 age group in the javelin throw with 49.66 metres for a new CARIFTA Games record. She beat Barbadian Hayley Matthews (43.170m) and Caymanian Daneliz Thomas (39.59).

One year before Shanee had set a time at the Games in the girls' U-17 javelin throw. She also won a bronze medal in that event in 2012.

Chelsey Linton was the other gold medal winner. Chelsey became the first athlete to win the girls' U-20 heptathlon (seven events) gold medal, and establish a Carifta record with 4,648 points. Following in her wake were Janel Fullerton of Jamaica with 4,588 points and Miquel Roach of The Bahamas with 4,365 points.

Chelsey's first CARIFTA Games medal was silver for javelin throw in 2011. She went on to win bronze in the girls' open pentathlon (five events) in 2013, and we already know catapulted to number one in the heptathlon in 2014.

The achievements of Shanee and Chelsey have seen Dominica at a high of 13th among 26 countries in the Junior CARIFTA Games ratings with 39 medals (10g, 14s. 15b).

Congratulation also to Judah Corriette who clocked 1:59.26 minutes for a new Dominica youth record on his way to the finals of the U-18 800m; and Camron Carbon who finished seventh in the U-18 3000m. Dominica participated in the U-18 4x400m relay for the first time.