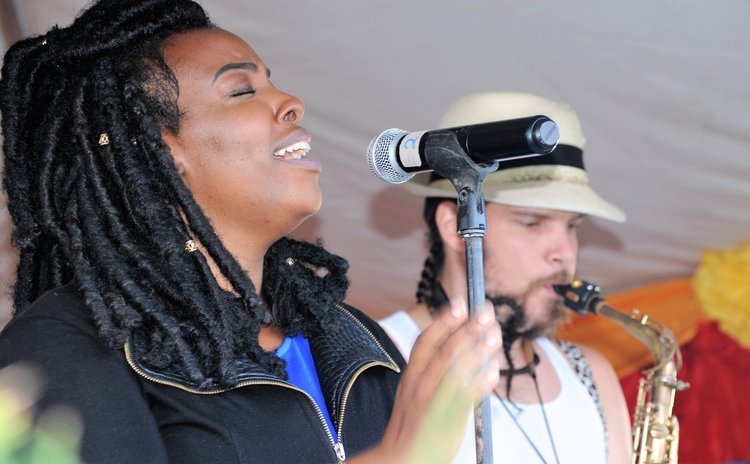 Some 3,000 patrons congregated at the 9th Jazz 'n Creole musical festival that has grown over time to be a spectacular event. The groups of Pan in Harmony, Stars Combo led by Peter Letang and Xtacy, who finally brought down the curtains, all had memorably performances. But it was the headlining acts of our Princess of Song, Michele Henderson and Xavier Strings, which really were fascinating.

For the second year in succession Dominica's Princess of Song stole the spotlight with professionalism, a well-rehearsed and skillful group of musicians, varied repertoire and powerful vocal execution. Michele Henderson, easily one of the most versatile and profound artiste in this region and an international act by any standard, represented Jazzy expressions, Soul, Cadence, Folk and presented a tribute to Prince ( Purple Rain) and medley by one of her icons, Stevie Wonder, which really stunned the audience.

One woman who stood close by stated: "But Michele getting better and better every year, man!"

She was sensational, and I felt proud that Dominica could have someone of such talent and acclaim since the likes of Exile One, Grammax, Ophelia and more recently Nasio.

Even without infusing French musicians in her backing accompaniment, as is a staple of most Michele's big shows, the local backing-group of Jerry, Junior, Leon and company was fantastic in all departments.

This must have been a hard act to follow for the sisters from TNT, Xavier Strings. They started cautiously, I thought, feeling out the patrons with some Jazzy and classics. For me, what was sensational about the sisters was their taking of a traditionally classical instrument, which is normally presented with conductors, and made it Caribbean, with their dance choreography and flair. The harmonization of their violin was brilliant as they stepped up the pace with songs representative of slavery, old Calypso from Sparrow and Kitchener and on to popular Reggae numbers.

A vocal attempt at some well-known tracks of the soon-to-be-released- from-prison Buju Banton, probably was the weakest link in their repertoire, notwithstanding the singalong audience. However, when the duo broke into the more traditional Afro Caribbean and current TNT Soca hits with the violin for which they are renowned, the venue went ablaze. The only local composition "Ani bi yo love" was a hit worth doing twice even as they left the stage to intermingle with patrons who were by this time in frenzy. In spite a few minor technical and music co- ordination glitches with their backing trio of musicians, they represented well with versatility, dexterity and did it all, with a smile.

If the festival was great then the setting itself must be considered to be one of the headliners of the event; tranquil and romantic, steeped in history, cobblestone relics and beauty, overlooking the Atlantic where canons loom in defense of a country, a Fort, is now the home of the Jazz & Creole. It was built some 250 years ago and recently renovated under the watchful supervision of historian Dr. Lennox Honychurch.

It is obvious that patrons do not just come to the Jazz 'n Creole festival for a fantastic show alone but to mingle, socialize, feel the Atlantic breeze in the high elevation of Fort Shirley, to be part of the breath- taking ambience, and immerse oneself in food and drink. This is why the Ministry of Tourism must maintain such a venue because it is unique in these parts.

I must also tip my hat, though I am not wearing one, to the organizers as the actual execution of the show represented a sense of order and preparatory work, from the bus shuttle service, the clear demarcation for various levels of patrons enforced by the police at the grounds. The stage management was also creditable. Certainly, like the festival, the organizational capacity has grown and what is left to be achieved is greater marketing, more appealing international acts, and the creation of space and improved accommodation as the Minister of Tourism has alluded to even as the festival peaks.

I am tempted to rechristen the event Creole and Jazz instead of Jazz 'n Creole as the Creole aspect over the years has proven to be the dominant factor. Nevertheless, I guess for marketing purposes and not to be confused with the WCMF, a jazzy creole inflection is quite in order. The new acting festival director, with the staff of the DFC and Discover Dominica can take a bow for a well-executed event.