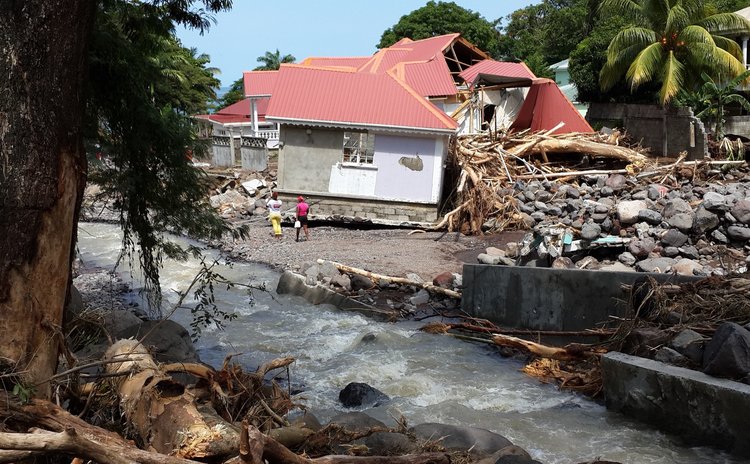 House at Checkhall damaged by river

In last week's article "Lessons from Erika", Severin McKenzie suggested that contributing factors related to the damage at Check Hall should be investigated and in particular, the knock-on-effect of the land fill at Antrim.

In 2009 millions of tons of clay from Red Gulley were dumped alongside the road at Antrim. Regardless of the fact that the land was considered sensitive, there was no environmental impact assessment beforehand. The rational of those involved was that the fill would support and stabilize the road. In point of fact, it did the opposite.

The land that rises above Antrim to the heights of Cockrane drains, not above ground, but far beneath the earth's surface. The weight of the land fill effectively choked the underground water courses. Consequently, as soon as there was heavy rainfall water pressure began to push the land below the road into the river. Huge sections of the river bank collapsed. During the rainfall from Ophelia in 2011 the slides into the river briefly created a dam and the resulting surge of water contributed to the collapse of the old works (Warehouse) at Check Hall.

It is claimed that land movement at Antrim has been occurring for a very long time due to inherent instability. However, it can be argued that the instability has been triggered by the works of man and not by a fault with nature.

Early in the last century the Imperial Road was cut along the steep hillside at Antrim. Inevitably, cutting and filling along a steep hillside will cause a certain amount of instability. Until the 1960's heavy road vehicles were few and far between but since that date the frequency and tonnage of vehicles increased considerably. Nevertheless, the road stood up remarkably well with only a few instances of slides directly above the road and none below the road.

It was only after the placement of spoil from Red Gulley that significant land movement occurred at Antrim and it is restricted to the area between the road and the river. I drove along the road a few hours after the 2004 earthquake and there was no landslide or rock-fall. Even more significant is the fact that the rains from Erika caused no landslides on the hillside above the road. The relatively minor one that did occur was alongside the road. Likewise, there were no landslides on the Springfield Estate at the other side of the valley.

The man-made instability between the road and the river at Antrim continues to presents an insurmountable problem. Before daylight on the day of Tropical Storm Erika we heard the roar of two large landslides along the river. The slides very likely caused the river to briefly dam (as we visibly saw happen in 2011) and hence the surges of water that contributed to the significant damage at Check Hall.