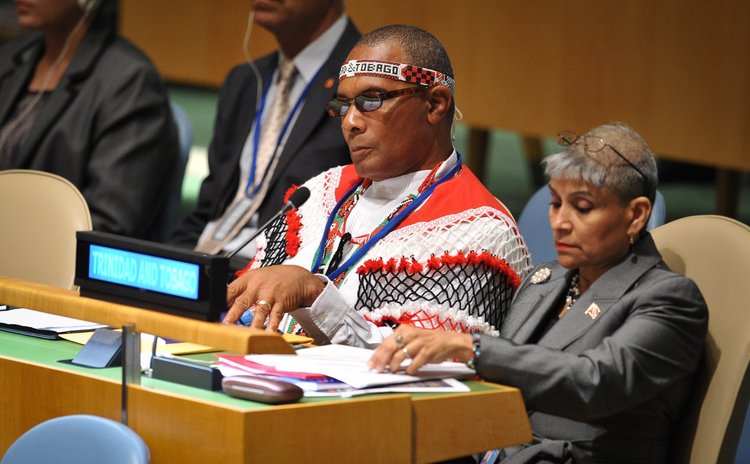 UNITED NATIONS, Sept. 23 (Xinhua/Sun) -- The first-ever World Conference on Indigenous Peoples on Tuesday concluded at the UN headquarters in New York, with a focus on protecting the rights of native peoples.

Convened as the first high-level plenary meeting of the UN General Assembly's 69th session, the two-day conference brought together over 1,000 indigenous and non-indigenous delegates to discuss the realization of their rights, including pursuing the objectives of the UN Declaration on the Rights of Indigenous Peoples adopted in 2007.

The conference on Monday approved an outcome document strengthening the rights for more than 370 million indigenous people worldwide.

Addressing the closing session on Tuesday, President of the 193-member General Assembly Sam Kutesa called the outcome document "a balance" between the collective, inclusive action of the indigenous people and an agreement from the member states.

"I am convinced that its action-oriented provisions, when implemented, will bring about sweeping changes for current and future generations of indigenous peoples," Kutesa said, urging representatives to "do your part to keep the momentum of our discussions moving forward."

The outcome document also focuses on the rights of indigenous women and addresses the issue of violence against women, which Kutesa said "must be at the top of the agenda."

He noted as well references in the text to youth and the challenges they face, from the difficulty in sustaining indigenous languages to preserving traditional knowledge and ensuring sustainable livelihoods.

Menchu, a Guatemalan indigenous activist, said that for indigenous peoples, this week's events showed a sign of hope towards a "full life and not just survival."

"We have set an important precedent with regard to our rights. The dream is that it will allow us to have a prosperous life for all the peoples who have benefited by this day," Menchu said.

Also on Tuesday, the International Fund for Agricultural Development (IFAD) called for greater support to the economic and social empowerment of indigenous peoples.

"Unless we mainstream the rights of indigenous peoples, unless we are serious about their empowerment, unless we work with them as equal partners -- then any global development agenda we conceive will be a hollow exercise, empty because it will not reach the most disadvantaged," said IFAD President Kanayo Nwanze.

More than 120 heads of state and government, business, finance and civil society representatives attended the one-day summit which aimed to raise ambition, mobilize resources, and generate action towards a universal climate deal next year in Paris.