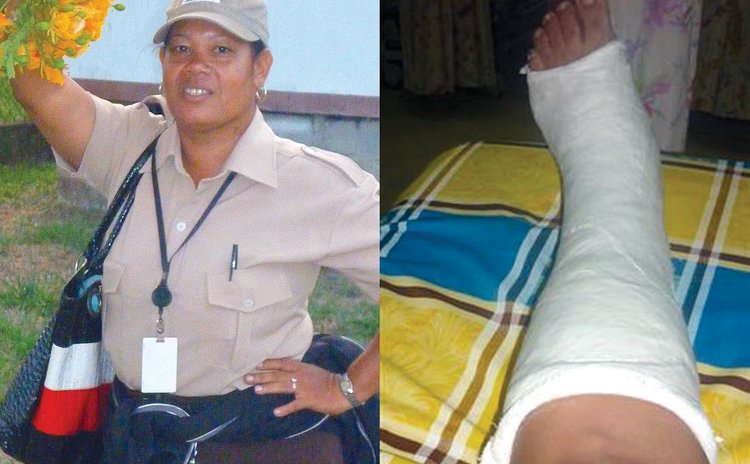 Lucia Esprit, a former security officer at the Dominica Air & Sea Port Authority (DASPA) wants justice after a piece of plywood struck her while she was on duty at the Woodbridge Bay Port three years ago.

"I was employed with DASPA from 2001 until I got into an accident on the job on June 23, 2012 where a piece of plywood fell from the top of a container. It fell on my left foot causing complete damage to the ligament in my left ankle. I had surgery done on the foot in 2014 and I have been on sick leave for 40 months. The matter is before the court and came up for hearing again in December 18th, 2015," Esprit said.

After the incident Esprit wrote a report; since then she claims that she is frustrated that DASPA, her employer, has refused to accept liability for the accident.

"I have been on sick leave from 2012 and in October I got a letter from Benoit Bardouille (DASPA's CEO) terminating my employment. My last report from Dr. Julian is clear, I will not be able to report for duty," Esprit stated.

But Esprit says Bardouille is passing all the blaming the owners of the container claiming that they had a contract and they failed to secure their container.

Esprit has been dismissed.

"I was paid for the first eight months after my accident and on March 26, 2013 Bardouille wrote me saying that I should make arrangement with the Dominica Social Security for further payments so I have been under DSS since then. I am not employed with (the owners of the container) so I am cut up in the centre," she said.

Meantime, the matter between Esprit and DASPA with Offshore Civil and Marine Inc. as ancillary defendant was heard by Justice Birnie Stephenson on December 17, 2015.

The Judge ordered the parties to attend mediation meetings with Joan Prevost or in the alternative, Celia Nicholas, on or before January 31, 2016.