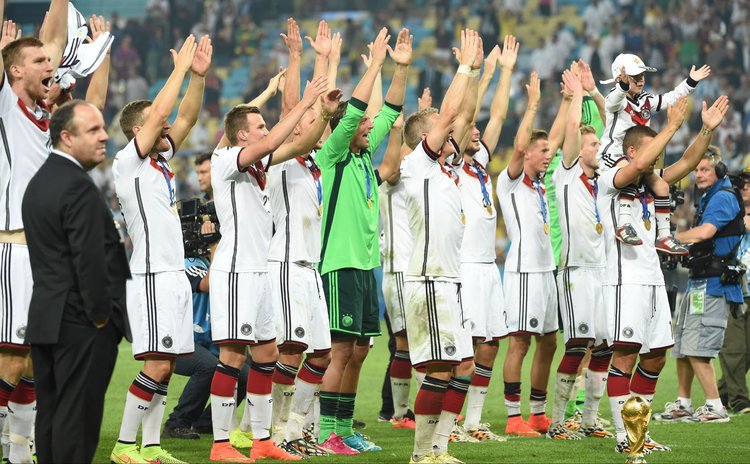 Mario Goetze's 113th-minute winner, which he fired past Sergio Romero after deftly controlling Andre Schurrle's cross with his chest, clinched Germany their fourth World Cup trophy and their first for 24 years.

For Argentina, who had not conceded in general play since the 2-2 draw with Nigeria on June 25, this was sporting heartbreak of the cruelest kind.

Not even the tireless efforts of Lionel Messi, awarded the Golden Ball for the tournament's best player, were enough to stop Joachim Loew's irrepressible team.

Goetze's moment of brilliance may have been the only difference between these two footballing giants on Sunday, but they took very different paths to the final.

Loew's side took advantage of Pepe's dismissal to rout Portugal 4-0 in their opening match in Salvador. If their next three matches - a 2-2 draw against Ghana, a 1-0 victory over the USA and a 2-1 win over Algeria in extra-time -- were not entirely convincing, Germany lifted another gear when the occasion demanded.

A tactically faultless 1-0 victory over France in the quarterfinals was followed by a 7-1 whitewash of Brazil in the semifinals.

Unlike Messi's Argentina, Neymar's Brazil and James Rodriguez's Colombia, Germany showed the fruits of building a team around a group, not an individual.

No one player was indispensable to Loew; they all were.

It was said that the total football philosophy copyrighted by Holland in 1974 relied on all 10 outfield players being comfortable in any position.

While the current German side can't quite boast that claim, the idea that every player should be equal and mutually interdependent is the same.

If Germany were a supremely refined machine bereft of a standout player, Argentina were a combative outfit whose underlying dependence on one man ultimately proved their undoing.

The Albiceleste began their World Cup campaign with Messi-inspired victories over Bosnia-Herzevovina, Iran and Nigeria.

It was a different Argentina that emerged in the knockout rounds.

Having been roundly pilloried for their defensive fragility, Alejandro Sabella's team began to look more compact and organized at the back.

Led by a defence that -- for the most part -- had Ezequiel Garay and Martin Demichelis at its core, the Albicelste kept clean sheets against Switzerland, Belgium and Holland en route to Sunday's final.

There is an argument that the team's reticence to adopt a possession-orientated, quick-passing game plan left Messi and Gonzalo Higuain increasingly isolated. But given the lack of dynamism and creativity at his disposal in midfield, Sabella was arguably left with no choice.

While Germany were tactically well-versed and Argentina reliant on individual skill, the third-placed Netherlands were somewhere in between.

Louis van Gaal's team secured third place with a 3-0 victory over a Brazil side still reeling from their capitulation to Germany four days earlier. Van Gaal, once a loyal disciple of total football, showed his pragmatism by changing his strategy to suit the team's needs.

But the team's dependence on Arjen Robben and Robin van Persie came into stark view in their semifinal defeat to Argentina.

While organized and almost error-free in defence, the Netherlands' plan to sit back - choking Messi of space and supply - was contingent on their star forward pair taking their opportunities. Those opportunities never came.

This, perhaps more than any previous World Cup, was one where tactical savvy and planning proved the difference.

Sadly for host nation Brazil, these elements were sorely missing.

The pre-tournament favorites advanced from the group stage without impressing before fortuitously overcoming Chile on penalties in the round of 16.

A 2-1 victory over Colombia in the quarterfinals was perhaps their best showing of the tournament. But it was also the match that ended the campaign of their most influential player, Neymar.

Selecao coach Luiz Felipe Scolari himself admitted before their first match that the 22-year-old pivotal to Brazil's hopes of lifting the World Cup winners trophy for a sixth time.

His fractured vertebra against Los Cafeteros robbed the Selecao of their chief attacking threat. Scolari's team were also without suspended captain Thiago Silva for the semifinal clash against Germany in Brasilia.

But few who witnessed the crushing 7-1 defeat to Germany at the Mane Garrincha stadium would say the pair could have made a difference.

After a bright opening, the hosts crumbled. They looked unrecognizable from the side that so comprehensively won last year's Confederations Cup by trouncing Spain 3-0 in the final.

The press widely described the defeat as a national humiliation equal to the Maracanazo, when Brazil lost to Uruguay in the 1950 World Cup decider.

Most lay the blame squarely on Scolari. Among the accusations were that he gave the players too much scope for self-expression, without a care for defensive discipline.

The statistics back up the claim; Brazil's tally of 14 goals conceded is a World Cup record.

There is also a common view that the team depended too much on Neymar. Former Selecao coach and 1994-winning captain Dunga said Brazil needed to look no further than Germany as an example of team play.

Brazil's inglorious exit has overshadowed the shock elimination of Spain. The defending champions' failure to progress beyond the group stage, which created initial shockwaves, is now a distant memory in the wake of Brazil's humiliation.

Luiz Suarez's four-month football ban for biting Italy's Giorgio Chiellini has also been shunted to the background. Despite the disappointments and moments of ignominy, this World Cup will also be remembered for the teams that exceeded expectations.

None surprised more than Colombia and Costa Rica, both of whom progressed to the tournament's quarterfinals for the first time.

Colombia were inspired by a vibrant posse of attackers led by the gifted Rodriguez, while Costa Rica reaped the benefits of coach Jorge Luis Pint's thorough organization.

So what will be considered the defining moment of this World Cup?

Even considering Brazil's capitulation and Suarez's moment of madness, it will be Goetze's sublime strike that broke an enthralling two-hour deadlock.

This was Germany's World Cup. A World Cup won with a combination of impeccable planning, team cohesion and a group of supremely talented players