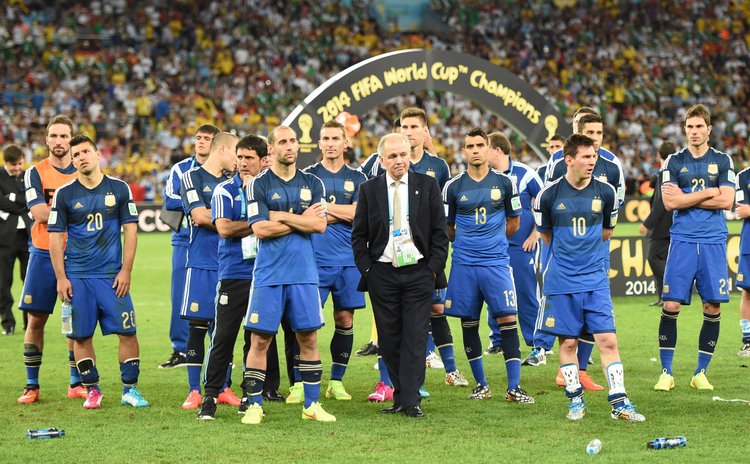 But Sabella said he could not fault his players for their commitment during the gripping two-hour battle.

"The dressing room is silent. It's the silence of a group of players who were like warriors," Sabella said at his post-match press conference.

"It was an even match. They are a great team and had better possession. They dominated play but we had clearer opportunities.

"They played their last match (against Brazil) a day before us and that could have made a difference. All I can do is congratulate my players for their great work and congratulate Germany."

Sabella, who last week announced his decision to step down after the World Cup, singled out Lionel Messi for praise.

The 27-year-old was awarded the Golden Ball for the tournament's best player, despite all of his four goals coming during the group stage.

"I think he deserved it. He played a great World Cup," Sabella said. "He was a major reason why we progressed as far as we did. The other players had an important role too, but he really deserved it."

Before the match some commentators claimed Messi needed to win the World Cup to be ranked alongside countryman Diego Maradona as one of football's greatest players.

Sabella said Sunday's result made no difference to the Barcelona forward's status.

"Lionel Messi is already in the pantheon of greats. He joined it a long time ago," Sabella said.

Despite Germany's dominance of possession, Argentina had their share of scoring chances.

Arguably the best of them fell to Gonzalo Higuain, who sent a first-half shot wide when he had only goalkeeper Manuel Neuer to beat.

"These matches are very close and when you have chances you have to score," Sabella said. "We lacked efficiency. But the players left their last drop of sweat on the pitch and I can ask for no more than that."