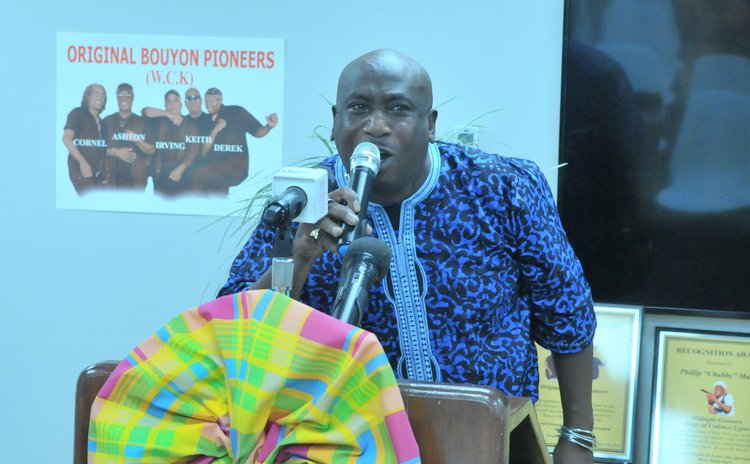 Wadix and Dr. Miguel are two DJ's that have elevated themselves from merely being just spinners of disc as in the old days of the Ted Daley's or BaBa's or Antigua's Sly J. They are entrepreneurs in the entertainment business and have been responsible for many of such activities on the Nature Island.

I have no answers as to why the Meritorious- Service-Award winner Leroy "Wadix" Charles was not given the post of Executive Director of the Dominica Festival Commission (DFC) at a time when we were searching beyond our shores because I cannot come up with a better or more effective promoter than Wadix.

If Wadix is number one on island then Miguel as a promoter must be number two not only because of his work with the telecoms company they both represent, but his ability also as a show organizer. His Mirror Entertainment is a registered company that has hosted many Reggae acts on island, the weekly Reggae on the Boardwalk and from time to time boat cruises.

Surely these two guys' insightfulness and innovativeness are often unheralded, but in a country like Dominica where funds are tight and night entertainment is sparse it takes a lot of commitment and drive to make things happen.

I reminisce on the successful attempts to create diversity by hosting the Oldie Goldie parties held at least twice annually to cater for the 40-and-over crowd at a variety of venues. As simple as it looks, it has given persons of the 60s and 70s a chance to unwind, dance, as opposed to prance, whether at Krazy Koconuts or the Strip.

The same can be echoed as Dr.Miguel has many times, unearthed his entrepreneurship spirit in fashioning numerous shows particularly in the Reggae Lover's Rock mode having hundreds dancing the night away.

Yes, I have patronized the shows a few times; they were well organized, and not a fight has marred any of the events over the past decade. Miguel Labadie's move from just being and announcer on the Nation's Station to a DJ and ace promoter on the island just as Leroy Charles has indeed reaped dividends if not financially but for the entertainment landscape.

Wadix, the senior who started his love affair for Creole music some 40 years ago, with Francis Ole, hence the name Wadicole has never stopped. What is more interesting is compared to many other spinners of discs is that he is a remarkable resource on the music, particularly French creole having lived in that country for many years. His knowledge extends to Calypso, Reggae and other genres- a walking music encyclopedia of sorts. His exuberance, explosive adjectives even as he closes out with his famous 'sa kai malade' – his company name, he has already influenced you to buy that ticket.

It is no wonder the telecoms giant did not have a choice but to look to these two advertisers as the best sellers of their product. Certainly they meet my admiration for venturing into the unknown and making a success out of it in a time where only bars and bar- be- que grills open up and other ventures seem to shut down.

It is not only in Dominica their skills are sought and from time to time they will be asked to host some event beyond our shores. It is obvious these gentlemen have created the necessary linkages regionally with a plethora of artists; who would think of reviving Eric Donaldson or recently staging a Mama Creole (celebrating Ophelia's achievements) and then follow it up with a Papa Creole somewhat resurrection and showing appreciation for Gordon and Chubby who never before shared a stage in Dominica.

It's never enough for this guy to just spin a disc or big up fans or give birthday greetings on their radio shows. Their time on radio is interjected with information on an artiste, human interest stories or Wadix may introduce a 'Champagne moment' or the Doctor, a battle or clash of songs to gauge the popularity and solicit interaction from the public or probably, just speak to a guest or two. This highlights the fact that they have researched and are knowledgeable. Whatever it is done is executed with skill and a level of professionalism.

Often these guys work in tandem and team up with long standing friends and compatriots as Mr. Mixx and more recently RS Digital. It's a skill which is perfected by practice; when to listen, when to interject, what song is best suited here to evoke the atmosphere required, how should I end my stint on radio or stage.

Well, that's where I think I should end Spotlight for this week, even as I once again acknowledge two of Dominica's best DJ's and promoters: Wadix and Dr. Miguel Labadie.