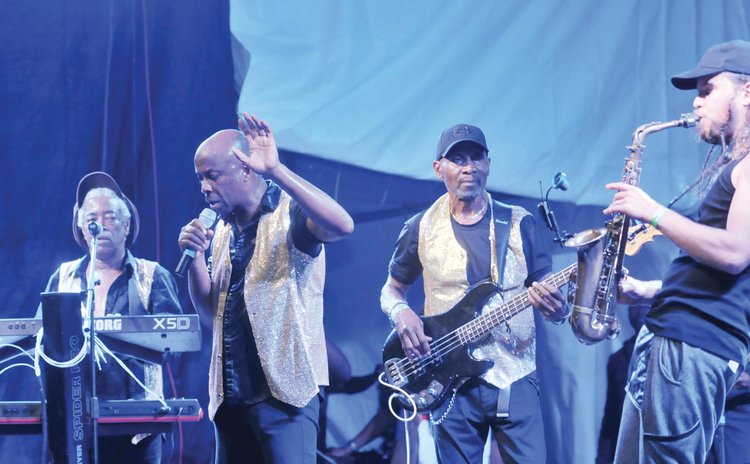 Exile One performs at the Papa Creole show

Oh wow, after the success of Mama Creole, the celebrations for 40 years of musical magic by Ophelia, Dominicans are excitedly looking forward to welcoming home, the man who created a revolution in Dominican music and sound. The artiste, music producer, founder of Exile One, creative genius and music entrepreneur of more than five glowing decades is coming back home to celebrate his 50 years in the music business with his people.

Gordon Henderson, a son of Zikak, Portsmouth, a student of St. Mary's Academy, a citizen of the world, the prodigious boy who would become the leader of a musical movement is celebrating 50 years in the music and entertainment business. And sure enough, the showbiz maestro, Wadix is putting together a grand home-coming fitting for the legend. The celebration in Dominica which is being promoted as "Papa Creole: a once in a lifetime Historic Concert" will include a massive show and concert featuring Gordon and his bandmates from Exile One, alongside Midnight Grovers, Halibut and the Original Bouyon Pioneers, at the Windsor Park Stadium Forecourt on Saturday 15th June, the day before Fathers' Day 2019. Like Mama Creole Festival, we are sure that every Dominican and music lover will embrace the opportunity to support this grand gesture by Wadix and the many partners and sponsors.

This will be a celebration of Gordon Henderson and his prowess as the leading exponent and creator of a music genre called Cadence-Lypso which would later have a huge influence and impact on other popular music in the Caribbean and especially on Creole music all across the globe. Gordon was, before the Cadence phenomenon, a child star, who in his early years sang Calypso at his alma mater, the St. Mary's Academy under the stage name of Mighty Bee. He would go on to found and lead the very popular Voltage Four alongside Anison Rabess, Oliver Cruickshank and Chris Francis. In 1970 he would move on to Guadeloupe to become the lead singer with the mighty popular Les Vikings of Guadeloupe and penned the hit song, "Love" which became a huge hit in Guadeloupe and throughout the Caribbean. Gordon's thirst for success and his desire to create music for his people and to inspire his and future generations to action through music would propel him to a new chapter, the creator of a new music genre.

In 1973, he invited a number of young Dominican musicians along with a Trinidadian and two Guadeloupeans to join him in the formation of Exile One and the pioneering of the new music genre. Cadence-lypso which Gordon describes as "a synthesis of Caribbean rhythmic patterns.. " incorporates elements of the various musical influences of the times was born out of the period of black consciousness and anti-colonial struggles by peoples of Africa and the Caribbean. The music was strongly influenced by the rich rhythms of Haitian music, the infectious Calypso rhythm of that period and influences from black music from the United States. But the music also reflected much of the prevailing struggles for self-determination and independence.

Cadence-lypso was indeed the embodiment of a people moving forward to a new dawn and a new awakening. Gordon captured the spirit and mood of the times in his many hit songs and his catalogue of music which is a truly magnificent story of the boy from Portsmouth and Dominica who strode on the world music stage traveling from Dominica to Guadeloupe and Martinique, Haiti, France, Africa, Islands of the Indian Ocean, French Guiana, United Kingdom and other European countries, United States, Canada, and so many other places. Today he is still making and playing music as if it was 1969 again.

"Papa Creole" is therefore a worthy designation to a creative genius and someone who has been able to interpret the mood and feelings of his people over these many decades, integrate the various strands and influences from the popular cultures and use his considerable talent and skills to mobilise a generation into self-belief and new found confidence. Gordon did not only create a musical genre, he brought Dominicans to their greater senses and sensibilities that they were worthy of making big contributions on the world stage, whether in the arts and culture, in sports and in science, religion and politics, and in public service. This was the period of the rise of Dominican cricketing and sporting excellence with star players like Val Felix, Clem John, Irvine and Grayson Shillingford, Norbert Phillip, Kaleb Laurent, Lockhart Sebastien and so many others; it was the time of the great leadership of Dr. Phillip Potter at the World Council of Churches; Dr. Phillip Boyd in the health field; Edward Oliver Leblanc, the father of the nation; Rosie Douglas who was coming back home to lead a new generation of men and women in the fight for national independence and self-determination; Dr. Lennox Honychurch and Dr. Bill "Para" Riviere who told the story of this nation and gave the people much to ponder on; and of course, of Alwin Bully, that great Dominican artiste and visionary, icon of the arts who would inspire many generations in theatre, dance, visual arts and literature.

Gordon was part of that movement which helped to lift Dominica and signal the start of a cultural awakening. Gordon has been for all of these 50 years, a true cultural ambassador who never boxed himself simply as an entertainer. He was more than that; he has been this larger than life figure who in many ways has been misunderstood, often even vilified for his strong stance on social and political issues and for his insistence on putting Dominica first. He loves his country and the region and continues to be an inspiration to the youth to use music and the arts to help transform themselves, their communities and country.

Gordon's music and his contribution to a modern Dominican aesthetics is probably under-valued and under-utilized. His tremendous contribution over these decades have for long been dismissed or have not been recognized as he should have been, although he did receive the Golden Drum Award and lifetime awards from the DFC and Cable & Wireless/FLOW for his contribution to music.

This is someone who is credited in world music for impacting new music in the Caribbean and the creole world but has hardly been given the due recognition especially in his own country. Cadence-lypso has had a strong influence on Zouk, Haitian Kompas, Soca and other genres of music. It is part of the continuum of the Cultural Revolution and a movement to give us a greater sense of identity and self-respect.

Gordon Henderson's music has transcended race, color, class or ethnicity or that insular island feeling which is so pervasive in our region. It has huge global appeal both for its strong and enduring lyrical content and but more so, for its creativity and its amazing quality. The music of Exile One is historically relevant to the generations and is a manifestation of Dominica's great contribution to Caribbean and world culture. The songs created over these decades, from Nou Travay Pou Anyen to Rosita, Diamant Creole, Jumbolo, to Fraiche and the many other popular Exile One songs, bring back a sense of nostalgia to the listener and help us to rediscover ourselves in the midst of a period of uncertainty, political and social divisions and inertia of all kinds.

Among his many other accomplishments and impacts on his island, was his leadership and pioneering role in the creation of the annual World Creole Music Festival in Dominica. Since 1997, the World Creole Music Festival has become a major fixture on the regional cultural calendar and one of the premiere music festivals in the Caribbean for its pure and authentic roots and originality. Papa Creole should help us not just celebrate Gordon for his tremendous contribution to the new Dominica but must help instill in us a sense of pride and a greater belief that we can accomplish much in spite of our small size, geography and economic and political circumstances. This is a moment to reflect on the need for unity of purpose and spirit and a call to action for building a more prosperous and dynamic nation.

Gordon will be sharing the stage on the Windsor Park Forecourt with other Papa Creole musical icons and great contributors to the musical experience. Phillip Chubby Mark is a musical institution and powerhouse who has himself given more than 50 years of service to the definition of the Dominican music. Cletus "Halibut" Abraham is a product of Belles Combo, and has become a leading light for Cadence-lypso music over the past few years. The Original WCK helped in advancing the work started by Gordon and Exile One and created Bouyon music as a true, authentic voice and a powerful rhythm that is today finding its own space and influencing other genres and musical styles especially in the Eastern Caribbean and the French West Indies.

We salute Gordon for his vision, his strength of character, his creativity and professionalism and his love for his homeland. It's up to this and future generations to use his work as a platform to move Dominican and creole music forward.

Let's join in the celebrations of more than 200 years of musical power and let's hail, Papa Creole for his sterling and worthwhile contribution to music and entertainment over these past five decades. Gordon is indeed a musical legend, worthy of celebration, worthy of emulation.

Hail to a music legend!