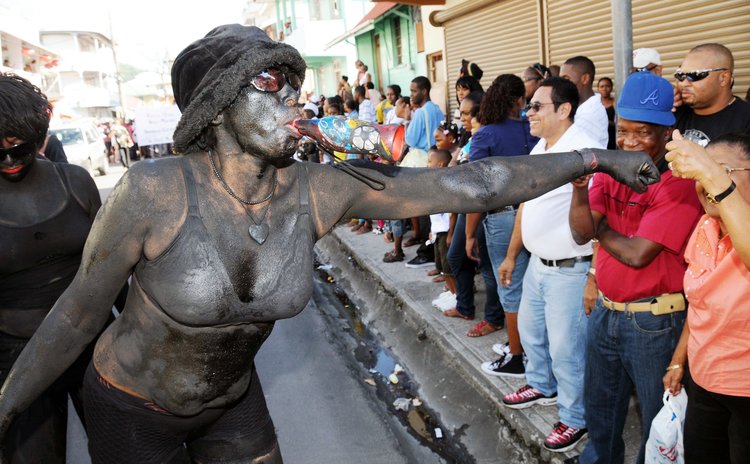 Vincentians have dubbed Vincy Mas the best in the region and they can do that. I have seen them all with exception of Trinidad and Tobago and the Spice Isle, Grenada, and Vincy Mas really should rank in the top five in enjoyment, participation, colour and organization.

I always maintain that if one does not travel he or she could be duped into believing that Dominica's carnival is the best or one of the best. However, the Dominica Festival Commission (DFC) is careful in their analysis; the DFC has settled for most original or spontaneous. By so doing the burden of organization and investment is lifted.

St. Vincent has a population of about 110,000 about 35,000 more than Dominica but judging from the involvement and general participation you would swear that their population is twice ours.

I must admit that our Calypso competitions are of a higher standard as most of the calypsonians have only one song of any merit making it rather easy for Queen Shernelle to walk away with the title. We beat them on quality but we can learn from the quantity and their general organization. The crowd attendance at the finals is just over 2,000, in my estimation, as Soca, which is the in-thing draws a crowd of over 10,000. Dominica remains the final bastions of the Kaiso art form, it would seem, in the world and we must be heralded for this.

However, the Calypso culture is big at the schools in Vincy-land, so much so they have semi- finals and apart from the Calypso competition the youth also have a category for Ragga and Power Soca as in Trinidad. Therefore, compared to the 8-12 juniors on display in Dominica they have well over 20 participants and this requires some sort of eliminations.

The music teachers in many of these schools serve as writers or arrangers or they commission specialists to do so enhancing the rivalry among students, parents and the general public. The burdens of all these shows are left to the Carnival Organizing Committee. In contrast, in Dominica the DCA holds the unique and progressive position of staging their own shows for decades while the Leo Club has assumed responsibility for the Junior Monarch competition.

The musical arrangement, particularly the brass, has an edge because St. Vincent practices specialization. Yes, they are big on arrangement and most bands do have brass men compared to Dominica which has only two- Stars and Serenade.

Nonetheless, the sound quality emanating from the speakers and general musicianship of the Stars in Dominica has to be complimented especially as two bands are employed by the ministry of culture in St Vincent to play for calypsonians. Hence, in the semis which consists of 22 calypsonians the workload is shared equally among the bands. A new band sets up during intermission for the other 11 calypsonians. So respect the Swinging Stars of Dominica.

Interestingly, the Calypso finals is also an opportunity to display and judge the king and queen of the band costume immediately after the Calypso-two-round competition, so you know that the show is going to end at about 4am the next day granted that the MCee do not provide the comic relief of Young Bull, Prosper or Double A.

The prize money is $25,000 and a vehicle; in Dominica it had been $20,000 for over two decades. However, it must be noted that the most significant difference is as follows: the strong tent structure that exist is used to get calypsonians in the semi- finals. They have seven tents, five of which are on mainland St. Vincent, one representing the Grenadines and one in the diaspora. Yes, the committees send judges overseas to judge the tent in the USA to select candidates for the semis. The best are chosen from the tents on island in their competitions and so they do not depend on a quarter finals to get the 20, or in their case, 22 for the semis.

On the streets elaborate costumes can be seen; the king and queen get separate prizes of $12,000 each and the band of the year can go anywhere up to $20,000. On showcase were 13 bands and all consisting of a children section with elaborate costumes, each accompanied by their individual sound system. They were no Moko Zombies, Black Devils or Ban Move which renders Dominican mas original and unique. Neither were there any gangs on parade. A subvention is paid by the government to all the Mas Tents to buy material for costumes most of which are purchased in Trinidad. The streets in Kingstown provided ample space and sidewalks to allow for the proper parading and display without interference by onlookers or camera men. Judging takes place in the Victoria Park where bands do a display on stage and also on the lengthy market street which in my estimation stretches from about Potterville to Newtown. They are judged on originality, form, story, participation, color and the like. The band are aware where the judging points are and so get into proper formation and prepare themselves to impress.

The road march was judged based on statistics rating to airplay just as the DCA have recently introduced. The registered bands with accompanying hi fi determine this. The veteran Luta after many years finally won with the power Soca 'Lego ting' with 161 rotations. Still I must also mention the popularity of 'Famaly' produced by our own Dada Lawrence.

There is no queen show for a few years now and Miss Caraval is out, due to poor attendance. At home kudos to the DFC who has managed to keep the queen show going as their biggest show for any season.

Results for all competition resulting from street parades are given within 48 hours and calypsonians and musicians would have received their monies as the government budgets with carnival celebrations in mind.