She produced many songs that exalted our nation 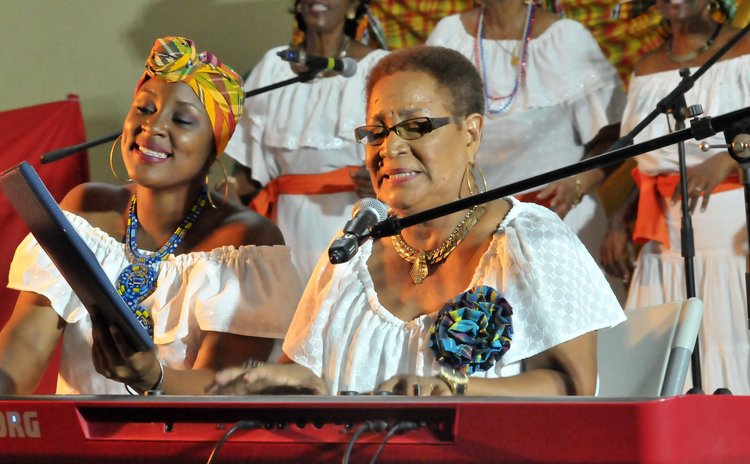 Every now and then, while going about her daily business, Dominican folk music icon Jean Lawrence- Mathurin will sing to herself one of her many compositions that continue to be so popular here, especially around independence time.

"Once in a while," she responded cheerily, when asked by The Sun if she ever sings her songs to herself.

It's hard to believe that songs such as Kai Voleurs, Dis Moin Ca, Pas Quittez Yo Prend Dominique and her favourite, Toute Ça En Dans Y, have survived nearly half a century, and enjoyed by generations, many of whom do not even know about Jean.

Jean's journey to folk music immortality began in the mid to late 1960s when the government began a thrust into forging the island's cultural identity. It formed the National Cultural and Arts Council to develop various aspects of culture, including poetry, dance, arts, and folk music.

"So they asked me if I could help with the folk singing thing," she said, her wonderfully engaging, likeable personality coming through even over the phone, even to someone who had never met or spoken to her before.

Of course, her foundation was built long before the call came around 1968. With an accomplished organist as her father and a singer as her mum – "she had a beautiful voice," Jean said of her mother – it was no surprise that she got involved at an early age. They had a piano at home on which she learned to play – she has since become an accomplished pianist and organist, and has been the director of music for the Catholic diocese of Antigua, which includes St Kitts and the British Virgin Islands, for many years.

Fifty-one years ago, in 1969, in keeping with the cultural thrust, Jean formed the folk group which was name The Siffleur Montagne Chorale after the local bird "with a beautiful, beautiful sound".

At first the group had no original material, limiting it to perform old Caribbean carnival songs with a Dominican folk flair. Recognising the deficit, Jean began to write, and in 1971, two years after The Siffleur Montagne Chorale was formed, they recorded their first album, Island Magic: Folk Songs of Dominica. Six of the eleven songs on the LP were written by Jean, three, including Pas Embété Moin, were traditional songs, with the remaining two written by other members of the group. The following year they released their second album which included song such as Ca ca Ye Ca, Lavinia, Avant Ou Quitte Moin and Moin Le Mort.

The many songs written by Jean over the years, including church songs, a wedding song, a Christmas song and a Creole mass which is still used in the Catholic church today, and was performed at a special tribute concert at the Goodwill Parish Hall on Wednesday 30 October in observance of the 50th anniversary of the founding of the folk group. The event was organised by the National Cultural Council and the cultural division.

The entire concert, all the songs performed at the concert were Jean's songs, explained Raymond Lawrence.

The event featured several performers, among them children and adult chorales and individuals. One of the main highlights was a performance by some of the original members of The Siffleur Montagne Chorale and its successor, the Dominica Folk Singers.

Jean Lawrence was the "manager, director, composer, arranger, singer and musician of The Siffleur Montagne Chorale," said Jennifer White, an original member of the now-defunct group. "She played the piano, guitar and the accordion."

Added Ms. White: "It is because of you, Jean, and The Siffleur Montagne Chorale that we were able present songs that exalted our nation and engendered in us a greater sense in being Dominican, songs that are enjoyed by so many people in so many places. Thanks to you and The Siffleur Montagne Chorale, Dominica has an incomparable repertoire of folk songs which remain popular after 50 years."

Jean's sister, Ursula Lawrence-Simon said: "Jean, we miss you. We missed you when you left Dominica. There was a void, there was a quiet at home. God gave you the natural talent and you used it magnificently."

Pearl Christian, the founder and former director of the Sixth Form Sisserou Singers, said Jean Lawrence Mathurin ignited her love for folk music when she attended the Convent High School where Jean Lawrence was the music teacher.

"I loved everything about Jean. She was kind, gentle and firm, confident, super-musical and so pretty to watch," Ms. Christian said.

However, she added that she, and many Dominicans, were heart-broken when Jean fell in love with and married an Antiguan, Alexis Mathurin.

"I-did-not-like-Alexis-Maturin," stressed Christian during her tribute presentation. "He was going to take Jean from us and my heart was breaking."

But when Pearl saw "how in love the couple were" her feelings towards Alexis changed somewhat.

"It was only when Jean declared that even if she left the shores of Dominica she promised to carry Dominica in her art always, I was able to embrace Alexis," Pearl said. "And true to her word from every place of residence-St. Lucia, Antigua- Jean kept churning out beautiful Dominican music."

Jean has been living in Antigua since 1972 with her Antiguan husband. She has become part of the fabric of the church in St. John's, as well as in St. Lucia where she lived for five years after her husband was transferred to Castries by British Airways for which he worked. She received a Meritorious Service award in 1971 for her work with young people and her contribution to music, and also a Golden Drum award in 1999. In 1994 she received an award by Pope John Paul II for her service to the Roman Catholic Church.

Amidst all of this she has remained humble, a character trait that is obvious to anyone with whom she interacts.

"Even though physically she's not in Dominica, culturally she has had an impact over the years and that's a tribute that Dominicans have given to her music," said her brother, Raymond.

"So I'm very proud that she's my sister. In a very unassuming and very humble way she has achieved all of that and has emerged as a Caribbean icon. So the tribute is timely and well-deserved because her music still lives on and is appreciated by all," Raymond stressed.

(The original article by Johnson JohnRose is updated and edited and was first published by the SUN in October 2019).