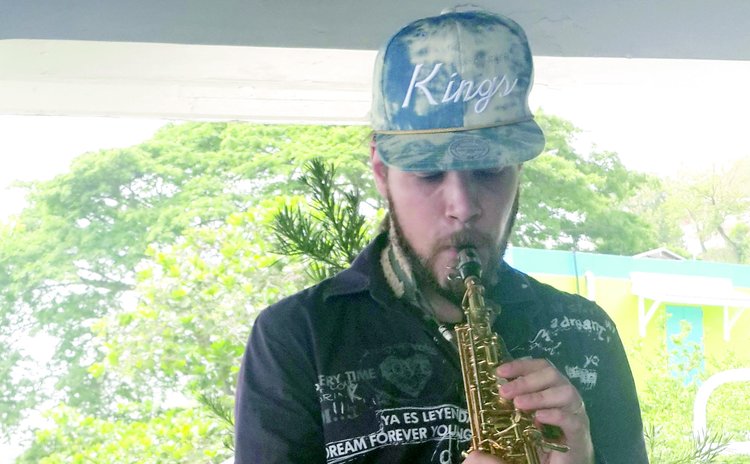 There's an all saxophone master residing right here in Dominica but very few speak of him. Well, maybe that's because Jazz music does not have a major following but I can tell you this guy is "bad". Jussi Paavola has done work with Michele Henderson, Gordon Henderson, Fitzroy Williams, Jerry Moulon, Cornel Phillip, Fred Nicholas, the Breve band as well as numerous solo performances with his alto, soprano, tenor sax and flute. Simply, I refer to the best saxophonist on island, Jussi Paavola.

I caught up with him earlier this month at the Evergreen Hotel where he serenaded guests having a Father's Day lunch. I asked him why he hasn't opened a music school or undertaken private tutorship; he answered that he is so involved in playing that he has difficulty in setting any schedule which would make him committed to a set programme. He's on call, as any doctor, with his music. He's a session guy-you want him and he is there.

If you have never heard Jussi play live then listen to his riffs on the Heritage album produced by Fitzroy Williams featuring King Dice, and you can get just a taste of his mastery. Were you at the Jazz & Creole Festival this year? Or did you attend the fringe event at the Evergreen Hotel where ace bassist Gomez and his Breve band featured with Jussi on sax, reed and flute…heavenly!

Jussi Paavola recently recorded his first major release featuring seven original tracks. The album was partly funded by the Saxetera Association following the prize of the same title that he won in a 2009 competition. The album was recorded in Montreuil France at Studio Sequenza and features Renard Gensane on trumpet, Donald Kontomanou on drums, Nicholas Moreaux on bass and Tony Paeleman on piano. Producers, saxophonist and flutist Jussi calls this release "Just do it and Finish".

Well this seem to sum up the life of Jussi who loves the naturalness of this country so much that he has made it his home. He is pretty unassuming and may not merit a second glance, just another Caucasian, except for his matted side burns; that is, until he picks up the saxophone.

The first track with his jazz Quintet, an edition for the Jazz purist, is titled "No Answers" features a busy bass line with continuous runs as his sax embellishes the notes round and round. Indeed "No answers".

Jazz fans should be familiar with "Take Five" but Jussi does "Five and Three" which introduces looping octaves of the bass in this second number before he improvises the title track "Do it and Finish" which starts with a military – 'call to order like' expression and then goes on to feature the full range of Jussi versatility on alto and tenor sax. "Traces from different places" is soothing and has a continuous haunting keyboard melody under the looping reeds, flutes and soprano saxes of Jussi as his fingers skillfully caresses and traces the notes. Then, "Loneliness and me" which starts with a solo on saxophone conveying what is obviously a sad story-hence the title.

It's always intriguing how instrumentalist come up with their fascinating titles. For this one, it was clear as sorrow was written all over; so time for reflection and a sip of wine. "Pionivalssi" commences with the reeds/flutes and lures into a false sense of relaxation before it awakes to a lively jazzy number. The final piece presents "Tina with two eyes" a mythical allusion of sorts brings an end to the seven piece repertoire.

While I am a recently converted Jazz lover thanks to the DFC, I must say I have a preference for Afro Caribbean or Latin Jazz; so if you're not a Jazz purist you might find difficulty in appreciating "Do it and Finish" and may just put it on and finish. However, if you appreciate the dexterous use of wind instruments, then spending a relaxing evening with the sound of the 'Jussi Paavola Paris Quintet' is ideal.