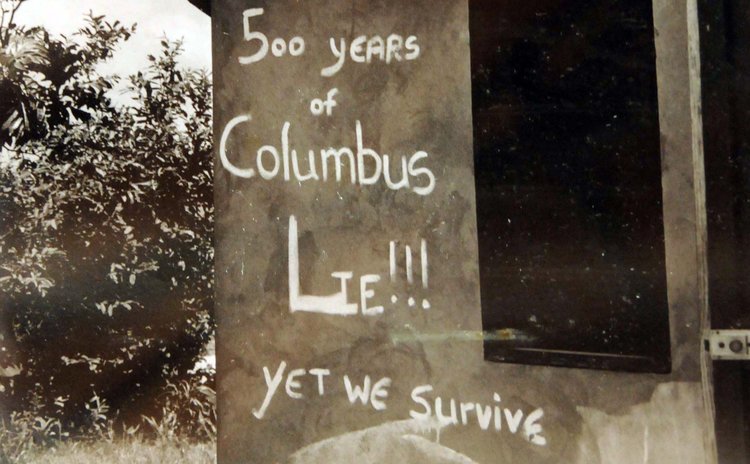 Photo of message on a wall at the Kalinago exhibition

Aborlor, zandoli, mabouya. Yes, they all form part of our daily vocabulary when we speak of various types of lizards. What about words like hurricane, our national bird the Sisserou, our wild life- manicou and agouti. Our fishermen speak of couliou and balaou, but we fail to realise that we owe these names to the Kalinago people.

They have been put on a "reserve" of sorts as so many indigenous people all over the world, particularly of Indian descent. They once ruled Waitukubuli, which Columbus with our help, has re-christened, re-colonised Dominica.

They named every village; Ittassi, Pagua, Toucari, Massacre,Tranto, Maho,Colihaut, Bataka and so many more. Most still remain with us today and so I am forced to reflect on the Kalinago people at this as we celebrate 36 years of independence.

Two weeks ago I went to the Old Mill Cultural Centre to view a mini exhibition organised by the Kalinago people. Prosper Paris, the president of the Territory's leading Cultural group, Karifuna, and senior cultural officer, Gregory Rabess, were responsible for putting this together.

On display were photographs and Kalinago artefacts depicting the life, past and present, of this resilient race. A people who protected the maroons, a people who befriended us, the Negroes, and fought alongside us, only to have the Negro's offspring call them derogatory names equivalent to the N- word that as black we never appreciated.

The great Carib Warner who is a legend, and champion chiefs as Jolly John, in whose honour a playing field is named; Jermandois Francis, Hilliary and Witney Frederick among many others and now Chief Williams now in his second stint at the helm, are all ceremonial position today and their once 'royal' status has been reduced to that of a village council chairman.

Kalinago country has produced many prominent individuals at Carnival Queen pageants, one of the latest being multiple queen Nikita Bruno; in sports perhaps most prominent the former West Indian cricketer Adam Sanford, brother of parliamentary contestant Claudius Sanford. A number of medical doctors, and even a few lawyers, have graduated over the past decade.

The above has definitely been a progressive expansion from the traditions of fishing and agriculture which has dominated their lives for centuries. Over the past two decade there has really been a thrust towards tourism fed by art, craft and culture. The Karifuna Cultural Group, for instance, has been the most travelled cultural group in the entire island.

One remembers the documentary featuring the use of the durable canoe of the Kalinago people facing the uncertainties and ravages of the high seas, using only the traditional oar travelling up the Caribbean Sea, moving along the Caribbean archipelago as far as Guyana and Belize, forging cultural bonds just as their ancestors did.

While the photographs on display at the exhibition seem to indicate the progress of the Kalinago people academically, socially and politically, many problems exist such as housing deprivation, unsanitary living conditions, lack of portable water, land still being held in common, the dilution of the race and the divisiveness of politics

Moreover, cultural invasion through music and Western lifestyles are major concerns for the Karifuna Cultural Group, who have primarily taken up the task of keeping some traditions afloat. Chief Williams' recent controversial appeal to keep the race pure, hence not encouraging intermarriage or 'coffee in their milk' of the Kalinagos, is not shared by all; one of his councillors distanced himself, citing discrimination in the modern scheme of things.

It is this same lack of unity of purpose and party 'politiking' which has greatly bruised the Territory and not necessarily sentimental or historical values attached to name changes from reserve to territory or Carib to Kalinago.

Education over time has lessened these vulnerabilities but politicians still prey on too many with empty promises and alcohol, giving some vindication to the white man's records of an over indulgence in Ouicou-cassava beer, the resulting drunken stupor and vulnerability. Then there are levels of incest which some sweep under the carpet saying it's a cultural thing.

Many of these are more or less of the past; the Kalinagos are progressive and highly educated persons who now find a niche in art and craft. They are, in fact, the most skilled crafts people and artisans on island. They entertain and exhibit their hospitality at their Karibana Aute totally debunking the western lie of being once fierce, warlike- cannibals.

Though some traditions as Sewenal and Teway Vaval are still staged seasonally, cultural activist, however are concerned that the culture is being lost. The youths have never really embraced modern accommodations as the Bouyon beat nor created a Bouyon band, but interestingly, have gone to the extent of experimenting with a rock band at one time.

Some cut their lovely long Kalinago hair, ironically, to fall victim to the "hair I buy' phenomena. The Cabet –styled housing architecture is rapidly changing and almost everyone is Christianised even if they are quick tell you " Columbus lie" about being the first to discover the region. He may have lied but his mission seems accomplished.