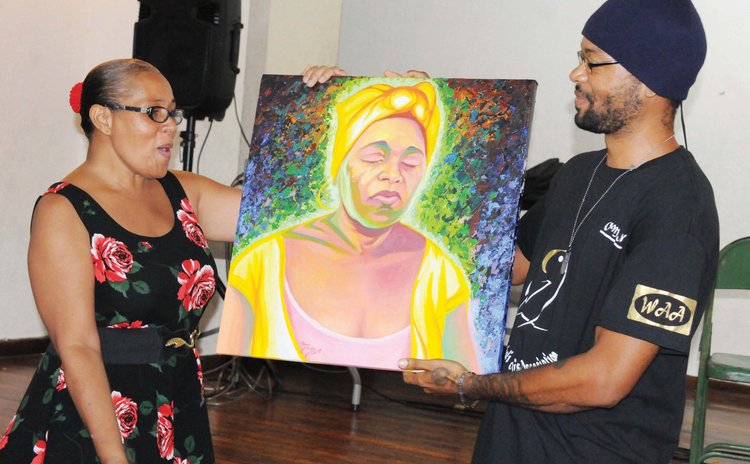 DOMFESTA painting exhibitions still demonstrate some of the best is to be found on island as I witnessed a couple weeks ago at the Old Mill Cultural Centre. I am one individual, if I could afford it, would have my home adorned with paintings depicting so many of the wonderful scenes that this country has to offer the artist and try to replicate on canvas via oil, acrylic, and even charcoal.

I began my tour of the painting exhibits via upstairs sometime during the week of the festival because I did not want to intrude on the practice of the scores of youth who were preparing for their graduation ceremony from the School of Arts Workshops carded for that same week. However, the music conducted by Aunty Pearle did provide a wonderful ambience as I looked over and tried to escape into the painters' minds who interpreted landscape and life with a kaleidoscope of paint, brush, color on canvas.

I was first greeted by the works of Aaron Hamilton, a resident artist. My attention was arrested by a wolf- like image fuming through his nostrils. It was titled 'Scorned' and not too far off hanging from the walls of the old mil was one entitled 'Kissed' probably forever in love with and an integral part of the vegetation which abounds. This is followed closely by the 'Sax-player' with notes and harmonies emanating from the saxophone of what seems to be a lively melody. Then its 'child-like creativity' an interpretation of the mind of a child with all the imaginary figures and concepts immersed in a sea of blue, a large piece by Lowell Royer looking at the world from a child's view-point.

A huge collector's item (48" x 32") simply entitled "Indian River" really portrays a piece of nature with the greenish water and huge trees and foliage captured in all its glory. It is an imposing piece of painting by Herbert Rosabel which depicts nature in all its shades, colors, tranquility and glory.

There are some smaller pieces (11"x11") using the medium of acrylic which focuses on central themes such as rebirth and nature; a coconut on the ground sprouting a shoot, a demonstration of its own resilience. Then one is greeted with a series titled "Strictly Local" as done by the painter Larocque, portraying some of the ornamental uses of the coconut.

Another collector's item, showed off by Dr. Lennox Honychurch, 'Castle Street' in 1979, reveals that not too much has changed except for the strewn galvanize and crushed vehicles from the fury of Hurricane David, I suppose- the artist is Herbert Rosabal. From 'Sensationalism' to 'Uncivilized' the names and styles present a wide range of concepts for the artist who signs as simply "Larocque"; abstract pieces as simple as an old oil drum on grass to that of a face painted white; yes, plaits which represent that of an Indian and dress of an African may present a deep abstract message for everyone who ventures to spend some time to unravel its mystery.

Many visual onlookers sometimes, through untrained eyes, just see color and ink but can't see beyond, hence what may sometimes, seem to be 'nonsense', or just incoherent brush strokes, actually may be months of toil with hidden details much like the revelation of the Bible or a well masked Calypso. This is the beauty of the art for the purist while the majority are merely visual and that's alright also- there's a place for everyone.

For instance in this exhibition Carol Sorhaindo in her 'survival series' captures flowers in all their resilience and bloom and then her preservation of our 'ancestral spirits' through the invocation of animals- perhaps.

Chase Lawrence's " Legacy" oil and acrylic painting, stands a massive 3'x4', and immortalizes our leaders from late E.O. Leblanc to Roosevelt Skerrit; something that could be worth a fortune two decades from now.

A multi- colored Sensay stands guard at the steps leading to the staircase ushering the visitor downstairs where there are a number of untitled pieces with traditional scenes of mother and child, river crossing, conch shell blowing, watermelons, Afro- Caribbean attire, thatched roof architecture reminiscent of village/ rural life.

Lowell Royer and Gareth par-ke Johnson's work are also proudly featured, some in abstract mode. The simple hummingbird in 'first kiss' of a flower ignites as the bird is captured in flight- nature's delight.

The painting can range from $300 for the 11" X 11" to $4000 for the much larger 3'-4' pieces but the old adage really rings true that these painting are worth a thousand words, so why not a thousand dollars, if they are well done as they are.