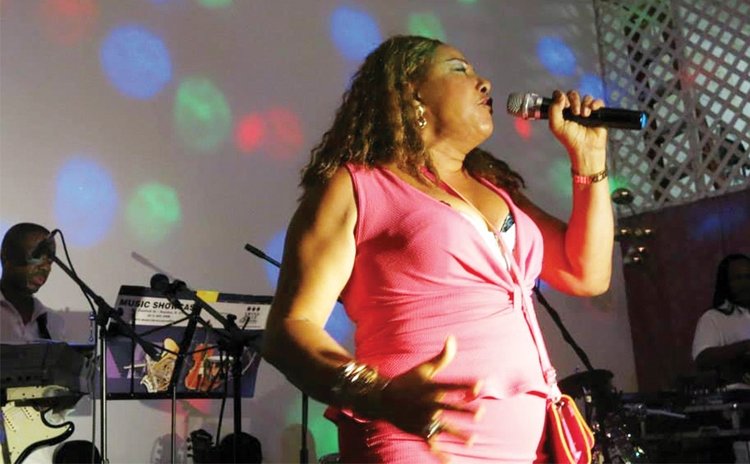 Put her on a stage. Throw her a 'mic'. Give her a band that can crank up the rhythm. And you've caught Janet Azzouz's attention.

Being on stage, doing live shows or working on new music in the studio: that's her passion. And it's been so for as long as she can remember, even when she won first prize for singing and acting on stage—as a three-year-old!

Janet, who performs under the stage name 'Angel' says her passion for music and stagecraft rises from deep within and is an important part of her life. Known for her sassy intensity on stage, the Dominican diva feels drawn to the spotlights.

She tried putting the stage on the back burner once, when she and her husband opened a vehicle rental business. But Janet thought about performing on stage all the time.

"I would be sitting at my desk and, while I was supposed to be doing my work, I was seeing myself on stage under coloured lights, with coloured hair…" she chuckles.

She's always loved music and it was always hard for her to curb her enthusiasm for the stage, especially when she was a teenager.

As a teen she spent a lot of time at the Belles Combo band house, watching longingly as the group practiced. "After I did my homework, that's where I would find myself…" she said.

At that time, the 'Cadence' genre was just emerging and she decided to write a song, 'Ca C'est La Vie'. Janet asked her stunned mother for permission to accompany the band to Martinique to record the song. Eventually, her mom agreed and Janet became the first female artiste to record a cadence song.

The song was a big hit, remaining at number one on the local Top-40 charts for five weeks, she recalls.

She started up a band about three years later, but it folded after about five years and Janet headed off to Canada where she continued to seek opportunities in music, holding a day job and singing at nights. In Canada, she developed a taste for rock music by artistes like Metallica and Bon Jovi. Janet says rock may be her favourite musical genre and she actually produced a 1990s rock album.

In her career, she has focused on creating Caribbean-style music, but the influence of rock on her songs is unmistakable, she says.

When Janet got married and returned to Dominica (by this time she was a Canadian citizen), she reluctantly took a break from music to develop the family business with her husband.

"Running the car rental was a good break for me. It had its own rewards and excitement and expanded my horizons . . . But I never did forget about music…" she explains.

When they closed the rental agency in 2010, Janet found that she had enough time to start writing music, singing and playing the piano again.

"The dream never left me, the desire never left…I feel this is what I have to do…every other thing I do is not a challenge for me…But music is not an easy thing…

Sometimes she practices four hours a day, five days a week or five hours a day three times a week.

Acutely aware that her songs will be played alongside top-class local and international artistes, Janet asserts, "Whatever I am doing, it has to be the best of what I can do…"

Janet writes most of her songs and, so far, she has produced four albums-- Back on Track, Celebrate, Heaven Tonight and Reloaded. Over the years, she has also performed singles that have been included on albums featuring other groups.

Janet, who is closely associated with Cotton Grove Studio, sang 'Dominica Jammin' on the 'Madras Riddim' compilation which featuring various artistes from the region. She also sang on the studio's 'LOUD Riddim', producing the single, 'You run Boy' which Janet said has been well received.

At the moment, she is working to release a new album with Cotton Grove Studio later this year. At least two songs from the album will be released as singles for Independence celebrations and 'You run Boy' will be incorporated into the album.

Janet wants local artistes to get more respect and airtime. She notes that one local radio station has a one-hour show mainly for foreign music, but there is nothing similar for local music.

"It had to take a DJ out of Canada…to come to Dominica to play the whole Madras Riddim on the road. When he put on the Madras Riddim, everyone started enjoying themselves…"she said, remembering Carnival 2014.

Speaking of disrespect for local artistes, Janet recalled the Dominica Festivals Committee (DFC)-- without consulting her-- named her in the lineup for the annual World Creole Music Festival cadence corner.

According to her, the DFC allocated 10 minutes for her to sing two songs dating from when she was 15 years old—for a $500 fee.

Janet says she asked for a 20-minute to half hour time slot to showcase her recent releases, but the DFC denied her request and she opted not to perform.

Not surprisingly, one of the singer's main concerns is the enforcement of copyright laws to safeguard artistes' intellectual rights.

She also wants more Government support for local artistes, especially to help them travel overseas, earn a decent income and get international exposure.

Janet thinks Government should to do a lot more to make music a lucrative profession and get rid of the misconception that musicians are people who have nothing to do.

She insists that local musicians cannot live off music alone right now and are forced to find alternative sources of income, so Government needs to take meaningful steps to boost the industry.

Since Dominica doesn't have the population size to sustain a profitable music industry, Janet believes Government should actively promote local artistes.
Meantime, she is doing all she can to elevate local music—her lifelong passion.