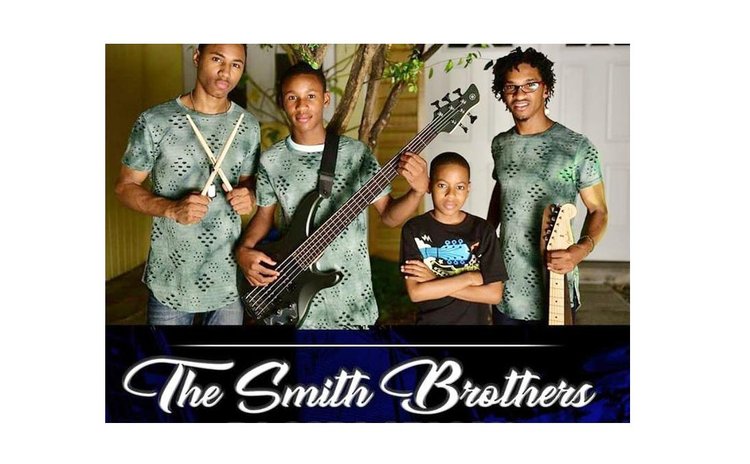 I had seen the two eldest brothers before perform together on the street corners, with the band Breve and of course which they were students at the St Mary's Academy, but never four at once. Recently they have announced themselves as the Smith Brothers. The name sounds like some firm or company, but the truth is they are a tightly woven quartet of extremely talented musicians. They were top graders at school and could have chosen any other career path but the brothers chose music, and what a choice.

Managed by their parents they have performed to small but appreciative audiences within the Roseau area. Now to have your parents unwavering support, particularly a mother, behind you, encouraging, defending, lobbying for you, is really a blessed experience.

Since the gospel groups of the Lloyds of the 80's, and the Christians who came later on, Dominica has never really experienced a group of siblings as one musical unit on stage. True this country can boast of the musical families of the Christian's, Letang's, Bellot's, Henderson's, just to name a few, but they have all pursued their musical aspirations as individuals and not necessarily as one unit.

Over the past three weeks attending patrons have been treated to top class performances at the Krazy Koconuts, in Reggae, Jazz and what the guys have dubbed their retro-night. The latter suggest the going back in time to feature the music of the 60's, 70's, 80's and the early 90's. These shows were staggered over three weekends at the same venue. The variety of genres is indicative of their versatility and dedication to rehearsals. Each of their shows is punctuated with some of the best local and youthful talent the country can offer in the persons of Jodie Johnson, Casim Birmingham, Lady S and Janae Jackson just to name a few.

The antics of the 11 year-old Micah and vocals abilities entrusted to him as the front man is just amazing and those old enough can't help recollecting the era of the famed Jackson Five. Well, yes Dominica has its own Fab Four as the Beatles were dubbed and it's the Smith Brothers. We would do well to not only take notice but support the guys via our attendance at shows, sponsorship and certainly from the ministry of culture.

We are speaking of guys who range from the ages of 11 to 24 playing music at the highest level in terms of their musicianship, choice and range of challenging repertoires which brings out their skill level on the instruments. This requires tremendous discipline and rehearsals as Tyson Johnson, ace music scholar who was instrumental in two of the brother's formative years. After the Jazz night he confessed to a spell bound audience about former student and leader of the brothers "he is the best."

Marxian "Max" Smith is developing quite a name for himself as one of Dominica's best guitarist at such a tender age. Yes, I already knew of his guitar exploits in the Breve band and the fact that he is in demand in neighboring French territories where he has been enjoying numerous contracted engagements and he recent earned an eight-month tour of duty with drummer brother Michaj on a cruise ship which took them as far as Spain. However, I was dumbfounded when I heard Marxian on the keys executing with such ease with popular Jazzy standards as "Fly Me to the Moon", "Summertime' and "At Last". During a scintillating performance by Janae Jackson he joined in vocal duet in her final number in Whitney Houston's "The Greatest Love" to deliver one of the greatest acts on a Dominican stage in recent times.

Carsim Birmingham, arguable the best teen vocalist on island, was equally brilliant as one of the guest performers as he 'Just called' in a number of Stevie Wonder Classic as " Overjoyed," and indeed the small appreciative audience was just that…overjoyed, as he dance and sang his way into hearts and minds.

The entire execution by the guest acts and the stars of the evening, the Smith Brothers was almost flawless on that "Jazz night". Marxian himself exuded not just skill on the keys and guitar but exhibited competence in the vocal department particularly in the Jimmy Hendricks composition "Ain't no Sunshine" which was his signature execution for the night. His professionalism, charisma and ease as a communicator and coordinator of activities on stage, did not go unnoticed. He was ably supported by brother 16 year old Mighan who was steady with his lines and runs all night on the bass guitar while bigger brother, the more experienced Michaj grooved it out on the drums.

I have always been fascinated at how easily Dominicans gravitate towards mediocrity by poor turnouts at classy shows of this nature. It is even more disturbing that not one musician from our leading dance bands was present. While many musicians are quite satisfied in playing a few minor and major chords, the Smith Brothers has challenged themselves to higher chords and musical embellishments of the jazz and classics with greater levels of difficulty in execution. When you are in the audience and ears are tuned in you know when it's executed properly- no training necessary. Probably we need to widen our range and music library, and I am sure you will appreciate the skill and by so doing it will help raise our own standards of appreciation in the nature island and demand more from our own aspiring artistes.