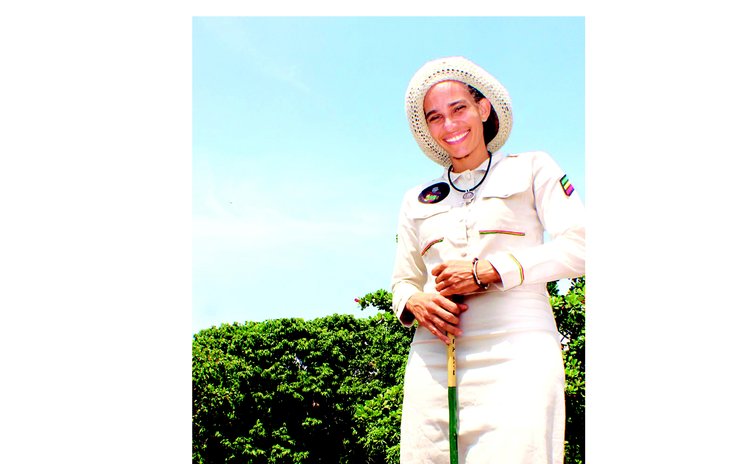 I am always so pleased when I don't have to rush to make reactionary comments on Facebook or other social media to sing praises to someone after that person passes. I prefer to do the praising during their life on earth. It was only in March 2015 that I wrote a piece in Spotlight featuring Harry Mo, Nelly Stharre, and Trevy Felix. This was what I wrote:

"Reggae Artist Nelly Stharre again handed me the latest CD of Dominican reggae artiste, Castle Bruce born Trevy Felix of the Boom Shaka Band another reggae veteran based in the US who haswell over 30 years in the business and is now receiving greatest recognition for his composition "Everyday "which features David Nolan and Karen Grant. "Everyday" is now getting rave reviews charts as a pop ballad. A departure from the root Reggae Trevy presents his solo release and refers to it as acoustic Reggae"

On reflection I have written a couple articles (on her first album "Awake" and her premier local concert held at the Arawak almost a decade ago) in praise of Nelly Stharre. She was an insightful songwriter and Reggae artiste of some pedigree, as good as any and better than many of the Jamaicans who we seem to 'worship'. Nelly produced three solid lyrically and vocally strong albums which, I dare say, exceeds the quality that very few females have achieved anywhere. Therefore, I want to express condolences to family, friends, the Nayabingi and Rastafari community and musicians for such a sad lost in what is an obviously tragic circumstance.

Nelly and Trevy chose Reggae as their preferred medium of expression as most Rastas do, even while most Dominicans hold fast to Cadance, Calypso or Bouyon as their preferred musical forms. Now with this artiste's demise it is important that our local promoters and the WCMF look closely at this trade imbalance that we are accruing with Jamaica in particular, with respect to music entertainment.

I think it would be reasonable to say that one of Dominica's biggest trade imbalances is with Japan judging for the scores of vehicles arriving on island every other week. What do we sell to this country or any other Asian country for that matter? Similarly we can ask how many Dominicans are afforded the opportunity to engage themselves in national events such as Reggae Sun Splash in Jamaica or other shows of national significance in that country. Yes I have heard talk of Nasio, Colton T, and Nelly herself doing some private stints in Jamaica and Swinging Stars will boast of having played their once when most people reading this article were not born!

Jamaica has Carnival by the way, and has produced one of the best Soca/ Calypso bands ever- Byron Lee and the Dragonaires. Today with the numerous collaborations with Trinidadians (Destra, Machel, Bunji and even Bajan Allison Hinds) they now are a regular part of the Jamaican musical diet at various shows in that country. This is all good for the gross national product of TNT and Barbados but what does Dominica get? I counted over 50 Jamaican artistes and bands who have performed for significant sums of money in Dominica and yet we cannot get that country to reciprocate.

What is it, aren't our artistes good enough? What is even of greater concern is that most organizers will give Nasio or Nelly problems to be paid a fee equivalent to their international status but will feel comfortable in having say, Cecile perform for top money at the WCMF even though her performance to say the least, was uninspiring. Devine Songz or Nelly herself could easily be a better replacement artist, but alas too late!

Wasn't Trevy or Nelly Stharre (and don't even mention Nasio) of a superior quality? If it's a marketing issue well I take my hat off to Jamaica, they know how to internationalize their artistes. But this is also part of the mandate of DFC and small local show promoters to get Aima, Colton T, and Dr.Silk to be exposed on a world stage since Chronixx has nothing really over these local acts except quality music videos, management, promotions on the influential "On Stage" programme and financial and institutional backing.

Let's look at Calypso and see how Ann-Marie Clarke has so packaged and sold local Calypso with such zeal and skill that shows can be sold out in New York and yet those who never praised her seek to vilify her for one incident?

I also advance that a seven time Calypso King, deserves his own show- one hour and a half on the main stage at the WCMF. We have to stop these one-and-a-half-album stars and stop sending out money every year to Jamaica and Trinidad when our artistes are not afforded the opportunity to be musically engaged in these countries. I can assure you it not just chicken and cars; music, over decades has created an alarming balance of payment deficit which our government and those involved in the music industry must consider and move towards rectifying.