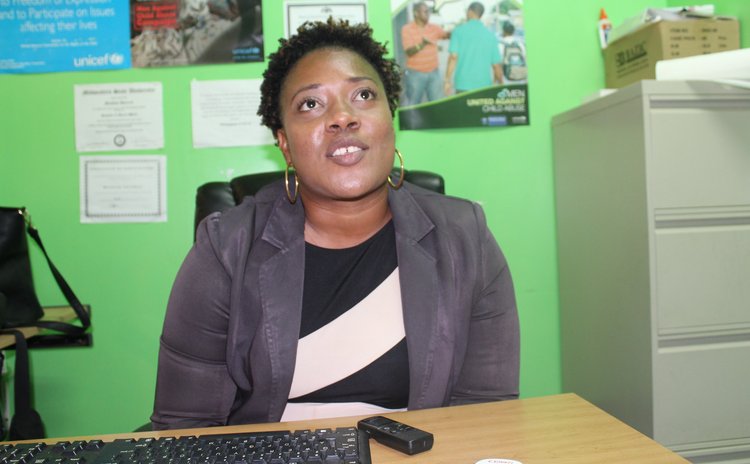 Mandisa Ducreay at her office

As she gets ready for the Calypso Quarter Finals, Mandisa Ducreay says she's ready to climb the mountain ahead, the Calypso Finals.

Using the Calypso name "Mandisa", Ducreay is one of the newcomers to the Quarter Finals carded for Saturday at the Newtown Savanah. She sings about the social ills she has encountered as a welfare officer.

"I am from the community of Soufriere/Gillion and I am a social welfare worker attached to the Welfare Department. I have a passion for social work and working with young people. I need to also say that I have always loved singing from since high school days," she told the Sun.

She continued: "I sang in high school for my five years and I was the soloist for the choir and I participated in plays and festivals. Even after high school I continued to sing but on a smaller scale. I also sang with John Gremnar in various cafes on the island."

According to Ducreay, her Calypso journey didn't start in Dominica; it began while she was at the Mid-Western State University in Wichita Falls, Texas (USA) where there is a very strong Caribbean student's organization; it organized a CaribFest, a sort of a carnival.

"Part of that carnival is a Calypso show. There was a young woman who participated but dropped out at the last minute and I was asked to replace her, in 2003. I competed but didn't do well; in fact I forgot my song. The second year I won and the third year I was on my way out and didn't take it seriously and placed second," Ducreay said.

Ducreay said she never thought that she would have liked the Calypso art form until she entered university.

"I got to love Calypso," she said smiling. "When I got back home I still loved singing but time… I became a mom and, you know. But I entered the Elimination of the Calypso competition in Dominica in 2016 but didn't make it. I also took part in the women's Calypso event, so here I am now back in 2018 and into the Quarters and hoping to go all the way," she said "I am very happy to be part of the art form. It's a platform for me to express myself in all ways. It's fun and empowering. I love the energy from the crowd and will do it for a while, not for money, just fun."

She wrote the song entitled "Suiteweh" in collaboration with Haxey.

"That song can be applied internationally. Money controls the entire system and my song speaks about that. It develops into criminal activity and all that is done in song. It also has a little vulgarity and I am happy for that since it allows me to express myself fully in Creole," she said.