Nobody owns the Rainbow: A review 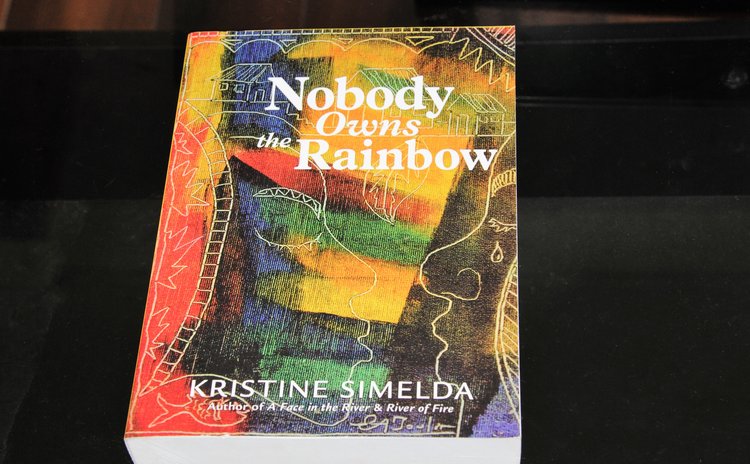 Cover of book: Nobody Owns the Rainbow
By Ian Jackson

I have been absorbed more than ever into reading since Hurricane Maria and now more so when I put my hands on a local must-read, the latest publication from Kristine Simelda appropriately titled "Nobody owns the Rainbow."

A novel born out of Kristine's own experiences (as a resident in Dominica for over two decades) and amplified to reflect environmental issues; a battle to eventually save the pristine environs of Morne Plaisance and thwart the greed of would-be investors, invaders who concocted with local administrators in pursuit of their get-rich plans.

Native protagonists Johnny, a Rasta and farmer falls madly in love with Irene an environmentalist brought in to assess the feasibility of an abattoir project. This unlikely love union of farmer and scientist finds common ground in the natural simplicities that this rainbow island has to offer; lush vegetation, real food, rivers, loving, warm, ganja smoking Rasta men and a strong Kalinago heritage.

Johnny's appetite for a 'high' is fed by his cousin who eventually lures him into the sale of his father's sacred ground and sanctuary for so many Rasta brethren. Now he has sold his birth right even without the blessings of his mother Alma, of Kalinago decent.

However, the million dollar cheque could not be cashed as money laundering issues and financial improprieties rears its ugly head. So Johnny's troubles begin to mount. He seeks consolation in the deceptive cousin, Sanford's 'Special Reserve,' a cocaine concoction to pacify his mounting money problems. He tries to find solace between the legs of the Spanish senorita, Carlotta. This is short-lived as he finds out that the purchase of the property was not merely for constructing an abattoir, a technical word for 'slaughtering' animals but was just a smokescreen for a biological genetic modification of pigs-enviropigs, which would have catastrophic effect on the environment and the way of life of the people, his people.

The mad scientist and pig-loving Frankenswine and Chinese wife Won Ling had formed a scheming partnership with Sanford -New Dawn- and before it dawned on the villagers of Savanne and the neighboring Kalinagos what was the true motive of the so-called developers, the pristine environment was being ravaged and raped before their very eyes.

With the help of Minister Blanchard and other administrators who obviously were getting kickbacks, the environmental impact study that Irene Rahman was brought to conduct was just a deception and the project would go alone any way despite the obvious displacement of the people and way of life and the obvious destruction of Morne Plaisance.

Kristine Simelda in her novel presents a contradiction of nature, honesty and simplicity with greed, ruthlessness and oppression by Chinese and, yes, white invaders posing as developers. A simple farming, cutlass-welding, ganja, Rasta-smoking, back-to-Africa, community finds itself having to confront the complexities of a multi- biotech corporation with their money, machinery and their poisonous crack cocaine to tranquilize the minds.

Johnny struggles with the written language belies his intelligence when he converses. For him the author raises the over simplicities that would suggest pig genes may actually be jeans worn by pigs. Maybe as in Alick Lazare's "Kalinago Warriors" the author is making a statement to colonizers-invaders, that in spite of how simple the natives are they can hold their own. Or maybe this is done just to make him seem 'irie'; worthy of the Trinidad intellect, Irene.

Luckily Johnny is awoken from his stupor, thanks to Irene whom he rechristens ' Irie. Though she herself struggles with intimacy haunted by her past, she does not see him as just an uneducated Rasta man but one who is strong, honest and fought his way back from drugs to stand with his mother Alma, the natives and the Kalinago Braves who envies the invaders actions as on Morne Plaisance (which does not seem to be pleasant anymore) as sacrilege, an invasion of the burial ground of hundreds of their ancestors.

Now Johnny is armed with his Father's gun, and a determination to defend his turf, his family and a future on the mountain with Irene. He stands poised with the Kalinago, Rasta brethren and even nature herself, in defiance of the land and people, cause "Nobody owns the Rainbow".

The writer's language is rich when she vividly paints a love scene between Johnny and Irene. It can also be very direct as her characters are not afraid of resorting to the "f" word when tempers flare. Kristine can also be subtle and symbolic as she describes Solomon's exodus from this life to the next, when his home was set ablaze. She is obviously not divorced from the subject and so allows the characters to speak for her, shape opinions and convictions in favor of preservation and a natural way of living.

Commentaries on government ministers , functionaries at Customs and banking institutions, Spanish and prostitution, pothole and infrastructure, Columbus and Caribs, culture, religion and superstition, the Dread Act, Newtown, the Public Library, characters as Sanford, Esprit, Blanchard, Edison, Seraphine all are indicative of the Nature Island- Dominica setting in the story being conveyed by the writer. Throughout a tale of love, battle against drug and sexual addiction there, but even greater a more potent message: one which goes way beyond slogan "Protect the environment."

The astute reader will encounter a few typographical or layout errors, but it takes nothing away from the spicy storyline. I give it a 7.5 out of 10 rating. It's available at Jays Book Store.