Once on this island 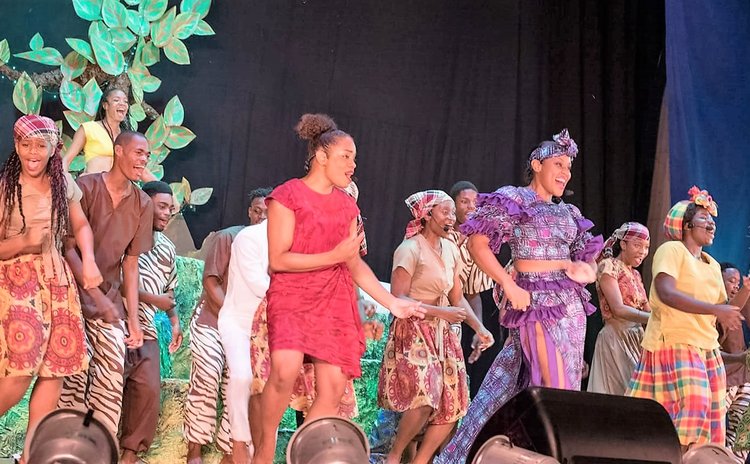 Never before had expectations preceded a theatrical production like this one first staged two decades ago; it did not disappoint. The second staging of Lynn Ahren and Stephen Flaherty musical had its first local staging 20 years ago and was unearthed once more and was staged over the weekend.

The cast of Michele Henderson, Janae Jackson, Tasha Peltier, Webster Marie ,Steve James, Marie Affana Pascale, Kareem Bertrand, Simeon Joseph Danielle Wilson, it could be argued, was as esteemed as the 1997 cast which at the time consisted of Edith Bellot Alleyne, Claudia Henderson, and the late Amorette James, Roosevelt Richards and Gabriel Dalrymple, just to name a few. However, this staging was much more classy and professional mainly due to the choreography of the renowned Sade Bully. Additionally, the improved sound quality especially the amplification, attributed to 'Jenner Sound', and the trained and experienced technical crew which accompanied on lights, wardrobe, set and costume design, this time around was sufficient for me to rate this as the best play staged at the Arawak ever.

Never before has the stage been graced with such a diversity of energy, vocal and acting ability as was unveiled last weekend. Jesus Christ Super-Star staged in the 70's, was the only possibly rival to this!

Sell out audiences came to witness a combination of "Aunty" Pearle's Sisserou Singers and the Alwin Bully theatrical brand in this love thriller of mythical dimensions where gods, princes and peasants meet and love overcomes sorcery and powers of darkness and death.

Steve James, the only actor who was part of the 1997 cast did not seem to be one year older as his vocals and gait represented to full effect Papa Ge, demon of death, the essence of evil and the supernatural.

Ti Moune (Michele Henderson), the forest child who was found in a tree and was cared for and nourished by adopted parents Mama Euralie (Janae Jackson) and Ton Ton Julien(Simeon Joseph) after a flood commissioned by Agwe, god of water.

The artistic director, Doctor Alwin himself, found a way to present both characters on stage at the same time as Ti Moune and Little Ti Moune- Beata Vidal, going back to the future and then the present, while the story of love and betrayal unfolded.

Rain commissioned by the gods fell and not only did a fateful vehicular collision brought about the death of 'Daniel' but through this medium the two worlds also collided. Daniel, played by Kareem Bertrand, a man of substance who represented the wealth of the two worlds on this divisive island of the haves and the have nots, found his way into the heart of a commoner as Ti Moune against the advice of her loving parents who reluctantly allowed her to pursue her heart with the blessings of the gods. After all she was the one who nursed him back to full health; this was one of the most heart wrenching scenes of the production though their wonderful chemistry and harmonization were not enough to keep Ti Moune from pursuing love as fate and the gods would have it.

Ti Moune's dark skin and village-natural simplistic way of life governed by the gods, contrasted with the finesse and sophistication of the French who once colonized the island and who were driven out by the Haitian natives. Guest performer Momo Sano, a world renowned professional dancer and choreographer, himself joined his counterpart Sade in an exquisite duet to symbolize the oneness of bodies….that was then!

The romance was short lived.

Hearts fell in the Arawak House of Culture as Ti Moune's pain and obvious tears transcended in song; after all she had once nursed him back to health and traded her life to the demon of death and now this betrayal, and his eyes fell on Andrea.

The final nail was driven when she was given the indignity of a coin as a tradeoff for her love; Judas' thirty pieces of silver- Papa Ge had indeed crucified her, without touching her body and the audience died with her. She could no longer enter the other side-Trevor Samuel, the gate keeper who played Armand, made sure she was kept out for good.

The effect and precision of light and sound, the costume and choreography, the magical transformation of Little Ti Moune into an adult, the dance rituals in summoning rain, death or injecting life into the once lifeless body of 'Daniel' all contributed and evoked the desired reaction.

Ti Moune's grief transformed her back to the tree from whence she came, this time not lonely and afraid but triumphant as one of the gods looking down from her esteemed, elevated position.

Tasha, Janae, Steve, Kareem, Marie, Webster quite apart from main act Michele, were all entrusted with solos in addition to musical dialogue, the story line, which catapulted the story of two worlds. When it was all over two hours later patrons were of the view that the title represented well what they had only once in their lifetime experienced on stage in Dominica "Once on this island!"- Brilliant!