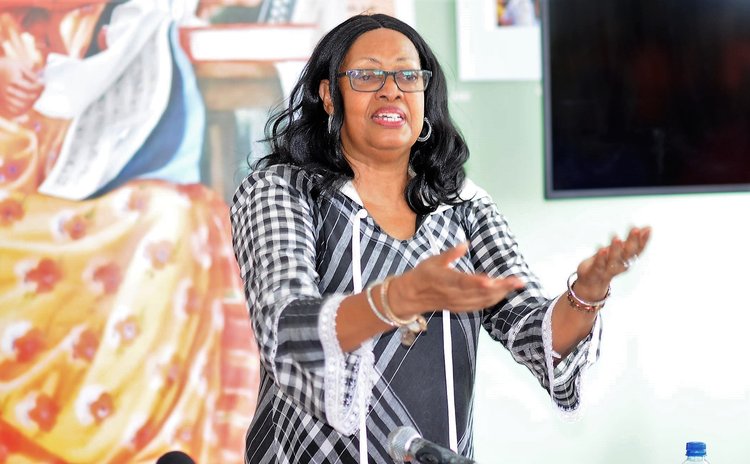 OPHELIA burst on the music scene in 1979 with her seminal hit "AIE Dominique" like a rocket from NASA. Though she had always been singing since she was a small child in Curacao where she was born, it was after she married McCarthy Marie that her career as a singer began and moved from amateur to a professional level. In fact "AIE Dominique" was written for the Creole song contest of 1975 which she handsomely won. Believe it or not but the beat was not a four to the bar cadence beat, but a 3/4 waltz time! It was Gordon Henderson of Exile One who suggested just before the recording in Paris in January of 1978, that the song should be done in 4/4 time to a cadence beat.

When the long playing record was released in July of 1978 AIE Dominique was immediately a hit in Guadeloupe and Martinique although this was towards the end of the dominance of Dominican music in the French West Indies. Gordon Henderson had just left Exile One, and although the rest of the guys struggled on as Exile House for a year or so without Gordon at the front they were a spent force. Grammacks kept on playing as a group but they too were showing signs of fatigue while the lesser known bands had already fallen by the wayside. Throughout the eighties OPHELIA was not only the musical voice of Dominica in the Creole world, but she also became the face of Dominica and was regularly in demand by the business and political classes in the French West Indies for different commercial and political events. When OPHELIA made an appearance at a record shop in Fort-de-France in March of 1979 to autograph the album for fans a veritable riot broke out which necessitated the intervention of the gendarmes to clear the street of Rue Lamartine!!

In the Caribbean of 1978 music was strictly a male affair. Dominica and the French West Indies were no different. In fact some record distributors in the French West Indies refused initially to carry OPHELIA's record on the grounds that the public would not buy records by a woman singer! However OPHELIA's reception by the public was nothing short of ecstatic; you could say that she was the prophet long awaited by a suffering population, particularly the females. The record eventually sold more than 100,000 copies and is still selling in CD format. It was not long before requests for live performances began pouring in and OPHELIA's first concert in Guadeloupe took place in February of 1979. The Centre Des Arts et de la Culture was at the time the most sophisticated concert hall in the Eastern Caribbean and this was the first concert to be held there featuring Caribbean popular music. The hall was packed to capacity; the backing band was the legendary Vikings de la Guadeloupe featuring on bass Pierre-Edouard Decimus, who would later found the legendary Zouk band KASSAV.

Would OPHELIA deliver live what she promised on vinyl? With guidance from Gordon Henderson a well-rounded concert programme was put together which included a couple well known international standards. From the first note of "Maman Pa Pleure" OPHELIA connected with the audience and she was on her way. Not only was a star born that night, but the rise of female singers in the Creole music world had begun.

Requests for more performances followed and les Vikings, for all practical purposes, became OPHELIA's backing band eventually playing hundreds of concerts in Guadeloupe, Martinique, French Guyana and France. OPHELIA's performances helped tremendously to shift Creole music towards concerts and less of the marathon dance sessions which was the popular form of live music presentations in the French West Indies. OPHELIA had many concerts where she played to crowds in excess of 10,000 persons like the Fete de Justice Concert in Lamentin for the communist party of Martinique. Other notable performances include the eight sold out concerts at Theatre de la Renaissance in Paris from which a live record was released. OPHELIA has performed in every island in the Caribbean except Cuba. She has performed in Jamaica, Trinidad, Barbados, Grenada, St. Lucia, St. Kitts, St. Thomas, Tortola, Montserrat, Tobago, and Antigua. In 2015 at Carifesta in Haiti OPHELIA was the only performer from Dominica. She played to backing tracks, but even so the media in Haiti was completely taken with OPHELIA's performances and she received more media exposure for Dominica than other countries with contingents of twenty or more performers. The Caricom country in which OPHELIA has performed the most is Trinidad and Tobago including two headline performances at the San Fernando Jazz Festival which forces us to ask why she has never performed at the Jazz 'N Creole Festival in its ten years of existence.

OPHELIA has won many awards - The Maracas D'or in Paris, the Sisserou medal of honour and the Caribbean Cultural Icon award from the CARIFESTA committee - the only person to be awarded in the musical field. Of all the awards she has received OPHELIA cherishes her Lifetime Achievement Award received from Sacem in Martinique the most. She is also very appreciative of her first one, the Maracas d'Or in Paris in 1981, as well as the Golden Drum Award in Dominica in 1986, and the Sisserou Award in 1989.

OPHELIA has thus far recorded 16 albums which have all proved successful to varying degrees but it is her live performances that have solidified her as a Caribbean star. Who can forget the spell binding performance OPHELIA delivered with the Pom Kannel Dancers from Martinique and Daryl Bobb at the 2016 WCMF. A truly exemplary performance of class and professionalism.

This year, 2019 marks OPHELIA's 40th year in the music business and she is starting off a year of celebratory performances with a show on Mothers' Day Weekend on the 11th of May at the Strip at Loubiere. Besides having many of the musicians who have accompanied her on her many tours like Fred Nicholas and Andrew "Bird" Bellony the President of the Regional Council of Guadeloupe, Arry Chalus is expected to be her special guest.