Our flag has hidden much too long 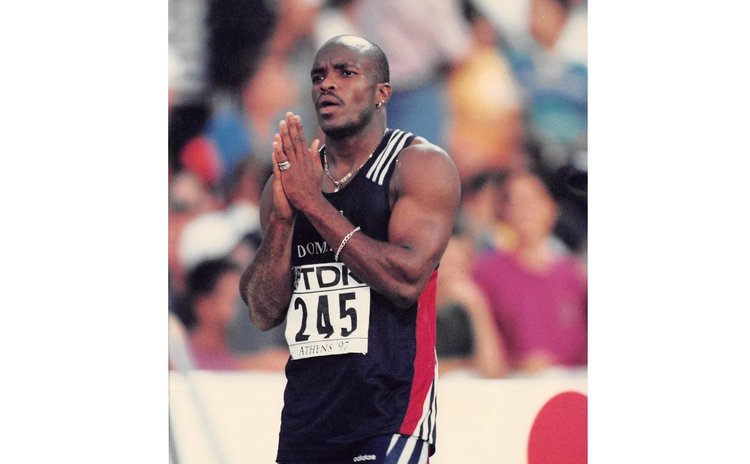 When, shortly after admission to the Olympic movement, Dominica for the first time took part in the 1996 Summer Games at Atlanta, U.S.A, the small nation of ours held up hopes that it could be dynamic in moving itself forward on the international sporting map. We went to Atlanta hopeful of not being altogether outright illegitimate outsiders or no hopers. In swimming we were simply using a big toe to test the waters. But in athletics we had already demonstrated that Jerome Romain was medal material and Dawn Williams (now Sewer), Hermine Joseph along with Cedric Harris and Stephen Agar posed credible threat of breaking into the positive limelight.

After gaining sports scholarships to U.S. colleges Romain in 1995 achieved world ratings by securing the silver medal at the Pan American Games in Argentina and the bronze medal at Stockholm World Games in the men's triple jump concurrent with notable distances in the long jump. That he did not do himself justice at Atlanta was more likely due to his having entered the Olympic Games there under impediment of a troublesome knee injury. He, however, made it to the finals in both the triple and long jumps.

It was a magnificent, though losing effort; on the part of Dawn Williams that only a couple of hundredths of a second denied her advancing from the semi finals in the women's 800 metres. The irony was that she only lost out to another contestant emerging from a separate heat! I saw the Games and I had absolutely no doubt as to Dawn's exceptional fighting instincts, having seen how she had managed to make ground while passing around another athlete lying on the track after a fall via collision with a third runner. This occurred in the closing stages of a memorable race.

Very much time has elapsed – twenty-one years – since the Atlanta Games. We have not made up ground in the international sporting arenas. Nothing like, for instance, Grenada headlining with Kirani James who made the Caribbean proud by snatching the gold at the London Olympics of 2012. Nor have we broken the surface, as has St. Kitts, through the perennial Kim Collins always looming large in the short sprints. It should not be forgotten that St. Kitts was admitted to the Olympic movement the same time as ourselves.

Track and field showcases individual disciplines of stellar merit which leap frog times and distances on a regular basis. Runners become increasingly faster and jumpers and throwers keep stretching the tape relentlessly forward. For evidence of this one may consider that the men's javelin was modified in weight some years ago to minimize the menace of it being thrown into the crowd!

My hopes for Dominica have lived under a cherished dream of our national teams achieving Games qualification in, say, football, basketball, volleyball among the team sports. It may seem to many like breaching the gap between us and the moon. Yet, with women's football having in the last twenty years become a very real thing, the playing field here is still very much a level one. From what I have seen, admittedly mostly on television, our girls are gifted with the basic ability to pull up to the standard of play of Trinidad and Jamaica in the Caribbean, then turn attention to the U.S.A. and other world luminaries. It is very much a matter of adopting the right vision and developing the right attitude to mastering the fundamentals of the sport before climbing the ladder one rung at a time.

With all this in mind, it is never going to be a relying on wishing and hoping. Nothing plausible can be achieved without a concrete vision and a well fortified collective stance for pursuing the full extent of our laudable goals. No less than five Olympic Games have come and gone since Atlanta 1996, and it is difficult to assume we have begun to scratch the surface in search of generating sporting success. The recent tumultuous atmosphere at the annual general meeting of the Dominica Olympic Committee should not be seen only as an upwelling discontent with alleged irregularities impediment to progress hinging on transparency issues – the heat of which, as well as attendant smoke being suggestive of smoldering fires.

Any attempt at suggesting the media may be selectively admitted to cover the major discourse etc of the Dominica Olympic Committee is at total variance with the Olympic ideal and moreso its actual derivations. Never should it be lost sight of that the International Olympic Committee came into being almost singlehandedly through a newspaper journalist, its founder Baron Pierre de Coubatin. This great visionary, as the movement's first Secretary General and later its President, employed his consummate literary skills and excellent powers of advocacy to craft the international gem that has stood the test of over one hundred years and held fast beyond two World Wars.

When it is actually countenanced that the Table Tennis Association be excluded from voting at the coming elections to install a new executive board for the D.O.C. there can be little doubt as to an effort at limiting inclusiveness – bearing in mind that the discontinuing of an annual grant to all member associations can easily be construed as contributing to the Table Tennis Association's default in payment of fees to its parent body the International Table Tennis Federation, it is indeed, unconscionable that it should be seriously entertained that the local body be barred from the forthcoming elections.

All of this smells of an odour made even more putrid by an attempt to conjure up what is seriously being considered an Athletes' Commission which to all intents and purposes is handpicked to commandeer its voting direction. The introducing of an Athletes' Commission just when elections are due is not one the majority of national sports associations will tolerate, and rightly so. There is no question of denying the usefulness of such a commission, but its bearing will not stand to be diminished if it is introduced after the coming elections take place – giving a better face to justice appearing to be done.

In the wake of the coming elections it will suit this country most if the sister associations get together to inculcate a means of seeing how best our sporting standards might be elevated with the prime purpose of Dominica's flag becoming lifted higher at forthcoming Olympic Games.