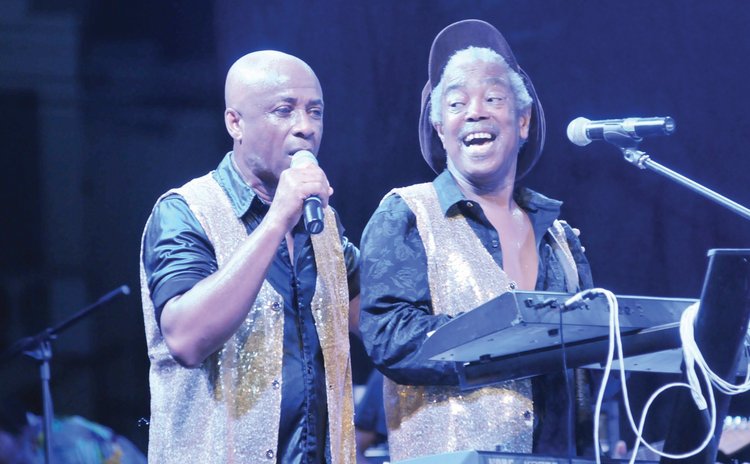 Well, many of us won't see it again, this once-in-a- lifetime event where three icons grace a Dominica stage each observing half a century of music. In fact it won't happen again and so those who were not present missed out on the Papas of Creole-Gordon, Chubby and Harley.

At the show, things started rather belatedly as one of the Exile musicians seems to have been in Exile for about an hour. But then the wait was well worth it as the three elder statesmen of the original band vocalist and songwriter Gordon Henderson, Keyboardist and arranger/ musical director Fitzroy Williams and Bassist Vivian Wallace stormed the stage with hit, after hit, after hit.

Time froze as a seemingly a youthful Gordon charmed his way into the hearts of the hundreds who braved the inclement weather. Surely this time they did not 'Twaville pou a yen'. Sty Larocque- drummer extraordinaire, took over from 'Froggy' Joseph and as they say, it was more fire as he warmed up with a fascinating drumming display. Hired saxophonist Jusi, a duo of horn players to compliment, guitarist Jerry Moulon and Dominica's best lead Keyboardist Cornel Phillip all added their excellence to the musical genius of the original Exile members.

When their set was over, scores ran back stage to compliment or take photos with the guys who started it all. They all recognized the stellar, once-in-a-lifetime moment and just wanted to immortalize or to document that they were there; with Gordon, with Vivian and with Fitzroy or just to rub shoulders and show appreciation and support like other legends Fred Nicholas and Andrew "Bird" Bellony.

A rather lengthy break followed to change over to the Kings of Cadence, the Midnight Grovers while DJ Mr Mixx kept tings warm. However, before the 'Coco sec' man, Chubby, made his appearance, he was preceded by another legend this time of Belles Combo fame-Cletus 'Harley' Joseph. He immediately sent the audience in frenzy with 'Simplify Yourself', 'Pawabol' and 'Long Tongue', citing that while he was backed up by the Grovers, he was the 'woover', whatever that means. Harley, the wonderfully gifted lyricist, injected the Belles brand of Cadence with his energetic antics, strong and unique voice.

What a way to bring on the King, the roots Cadence king who is arguably the most beloved of all Cadence icons, one who never left Dominica's shores and touches hearts and minds of the poor and down-trodden. Arden Soundz engineering of Chubby and the Grovers, represented the cleanest and most balanced mix for the night.

I was particularly impressed with the tone of the bassist and brother on keyboards as they played alongside the one and only Marcel 'Coe' Mark. It was nostalgic feeling the depth in the bass, listening to the precision and tones of the youthful keyboardist and the execution of drum patterns of the late Henry Bellot. MC Webb had no choice but to accede to the calls for an encore at approximately 2.15 am, Father's Day.

The Original Bouyon Pioneers had a hard act to follow as the diehard Cadence demographic had gotten what they came for, and left for home. Nonetheless, Wackers, Cornel, Smokey, Keith and Rah Peters responded well with their own hits: "Balance Batty", "Conch-Shell" and a plethora of others and fans remained glued.

Having witnessed the musicianship and dexterity, the harmonization and vocal quality, lyrics and precision in execution that night, someone who should know better, told me that our music had evolved. MC Webb echoed my sentiments "where are the youthful musicians, to witness the professionalism that was unfolding before our eyes?"

Leaving the Stadium's Forecourt venue, I again questioned myself: is evolution not supposed to be progressive; as in the evolutionist theory of apes evolving to man? If in every musical department- vocals, music, dexterity, professionalism, global appeal, was better in the 70's, I reasoned, can we truly say the music has evolved, or dissolved? This I leave for you to ponder.

I declare that this Papa Creole event as the greatest, 'strictly local' musical production in recent memory.