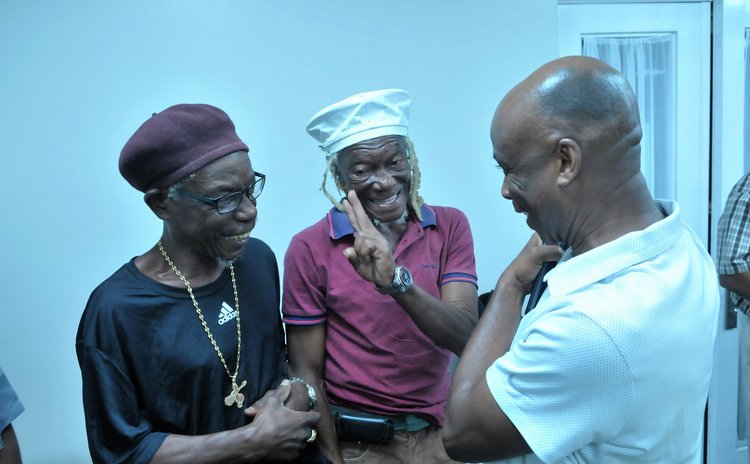 There is no other artiste that has impacted the common man more than Phillip Cubby Mark of Grand Bay. I would extend this by saying that the three greatest lyricists to ever come from the English-speaking Caribbean are Bob Marley, Sparrow and Chubby of Dominica from the Francophone world.

I totally respect Gordon Henderson as a lyricist and singer of his own material or the pen of Pat Aaron or the stage performances of the late Jeff Joseph but Chubby stands alone for longevity; the most prolific composer from the Calypso classic "Ma doe suck" it to me to his Cadence genius dealing with a range of themes about ingratitude, immorality, religion, oppression and the law, the economy, international topics such as a tribute to Nelson Mandela and in an instructive and satirical manner about the herb, Rasta, police brutality, ungratefulness, one's hair, milk, honey, Anita and sexual immorality, a return to one's roots, rum and ganja, shoe heels and even a comical twist on the human anatomy 'gro tay tay' or 'Freedom street Lagoon'. What diversity in political and social commentary despite formal education limitations?

Frankly, Chubby, is the equivalent of Bob Marley in the OECS and I do not hesitate in making this bold statement. There is no subject, be it repatriation to standing up for what is right or issues of love that has not been dealt with and over a longer period than Bob. The latter died at 36 Chubby while has been performing and producing for over half a century-50 years- none stop.

Apart from his plethora of Cadence hits he has composed dozens of wonderful Reggae numbers that have remained gems for decades.

There are a few reasons why Chubby does not get the recognition he deserves or does not enjoy the financial equivalence of his immense talent with words; many still struggle with the Creole language, he was never blessed with a Chris Blackwell as Marley was to invest in his unbridled talent and elevate him to fame.

Though many may argue that he has contributed to his own stagnation much the same as was attributed to Jamaica's Peter Tosh; uncompromising with his Rasta beliefs and at times difficult and more reclusive than Nasio. But the Chubby I have come to know today has matured after just about three scores and ten, and is a very affable individual who has long elevated from the 'Dread' experimentation of the 70s and early 80s, into a devout Rasta man who recognizes that music is also business.

Just as Bob could not do without the musical genius of Aston Barrett on Bass or music arranger keyboardist Lindo Wiry Downy, Chubby's music is driven by the infectious rhythm of his brother Marcel Coe Mark on guitar and keys. He too is a genius of sorts as it is almost inconceivable how a self-taught musician could come up with such melodies and unique indelible finger styled arrangement in the signature 3 to 4 chord patterns of Midnite Groovers roots Cadence.

Chubby himself used to play live bass or drums and on most of Midnite Groovers recordings it was just he and his brother at Debs studios in Guadeloupe, sometimes with native Pierre Labourne, Saxophonist extraordinaire a session musician who also has worked with Exile One and many groups from all over the Francophone world. Chubby can recall those days when he just was satisfied getting the message out while the owner of the said studios lined their pockets only providing the brothers with a few records for themselves to sell.

Still, it bugs me, I don't understand why Chubby has been overlooked for the country's highest award. He has long passed the stage of the Meritorious Service or the Golden Drum Award. He is deserving of the Dominica Award of Honour bestowed on presidents and other dignitaries.

I am beginning to believe that it's about class; probably he is too poor, does not dress in the latest styles and fashion, or is he too humble? Or does he have to rub shoulders with politicians? When you see people who are ambassadors and recognized at the highest level one can't come to grips as to why a man who has impacted every minister of government's life, the rich, poor, barefoot man for 50 years and counting, can't be given such an award.

I have called for it in the past and this is my final plea and will not waste my time to write officially as is requested every year by the ministry who always seem to come up with people less deserving because of a host of reasons beyond the scope of my art and entertainment articles. Frankly this request for awards is just a tradition in the name of transparency to send in names to the Cabinet Secretary.

So, I already know this article will not make the news as it may be irrelevant to some though very few will agree with my sentiments. So I am asking, pleading for a guy whom the former Prime Minister Pierre Charles once managed, even now another former manager of Midnite Groovers, the present representative of Chubby's village, Grand Bay, Senator Ed Registe is now in cabinet and well placed to echo my call.

Chubby in his chosen vocation is as great as President Severin, Doctor Sorhaindo, Dr. Bully, Rosie Douglas. So don't wait to say all these nice things or have Wadix do the same as was done during independence with the late Pierre Labassiere who only produced ONE album with Sound Masters. Don't wait to shower praise as we now do with Felix Henderson. Honour Phillip Chubby Mark while he is alive at the highest level, as he more than deserves it.