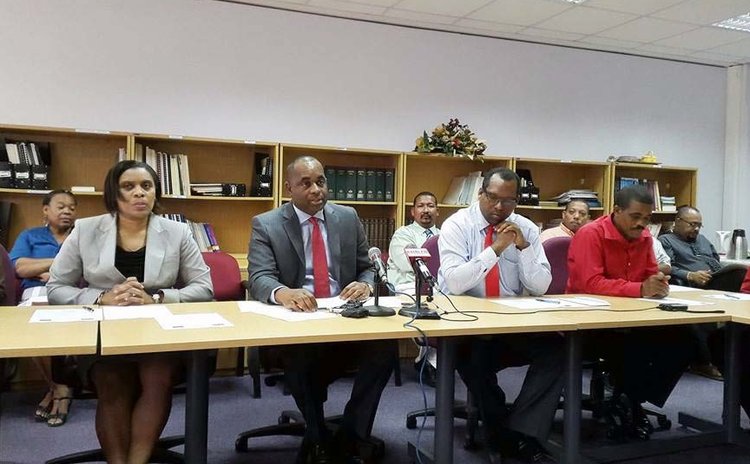 Prime Minister Skerrit and other Government officials at the signing ceremony

I do not know where rumors of my being ill came from, but they sure would not have stopped my coming to the Conference Room of the Ministry of Finance this morning to officiate and speak at this event.

Several months ago and especially during the period of the last General Elections campaign, I visited several communities and families in the east of the country and assured residents of my personal commitment to fast tracking efforts at improving living conditions; particularly as they related to infrastructure and the integrity of the physical terrain.

I salute persons, adversely impacted by severe weather conditions, for their resilience and creativity, in adapting to makeshift arrangements for commuting to and from their homes.

I acknowledge in particular, the school children who, in many instances, were forced to walk inordinately long stretches to meet the bus or take other modes of transportation to school.

Dominicans are a resilient people. Nevertheless, we determined, as a government, that the threat posed to human life and physical property, was a very serious issue, deserving of the greatest priority.

We therefore used our best efforts, as a Cabinet of Ministers, to expedite and fast track the process of securing the necessary technical and financial support, to trigger and enable meaningful relief for the anxiety and also the inconvenience of residents.

It is one thing to be physically threatened by deteriorating physical conditions, but the mental and psychological pressure is even worse, as you go to bed each night feeling somewhat vulnerable and exposed, to the reality that in the middle of the night certain natural disturbances and dislocations could occur.

I am therefore elated this morning to be able to use, as our "stepping out project for 2015″, the signing of this agreement for the rehabilitation and upgrade of physical infrastructures in certain parts of Eastern Dominica.

I said in the campaign for the December 8th general elections, that the East would get its due in this fourth term of the Dominica Labour Party administration, and I am intent on keeping that promise!

As I intimated earlier, this project dates back to 2011, when the government initiated discussions with the European Union on efforts to minimize the anxiety and the exposure of residents, in the aftermath of Tropical Storm Ophelia, in particular, but also in a period of heightened interest by developing states in complexities associated with Global Warming.

I know it is customary on occasions such as this to express thanks and appreciation to agencies like the European Union, but I wish to make clear this evening that my expression of thanks is in no way cliché.

As Prime Minister and Minister of Finance, I am truly grateful for the energizer style and duracell spirit, of the Eveready European Union, to assist, however it can, in enhancing the quality of life of the people of Dominica.

I believe Dominica was somewhat favored as a nation, to have been geographically located between the French Departments of Martinique and Guadeloupe.

This has helped to create that special affinity to Europe and perhaps explains the fantastic relationship we have cultivated with the European Union over the years.

Today, I once again express my sincere gratitude to His Excellency, all EU associates involved in the processing and bringing to fruition of this crucial project.

I have said repeatedly that the key to Dominica's robust growth and development over the past decade, has been the forging and nurturing of genuine friendships and relationships. This, I can assure you, will be intensified and enhanced in this new term of office.

At the start of this current decade, Dominica had suffered the effects of Tropical Storm Ophelia, which had produced significant rainfall and resulted in widespread flooding and landslides, particularly on the eastern coast of the island. This particular disaster resulted in significant damage to physical infrastructure and personal property, and came on the heels of two other natural occurrences.

The first being flooding of the Layou River, causing damage to the road network, public and private investments in agriculture and tourism, as well as the loss of livelihoods for persons in the communities.

The devastating consequences of these events reinforce the significant negative impact of climate change on small, vulnerable economies like ours. They also highlight the need, on our part, to put in place necessary mitigation measures, to reduce the vulnerability of the lives and livelihoods of our people in the future.

Therefore, in an effort to rehabilitate the damaged physical infrastructure, as well as improve our efforts at mitigation, the Natural Disasters Remedial and Mitigation Infrastructure Project (10th EDF B-Envelope) was formulated, with a focus on the East Coast of Dominica, where several landslides affected ten rural communities from Bois Diables to Pointe Mulatre.

After the endorsement of the EU Delegation in Barbados and the approval of the European Commission Headquarters in Brussels, the Financing Agreement for the Natural Disasters Remedial and Mitigation Infrastructure Project (10th EDF B-Envelope) was signed on 7th March 2014 between the Government of the Commonwealth of Dominica and the European Commission for 6.9 million Euros.

The expected results of the project are two-fold:

(1) Improved resilience to extreme weather events of the road between Bois-Diable and White River; to include slope stabilization; improvement of drainage; replacement of crossing structures and re-construction of the La Ronde and Boetica River box-culverts crossings, and;

(2) Improved delivery of transport between Bois Diable and White River; to include replacement of failed road structure; improvement of alignment; and rehabilitation of the White River Steel Bridge.

On 28th July 2014, the Service Contract (worth €292,352.00) was signed between the National Authorising Officer for the European Development Fund and the firm, Consulting Engineers Partnership Limited, for Construction Management and Supervision services, during the preparation, construction and post-defects liability period.

And today, 30th January 2015, marks the date that the contract for the works component of the project will be signed between the National Authorising Officer, on behalf of the Government of the Commonwealth of Dominica and the firm, Emile Gaddarkhan Et Fils Limited.

The total contract value for Lots 1 and 2 is EUR six million, one hundred and forty-one thousand, nine hundred and ninety-two, and eighty euro cents (€6,141,992.80)

The contract being signed today will not address all the areas of concern on the East Coast roads…but, it's a solid and meaningful start.

We have indicated already, that other sections of these roads will be rehabilitated with financing from the World Bank under the Disaster Vulnerability reduction Project (DVRP).

Most of the administrative arrangements for the effectiveness of this project have been done, with the establishment of the project unit, and earlier this month a technical team from the World Bank visited Dominica in order to make further progress on the technical aspects.

Beyond this, there may still be need for additional financing, as it is recognized that some of the work required is extensive. Rest assured that the government of Dominica is committed to sourcing and making available, funds necessary for the satisfactory completion of this project.

Distinguished Ladies and Gentlemen, I am grateful to the people of the Eastern Districts of Dominica for keeping the faith and for reposing their confidence in this Dominica Labour Party government.

We promised to systematically address and resolve matters of concern and discomfort, and that is precisely what we are doing with the coming on stream of this project.

Actual earth work will commence in a matter of weeks and I am confident that young men, and women, in the East will find meaningful employment in the weeks and months ahead.

Of course, as with all major construction projects, inconveniences during the excavation period are to be expected.

Essentially, as we saw with the Nicholas Liverpool Highway, inconveniences are a part of the price we pay for progress.

I am assured by all concerned that this project will be a tightly run and efficiently managed undertaking.

I have insisted that I want it completed on a timely basis, with minimal dislocation to residents. You may rest assured that I personally and definitely Minister, Hon. Ian Pinard, will monitor progress on a scheduled basis, to ensure satisfactory completion, in a timely manner.

I thank the European Union for its continued support, even at a time when it is experiencing its own challenges. Sir, we give the assurance of the commitment of the Government of Dominica to work with the EU in the interest of Dominica and the Dominican people.

It is my hope, that given our high vulnerability, in the context of climate change, this project, upon completion, will contribute to economic growth along the East Coast, as well as reduce the risk and vulnerability of the communities, as a whole, and of the livelihoods of residents.

Very soon, I hope to be in a position to officiate at another major contract signing, in which we attempt to remedy decades old problems associated with drainage and road surfaces and sidewalks in the capital city of Roseau.

This is all in an attempt to improve and modernize conditions under which our people live and conduct business.

I thank you for listening to me this morning and I take this opportunity to reiterate the commitment of this government to pursue projects that will enhance the Dominica experience…for residents and visitors alike.

Congratulations to the organizers of this event particularly Ms. Carlene Roberts, the National Authorising Officer and to all others concerned in the bringing of this project to contractual stage.