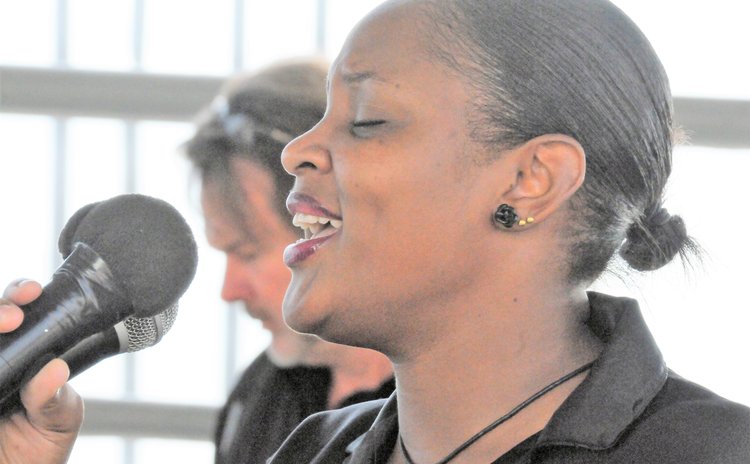 At one time singing behind a microphone was a man's thing but today in Dominica the job of the vocalist is dominated by the ladies such as Mel C, Stasha, Tasha P, Shalina Samuel, Carlene XP, Marie Pascale, Abiyah Yisreal, Ophelia and half a dozen more, I am sure.

Ophelia Marie, Dominica's Lady of Song, was among the first to do so along with Bajan Wendy Alleyne who took the lead in the Caribbean region in the early 70's, long before Kassav's Jocelyne Beroard who started in 1979.

Now we have a plethora of female lead vocalist /performers in the Soca beats in Barbados, Trinidad and also in the Reggae genre in Jamaica. These artistes have to be grateful to trail blazers such as Ophelia because at one time a female lead vocalist was never dreamt of. It would be seen as a derogatory career path and could be better utilized as back-up as in Marley's I-Threes. Three to four decades ago it must be mentioned that music was viewed not as work but something lazy, uneducated people got involved in or perhaps when better could not be done.

I guess most took their lead from calypsonians who in the day gyrated, while presenting questionable, sexually explicit lyrics aimed or merely making fun of persons and situations by way of disparaging lyrics. These individuals were labourers, daily-paid workers, fishermen and the like- considered to be uneducated and on the fringes of society. In Dominica's case the dispensers, teachers, university graduates and other professionals started coming in and even ministers of government. Music and singing professionally has now taken on new meaning and have even become careers for some while a good source of supplemented income for many.

After the COVID lockdown late in March in Dominica, the women were the first to seek out other means of reaching and entertaining fans. Apart from the Triple Kay Band, it was Charlene XP, Tasha P, Shalina and Marie Pascale who first resorted to social media- Facebook, Instagram, YouTube, to ply their trade and present live entertainment to hundreds weekly. Since we featured Carlene XP last week we will take a closer look at the latter three.

Tasha "P" Peltier is no doubt the best known being the first and only female Calypso Monarch of Dominica. She fronts for Swinging Stars and is a senior member of the Sisserou Singers. For Tasha it all started with her junior Calypso involvement when she played second fiddle to her more enterprising sister "Young Rising Star" some two decades ago. Initial disappointments and discouragements did not deter her and the rest became history when she was and immediate success at the Calypso Finals placing third and the following cupping the prestigious Monarch title in 2011.

Today Tasha has graced local and regional stages and has even won a Calypso title at UWI apart from her other Calypso exploits, latest of which being a second place, (edged by eventual winner king JD who eventually won) a step away from 2020 Calypso Monarch title. Today this UWI graduate can be found at Fort Young with Peter Letang doing her weekly Karaoke events at the Rendezvous night club. In fact, a couple weeks ago she had a special event for children and even while you are reading this article she would have topped over 100 such events at the Rendezvous. Tasha is a versatile and brilliant singer who can vocalize a Sade ballads and transform with great ease to a Destra-like performance. She is rated as one of Dominica's best vocalist in show business.

Meanwhile Shalina Samuel really started doing her thing as soon as she graduated from high school. It was quite by chance she found out she could sing and it was no turning back as she got involved with several groups in her community at Fond Cole. However, things really took a serious direction when she joined up to front with Mel C and others, with the T- Orchest Band.

Shalina has a bubbly and engaging personality on stage and she is probably the best entertainer with the hype up tempo music allows, aka Destra and Patrice Roberts of Trinidad. Shalina has also done work/ recordings with the renowned Burning Flames as well as a few collaborations.

One can get the true Shalina experience at the Ocean's Edge every Thursday night from about 7pm. She is backed up by the potent musical trio of Brent Samuel, Jerry Moulon and Gomez Drigo on keys, guitar and bass respectively. If you miss her there, then Rendezvous on Friday may provide another such opportunity.

Her repertoire starts off mellow with standards such as Commodores' "Easy like Sunday morning"; Marley's "Wait in Vain"; Maxi Priest's "Just a little bit longer"; then comes the more current ones- Queen Ifrika's "Are You ready"; Cronixx's "Smile for Me"; Jermaine Virgo's "Soul Survivor" or Third World's "Now that we found love". Gradually she signals her intent to speed up things with Exile's "Traville pou a yen-medley"; "Burning Flames' "Chook and Dig" and a couple Afro beats from Davido before springing into her comfort zone to aid the digestion of the patrons with a string of up tempo renditions: "Hello" by Kes or perhaps Patrice's "Carry on Baby."

Meanwhile, the third esteemed lady in this post COVID entertainment environment is the fast rising Marie Affana Pascale. Marie is a medical doctor and lecturer by profession and was born in the Cameroons, but she has made Dominica her home for the past 11 years. Now that Aunt Pearle Christian, founder of the Sisserou Singers, has resigned from the day-to-day running's of the group, Marie has assumed that position. She told me that not much was done by way of singing in the Mother-land but she did learn to be competent on the piano and learnt music theory and continued with the flute later on. While she can only fleetingly recall an uncle as the only person with musical talent of any note in her family, she speaks highly of Pearl Christian for her musical development thus far.

Serving as a backup for Calypsonian, Webb brought her further recognition and slowly but surely the gigs began coming in the studio or stage support for major acts. "Bucket list" and "Baby yo", her own compositions, are now riding high and is part of the bucket list for many engagements on island. Being African, Marie obviously has an affinity for this type of Afro beat riddim. But make no mistake, she can sooth you to goose pimples with a ballad. She first caught my attention with "Many rains ago" when entrusted with a solo in a Sisserou Singers concert, some five years now. Check her out at Rendezvous on Thursdays and be part of the "MP and Chill" experience with her 'cousins' and live band.