A review of "For You My Fans (FYMF) 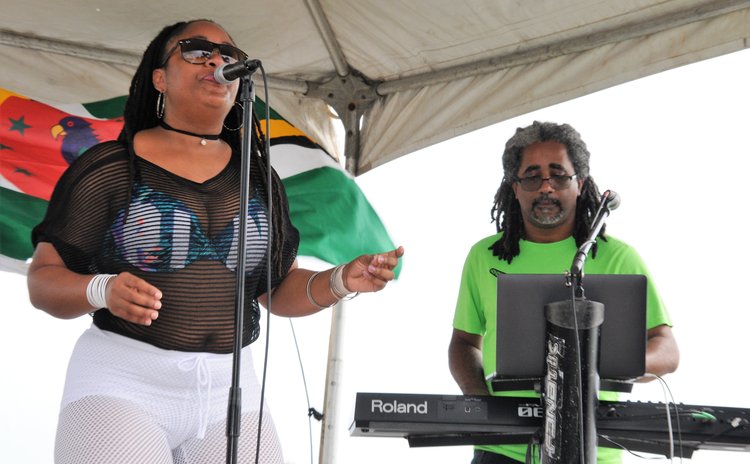 Left to right: Carlyn and Cornell Phillip in concert
By Ian Jackson

Carlene XP, one of Dominica's premier solo acts, presented one of the best ' Xpilicious' concerts, post the COVID-19 virus outbreak at the Classified Night Club last month. Carlene and her husband, Cornel Phillip, moved away from their comfort zone at the Fort Young Hotel and other established engagements throughout the island and were among the first, together with the Triple Kay, to venture to provide online entertainment for her fans as the answer to the quarantine lockdown on island a couple months ago.

Apart from Fayan Lyons and Bunji Garlin of Trinidad, they have the unique compatibility and are possibly the only other musical couple of note in the region.

The FYMF concert was among over 20 performances to date aired on Sundays to the satisfaction of a few hundred fans locally and internationally as there are really no boundaries to Facebook, Instagram or YouTube. Additionally Come-see-TV and Choice TV have also partnered with the event together with over 10 sponsors prominently displayed on the screens.

Even during performances the artiste interacted with her online social media followers from St. Lucia, Anguilla, Barbados, Trinidad, England, Anguilla, Grenada, and USA; anywhere Dominican and Soca fans are in the diaspora, entertainment was brought to them in the comfort of their homes free of charge.

Not only that; they participated waving flags and obeying the commands of the singer as some were projected and inserted as part of the live performances. Some were prepared with their flags and powder, eager to respond and participate.

DJ Snow announced the two-hour-35 minutes concert and the four-piece band of Cornel Philip himself, flanked by fast rising guitarist Mekkel Lee, ' Froggy' Joseph of Tripple Kay fame on drums and guess what, Keith Goddard, the original K in the formative years of WCK, held the bass- a formidable line up indeed!

Quite appropriately songs of praise such as "Hallelujah" and "Joy to the World" were performed utilizing the Cadence genre and choreographers to enhance the activity. The final Cadence number, a personification of the music genre, set the tone for a Reggae session.

My all-time Carlene XP favorite, "No place Like Home" was followed by another popular rendition "Drunk in Love" and Dominica's Reggae Queen, the late Nelly Stharre, was given due recognition with "Peace and Love". Colton T's "Ice Cream Man" and Devine's "Many Waters" were also featured as part of the Reggae repertoire. It would be instructive to note the a number of these compositions were produced by Cornel himself hence the musical stems availed themselves to the added back up and musical riffs which the live musician s accompanied.

Then the spicy "Soca session" began and the live audience at the Classified Club went into frenzy as Carlene took time off to interact with her Facebook and Instagram fans while engaging those in the club with "Taking a Whine on a Stranger". She interactively and jokingly labelled the live crew as 'Malcassay' , "Like-a-fete", "Kawat" and even the "Grown and Sexy," all present and 'breaking every rule' as they partied as a "Soca Criminal" or challenged to " Don't let the bumper scare you".

Then guest act, Marie Affana Pascale, a Cameroon citizen who has made Dominica her home, stepped on stage to do her thing. Marie is fast becoming a household name being a lead member of Sisserou Singers, having done collaborations with 1st Serenade and other events on island. Her "Bucket list" and "Baby yo" Afro compositions are making waves in Dominica. She was a notch below the high expectations; a bit flat and breathless at times in her execution, as she tried to live up to the hype already set by Carlene. However, this was not the case at her weekly "MP and Chill" event at the Rendezvous Night Club, where she is very interactive, and in control while thrilling her fans with her dominant Afro rhythms.

The Bouyon session took over with reigning Bouyon Monarch Carlene XP as she again took command with "We on de road", and "Bouyon Army", her winning 2018 song and "Bouyon Calling". Well, the party frenzy began again at the club and at the homes of Facebook fans who participated and streamed from their social media devises in their bedrooms, living rooms; solo, in groups or whining down on a partner.

"Powder", the creole Bouyon collaboration "Foreigner" heated up the arena as Carlene signaled for "Bouyon water" to quench the heat which ironically fueled the musical flames. A tribute to the region by way of a representation of flags signal that things were coming to an end with the concert dubbed "For You My Fans (FYMF)".

Yes the musicians were solid and well-rehearsed and all decked with their black T-shirts and the hashtag slogan embossed on their chest. The intermittent dancers with their red, sexy sweat- suits, who choreographed with Carlene, all added to the stage dynamics. As is promoted by experts, after every exercise, a warm down session is recommended and so the song "Hatch tag FYMF" was composed and executed for that purpose, as Carlene took time to come down from the stage to meet, greet and thank her fans. FANTASTIC!