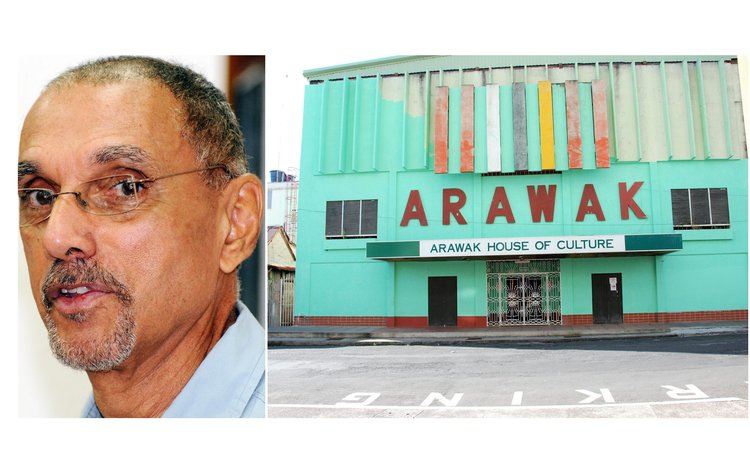 Bully, left, and the Arawak House of Culture in 2017
By Ian Jackson

It happens everywhere, except in Dominica where we don't seem to honour artistes or sports personalities by immortalizing their names through the renaming streets, edifices, parks etc. In fact, the last such act was the naming of stands in the Windsor Park Sports Stadium.

Not even the much-touted Jeff Joseph, an outstanding artiste and a staunch supporter, for all his life, of the Dominica Labour Party, did enough to receive such immortality. Therefore, it would be almost a call in vain to ask for such accolades to be given to Lady of Song Ophelia, Gordon Henderson or Chubby.

In my three decades of writing I have dealt with this subject and made calls most recently for Phillip "Chubby" Mark, to no avail. So I must be foolish or mad to use this space to do this again: given the description of madness is doing the same thing over and over again and expecting a different result.

I was moved again when a friend alerted me that 79-year-old Leroy 'Black Starlin' Calliste famed for his song "De black man come out to party" and his five Calypso crowns, not nine, in Trinidad and Tobago, that a ceremony including government officials, named a street in San Fernando after him for his contribution to the art form.

Sadly, Black Starlin could not attend because of health reasons but the great thing was that as with many other Caribbean countries, in particular Barbados, they recognized their own before eyes were closed. This country has 10 national heroes and have constituted a Heroes Day as part of annual observances. Yes, their first Prime Minister is one of those heroes, Hon. Errol Barrow, so we can draw no parallel in terms of the national respect meted out to Hon. Patrick John notwithstanding the perceptions or shortcomings. So we have Douglas- Charles Airport instead and that's commendable. We always find room for the politicians Edward Oliver LeBlanc, Mike Douglas, Rosie Douglas, Pierre Charles, and so we can almost conclude in Dominica you need to be a politician to have something named after you.

Well, I beg to differ. I am petitioning for Alwin Bully to be immortalized in this country as he has done just as much and more than many of the others after whom streets and buildings have been named. Suffice to say Bully is in similar health and age of the Black Starlin, but means more to Dominica as the greatest contributor to our cultural landscape as artist, a designer, costume builder, designer of our National Flag, chief cultural advisor to UNESCO, playwright/actor, songwriter, educator, 1st chief cultural officer, film maker, director, creative writer. Starlin looks like a joke when put side by side with Alwin but no, not for TNT. In Dominica you only do enough when you die. It would seem that no one wants you to be living to bask in any glory of sorts.

Awards like the Golden Drum, Meritorious Services, Sisserou are all good albeit these come without any financial reward. The Golden Drum is really a token of appreciation for decades of toil in the arts; the wooden drum is just painted in a golden colour. We are so averse to recognizing our own as a people that the statue by the cenotaph is left without a name even when we know the country's greatest maroon was Jacko.

This lack of respect or honour is tantamount to not adhering to the only Biblical commandment with a promise "honour thy mother and father…that your days may be long." Indeed, our days are short; our decades of dominance in sports is no more. We are now the only cricket playing country in the CPL who do not have one player represented after being dominant with 6, 7, 8, players on the Combined Islands cricket team. No minister or board to speak up for Athanaze. Aren't we ashamed? Or we are so accustomed by now that we don't know how to feel?

After being dominant in music in the region through the works of Exile One and Grammax during the decades of the Cadence boom from the 70s to 80s, we only recently got some regional recognition after 30 long years, through the work of Dada Lawrence and Machel Montano that indeed Bouyon is a beat, a genre invented by Dominicans.

We have a statue for the Venezuelan liberator along Charles Avenue; we have an entire housing scheme named after Simon Bolivar, the Liberator, but yet we are not liberated enough to get rid of oppressive names like Queen Victoria Street. No one knows who this Windsor guy is, even after constructing a stadium we still cannot get rid of his name. In St Lucia, for heaven's sake, they have Darren Sammy Stadium, in Trinidad, Brian Lara Stadium. All around the world people are awakening and elevating their own; getting rid of confederate flag in the USA because they connote slavery.

The Barracoon building is still not upgraded or names attached to immortalize the struggle of our ancestors; they posted us there and so we used it to post letters back over there- the homes of the children of our enslavers in Europe.

AMP is crying foul because there was no stimulus package that can really be accessed by musicians; so no praise is too much for the virtual efforts led by Carlyn XP, the DCA, Signal, Triple Kay, Dr. Migs and a few DJs who realize that entertainment is the fourth "need" after food, clothing and shelter. Meanwhile, our ministries of sport and culture are basically null and void.

Nothing elevates a country and its people more than its sports and culture and the recognition that follows. There is an extra swagger, a sense of hope, belief, belonging when we are behind our heroes which can be made most visible through our expression in art and entertainment of which sports is a vital sub-sector. No matter how many speeches politicians and pastors deliver if the calypsonian does not say it, no one hears it after the radio is turned off. Dice, Sour-Sour have as much appeal than the best of politicians. And so arts cannot be taken lightly. Indeed, more than half of the crowds at rallies come because of the sewo… sad but true.

So let's start with arguably Dominica's greatest cultural elder ever, Alwin Bully. Name a street in Goodwill, or better still the newly refurbished Arawak House of Culture located next to Government Headquarters. By the way, we know nothing about any specific Arawak nor can we identify any descendant in comparison to the Kalinago who are still here with us. If we refuse to acknowledge the contribution of Alwin Bully, lets hold back the tears of hypocrisy and speeches whenever he takes his final bow and his curtains are drawn.