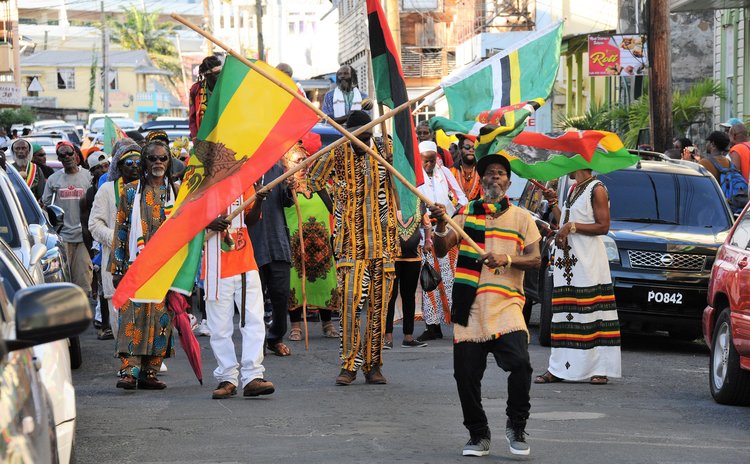 "Back to Africa" used to be the cry of Rasta's of the late 60s and 70s, which filtered down to a back to your roots reality which translated in time to growing, buying and eating local as the physical repatriation seemed farfetched. The consciousness was then back to the soil, stay off white sugar, white flour, swine, "deaders'' and salt. This was mainly articulated by the youths, some who were fresh from universities and became an extension of the Black Power movement which preached liberation, independence, self- determination. The grown up folks of that era, our parents, saw these ganja-smoking, Reggae skanking youths as mere radicals, misinformed, lazy undesirable dreadlocks; but were these youths right?

History has borne witness that in a large part they were correct with respect to the economies of these former colonies. The 'grow what we eat' maxim has finally caught on and was recently echoed in an address by our Prime Minister and by every leader who preceded him, at some time or another over the last 30 years. But even more pronounced is the health attributes derived from eliminating salt and sugar from our diet and the need for man to live closer to the soil by staying away from meats and processed foods. Maybe these youths were a bit radical in their approach, but like calypsonian Gypsy acknowledges, we do owe the children of the 70's (particularly those purporting to be Rasta), credit, and an apology for the way they were dismissed by the system. It was they who created awareness in the region and the world by way of their 'livity', via their music, utterances, the promotion of a nature driven reality with our foods, herbs, spices and now ganja.

Though many can identify with the above the physical repatriation to Africa still seems to be a fleeting possibility. The brutality and deprivation endured through the Trans-Atlantic trade and the evils associated with the same (supported in that era even by churches who blessed slave ships with safe voyages) is now centre stage as reparation committees and organizations all over the globe seek compensation for the misdeeds done and still being meted out to black people all over the globe. It has now gained renewed impetus, fueled with the George Floyd/ Black Lives Matter global movement.

For instance, there have been well over a thousand Jamaican Rastafarians who have physically repatriated to the Mother land Addis Ababa and Shashamane in Ethiopia where Haile Selassie set aside land for those in the Caribbean region and elsewhere who want to repatriate. Hundreds of Trinidadians have also made Africa their home. The only Dominican on record that has really repatriated as a response to be closer to the Rastafari Zion, the Holy land, is Desmond 'Destrot' Trotter.

Hence we can obviously conclude that Dominicans as most other Caribbean countries, are not too keen on repatriating. With all the reported strife and poverty associated with the mother land, many feel safer to identify with her from a distance via their afro-dress and other versions of African wear or engaging in cultural expressions during annual marches on Africa Day.

There are riffs among tribes, kingships and exploitative leadership that once facilitated enslavement still exist; blacks against blacks-spoils of war or downright servitude. At our doorsteps there is just token representation by our African brothers and sisters, (students of All Saints University who are from the mainland), with respect to reparations or any activity which may be associated with celebrating anything African. How ironical.

Nonetheless for those who think reparations for blacks is a myth the following may shed new light: An agreement was signed in September 1952, and West Germany paid Israel a sum of 3 billion marks over the next fourteen years; 450 million marks were paid to the World Jewish Congress. The payments were made to the State of Israel as the heir to those victims who had no surviving family.

According to Article 14 of the Treaty of Peace with Japan (1951): "Japan should pay reparations to the Allied Powers for the damage and suffering caused by it during the war. ... Payments of reparations started in 1955, lasted for 23 years and ended in 1977.

Yes, and they were quantified; Cheques for $20,000, accompanied by a letter of apology for the internment of over 120,000 Japanese Americans during World War II. They were the first issued under the Civil Liberties Act of 1988, a historic law that offered monetary redress to over 80,000 people.

Obviously there are records held by Dr. Hillary Beckles Vice Chancellor of UWI and even of our own Dr. Lennox Honychurch can reproduce information on the productivity of various plantations in Dominica and the region with the names of families who were enslaved and exploited there and a determination tabulated.

In Dominica, Dr. Damian Dublin heads a committee who is at the forefront of the reparations struggle. At a recent meeting which I attended they noted that sensitization as to what is reparation and why it is necessary was brought to the fore. During the brain-storming session linkages with such regional organizations, All Saints University, The Ministry of Education, history teachers, bands, artistes entertainers, media and yes the church at a time when the Church has finally acknowledged their involvement and have apologized. All this is in-keeping with a ten-point action plan at the CARICOM level. It also embraces the indigenous people (e.g.: The Kalinagos) who stood side by side with Blacks in the struggle against colonial exploitation.

The region sees the need to establish cultural institutions and return of Cultural Heritage as the old market and the Barracoon building, debt cancellation and monetary compensation, an apology for all the atrocities committed, psychological rehabilitation and even funding for repatriation to Africa; all for part of the 10-point action plan of the region.

Activities include drama, a week of film to promote reparation and themes on black history via Emerald Theatre, song and essay contests, community outreach, mobilization through popular bands and artist so as to appeal to the youth, renaming streets to represent local icons, utilizing space within the city to paint murals depicting repatriation and black history themes and finally utilizing our resource historians and lecturer to educate committee and public to speak with one voice on the reparations movement.

Obviously a budget- funding and office space- is necessary to make some of these programmes a reality, hence, governments in Dominica and the region must come on board as sons and daughters of slaves themselves.