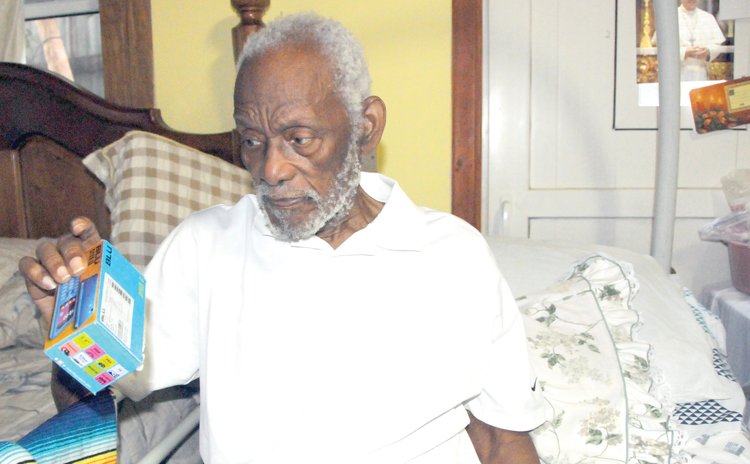 F.O Riviere in bed recovering from a stroke

Riviere said the government that he was part of has now left him to fend for himself in difficult health circumstances.

Riviere, 83, who retired from active politics in 2005 recent underwent eye surgery in Cuba and on his return home suffered two major strokes; his speech is now impaired and his left side is partly paralyzed.

"When you are sick that is when you know who your friends are," Riviere said. "A man like Ambrose George who I used to assist in the Bath Estate area is yet to come see me and doesn't know if I am alive. When you have friends like that you don't need enemies. They just forget me totally.

"I was in the hospital when I came from Cuba and a guy next to me that I don't know at all said he expected people from the Labour Party to come visit me. I responded saying you see how it is in life…the first week that I came back from Cuba I had two strokes. I am not bothered about these guys; I don't take those things to heart because if I was I would have been dead already."

Riviere said he was never part of Prime Minister Skerrit's "inner circle" and he has paid the price.

"I never knew that he was that type of person, selfish. Those two fellas (Skerrit and Vince Henderson) are nothing easy and bad for the country. They were in a hurry and I can tell you that it was a mistake to make him (Skerrit) Prime Minister of Dominica but I think we are better off with Skerrit as PM than Vince. It would have been worse for us…those two fellas were in a hurry in the political world. This country is lost," Riviere said.

A close friend of late Prime Minister Pierre Charles, Riviere said his friend "was crooked" and that he must be now moving in his grave given the allegations of corruption now being leveled at his Labour Party government.

"I was very strong on the issue of corruption and so those guys did not like me. In fact they had their little gangs in Dublanc and Bioche against me…I had it rough," he said.

Riviere added: "We broke diplomatic relations with Taiwan and went to China and up till now the people of the country do not know the reasons.

Describing himself as currently "a-political", Riviere disclosed that he is no longer a member of the DLP. Nonetheless, he asked for medical assistance from the government to return to Cuba for medical attention and he was told that he had to apply.

"I am a former government minister and that is what I was told," Riviere said.

Many calls to DLP president Petter St. Jean for a response to Riviere's charges were not answered or returned.