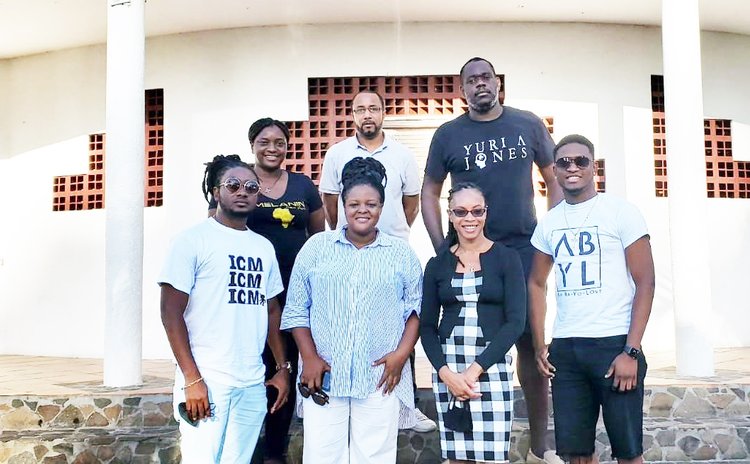 Roseau, Monday 1st February 2021: Seven members of the Dominica music industry now make up the executive of the Association of Music Professionals (AMP). The voting took place on Saturday 30th January 2021 at the Alliance Française with 25 members in attendance and 22 participating via Zoom. Singer/songwriter and member of Signal Band, Sheldon "Shelly" Alfred topped the nominees with thirty-three (33) votes and was selected as the Executive's President.

Joining him on the Executive are singer/songwriter Michele Henderson (32 votes) who will serve as Vice President. Singer/songwriter Colton "Colton T" Thomas who garnered 28 votes is the new Secretary while Music producer Yuri Jones and music publicist Ayeola George who both scored 23 votes each are the Association's new Treasurer and Public Relations Officer respectively. Music executive Dion Henderson (25 votes) and singer/songwriter Marie Pascale "MP" Affana (21 votes) round out the top seven voted to the Executive. Henderson will serve as a Board member, while Affana will serve as Assistant Secretary. The Board will also comprise production manager Arden Forde and producer Arade "Maskman" Moses.

Alfred says he is honored for the opportunity to serve as President and sees this as "the opportune moment to transform talk into action."

He sees AMP as a uniting force. "My vision is for AMP to be the sounding board and representative body for all practitioners in the music industry despite all the factors we think divide us, such as our roles, experience, gender and access to resources.

"We should use AMP as a safe space to accept the multi-faceted nature of the industry, discuss its challenges, gather our resources and be represented with one voice," he adds.

Michele Henderson shares this sentiment. "A new day has dawned for Music in Dominica. As the new executive for AMP we will attempt to address the real issues affecting the sector, engaging the necessary stakeholders with a view to act on rather than just discuss a way forward."

The new executive will next meet to determine the by-laws and rules that they will be governed by moving forward.

AMP was registered in Dominica in 2007 with the aim of providing practitioners in the music industry with adequate representation and training in various aspects of the industry in order to bring about a more efficient and less contentious operation of the industry. From its inception, AMP has focused on training, having successfully presented workshops in songwriting, live sound engineering, studio engineering and music business.

After being dormant for some years, a meeting was held on Tuesday 24th November, 2020 at to discuss the revamping of the Association. A steering committee was formed to undertake some restructuring activities since the mandate of the current executive, elected back in 2015, has expired. This committee has since been dissolved and replaced by the recently voted Executive.