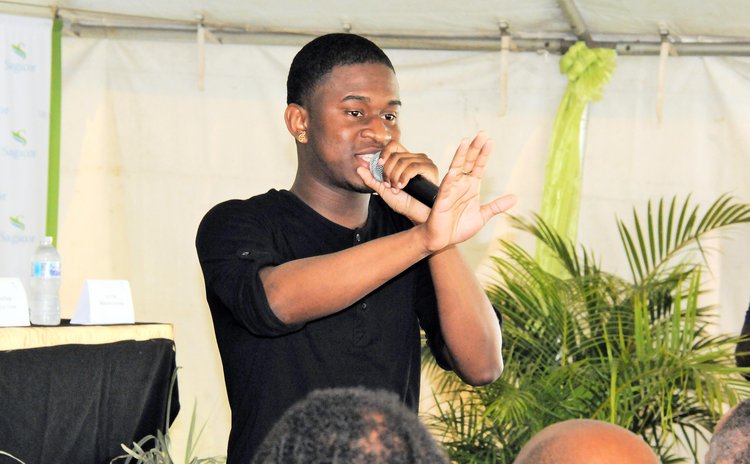 Lead Singer of the Signal Band
By Ian Jackson

Silently, I observing the development of Dominica's youngest band, Signal, who in spite of their youth have been able to put together some formidable, thought-provoking lyrics more frequently than their counterparts in the Bouyon world have been able to do.

There is no doubt when it comes to popularity, experience and stage performances, the Tripple Kay will out-perform most bands on island but in the lyrics and composition departments, I tip my hat to the Signal Band.

In my MBA dissertation, long before the group was formed, and I served as teacher to Sheldon Shelly Alfred and manager Jerlani Robinson at the Saint Mary's Academy, I knew the former had potential as a performer. I was his composer when he won the Junior Monarch on three successive occasions and I would like to think that in addition being his English teacher I must have impacted as would his other teachers. You can observe that in the lyrical content as a major writer and front man for Signal Band.

Most fans, who have a good appreciation of music will tell you that since after WCKs "Balance Batty", "Conch Shell", "Champion Girl", "Culture Shock" or the Ashton Lugay's "Ciello" composition days, our bands have struggled to present well written, harmonized and orchestrated compositions. A direction was also being charted when the Klockers Crew duo of Skinny Bantan (now Shadow Flow) and Dennison 'Dice' Joseph (now nine-time monarch) complimented with the rap and vocal combination which worked well with the WCK.

It was sad when things fell apart for the second time in this music history as Skinny and Dice, up to today, are two of the most talented regional performers over the last two decades. Nayee Jno-Baptiste exhibited some talent as a budding songwriter and vocalist, albeit too brief. The mantle was passed it would seem to Tripple Kay who once played a mean Compa. However, it was the introduction of the flamboyant Benji who catapulted the group to ascendancy with his 'rude boy 'styled lyrical chants driven by the drum machine, which really caught on. The era of good vocal was over, and even' Tarzie' , the better singer, played second fiddle to his more illustrious counterpart.

Canefield's RSB band was no more having disintegrated while on their USA tour and the rift with the two WCKs and two Serenades did not help Dominica's music, and so the youths had no choice but to gravitate to a new brand of Bouyon which lent itself to more chanting and less vocal harmonization or constructive compositions. Singing, or good vocals, was secondary to being a good, energetic hype man who could get the crowd in frenzy. So, quality instrumentation was compromised for more sequencing and repetitive riffs , with vocal enhancers to provide a semblance of singing which could not be replicated in live performances.

Songs became limited to women's posterior rolling back or bending down under the mango tree or even ending up in the 'soucie' a metaphor for derogatory lyrics. There was the 'big-ing up' of gangs when lyrics ran short or spontaneous refrains which was unfortunately played at 'Block-O-Rama's and live jams, giving the impression that this was the standard Dominica had to offer.

Then lo and behold, 9.5 percent of every 10 songs represented carnival-type music; the music was basically upbeat and no one could really dance to it, only prance. The buttocks seem to be the only way to go as couples did not see the need for dancing face-to-face anymore. A WCK music born two decades ago, which both old and young could groove too, now became food for children and block-o styled carnival festivity, too often associated with rowdiness or violence, not just during local carnival festivities, but in 'Gwada' where the music has been banned in certain quarters.

It was soon discovered by a new generation that you did not necessarily have to be a musician with any level of competence to be a producer of music. So recording studios sprang up in every room: if you have a computer, a miniature keyboard and two speakers, you're in business. If something does not sound right, by the press of a couple buttons, like spell check on Microsoft Word on the computer, you can do the adjustment. No need to play within the scale or depart from a couple major chords when the vocalist himself is flat and does not even realize it, far less the excited fan base.

I dare say after 30 years, a third chance is now signaled, by the SIGNAL BAND, to get the music back where it can relate to hearts, minds and not just to feet. It can be done as leading "Bouyon band Tripple Kay has shown with "Still Standing" and a couple other good compositions. We certainly need more "Ani bi yo love" and the equally powerful "I need a blessing" which like its predecessor is the best Bouyon composition thus far for 2020. It can even be sung at church or any event to lift the spirits of every generation, not just teenagers.

There comes a time when an artiste does not have to play up to his fan-base particularly when that base does not have the spending power or the ability to land the band a substantive record deal. If it's just about party, you will be just a short-lived entertainer who stood for nothing and did anything to make people party.

What about when the party is over….what is the legacy?