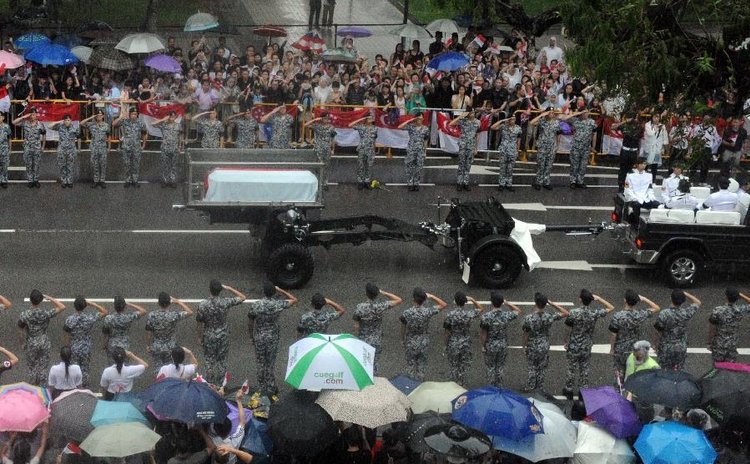 SINGAPORE, March 29 (Xinhua) -- After a week-long national mourning of the late former Prime Minister Lee Kuan Yew, it's finally the time for Singaporeans to say farewell.

Tens of thousands of people have been queuing up on the street just after dawn in front of City Hall, where a 21-gun salute with four ceremonial 25-pounder howitzers was given to Lee in recognition of his contributions to Singapore's nation-building.

Shirley Lee, with her husband and three children, arrived at 8: 15 am. "I have a lot of respect for this man. Without him, we would not be what we have been today. And it's important that they (my children) are here to pay their last respect, again."

Just like many others, Shirley and her children are among the over 450,000 people who have paid their tribute to Lee at the Parliament House over the past four days. Many have been lining up for up to eight hours, just for an opportunity to bow to the former prime minister in less than two seconds.

At this last chance, they came again.

Heavy downpour started to fall across the whole island at about 10:30 local time in the morning, with Singapore's signature high- rise buildings such as Marina Bay Sands barely seen just kilometers away.

However, no one dropped out of the line. The just stick to their post, holding umbrellas and flags and waited patiently for the man to come.

When Lee's Gun Carriage came closer, the crowds cried out "Lee Kuan Yew" and swayed the national flag when the funeral cortege passed by.

Lee's Gun Carriage was carried by the Coffin Bearer Party at 12: 30 p.m. from the Parliament House to a journey of 15.4 km before it ended at the University Cultural Centre at the National University of Singapore, where his state funeral commenced at around 2 p.m.

The journey passed through important landmarks such as Old Parliament House, City Hall, Gardens by the Bay, Singapore's Corruption Practices Investigation Bureau as well as Tanjong Pagar, where Lee has been serving as parliament member for almost 60 years.

The state funeral of Lee has seen over 2,200 guests from all walks of life and from around the world. Lee Hsien Loong, Singapore's Prime Minister and the eldest child of Lee, said in his eulogy that it has been "a dark week for Singapore".

"The light that has guided us all these years has been extinguished," he almost cried out for several times.

At 4:35 p.m., the Singapore Civil Defence Force sounded the " All-Clear" signal through its public warning system to mark a minute of silence in honor of Lee.

During the 60 seconds, all public transportation were suspended, with all MRT trains pulled to a stop at stations and opened their doors, and buses scheduled to depart from terminals be held back during the one minute of silence.

Across the nation, Singaporeans have also jointly observed the minute of silence at 18 community sites and 105 community centers.

For them, it is the moment they must experience.

"It's an important moment that all of the family should be here to see him off," Shirley said, "I would definitely regret if I'm not here today."