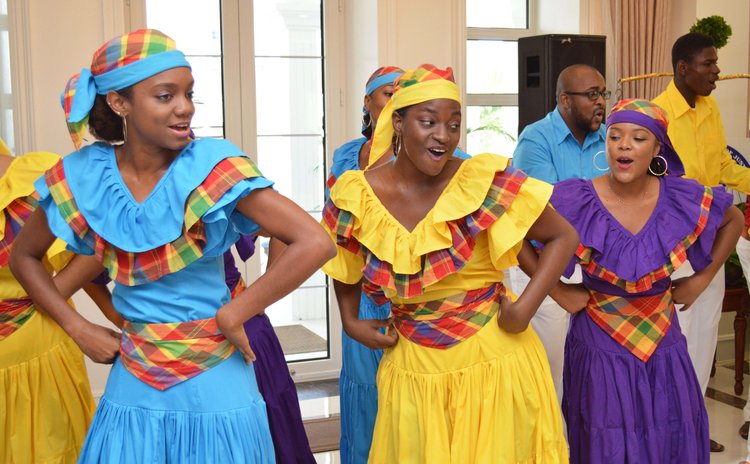 Twenty productions in 21 years, 22 choir members and 11 instrumentalists; this is the Sixth Form Sisserou Singers today, as they presented 'Harmony' their latest production earlier this month. There were changes-not only a new venue, the Goodwill Parish Hall was the venue because the Arawak House of Culture was damaged by the hurricane; also, the president and vice president, Marie- Pascale Affana and Amanda Lawrence, were entrusted with the director's chair allowing Pearl "Aunty Pearle" Christian the opportunity to watch the concert unfold and make only the necessary consultative interventions, while she basking in the fact that the group will be left in solid hands when the umbilical cord is finally severed.

To give a ball-by-ball commentary on the group's latest production would probably be repetitive as the Sisserou Singers are consistent high performers when it comes to show business in Dominica. It is even becoming really difficult having reviewed most, if not all of their 20 productions, to decide which was my best, as the bar is always set high in keeping with their motto: " Anything worth doing , is worth doing well".

What I will say is that since one can be considered qualified for a Golden Drum Award after 20 years, then Sisserou Singers in fact deserve one and I am putting up their name up for consideration in their 21st year of actively gracing patrons to an annual production that is second to none in the Nature Isle.

I still wonder why their latest production was titled " Harmony" since the group is really always in harmony with their blend of top sopranos, second sopranos, altos, tenors and basses accompanied by some exceptional instrumentalist such as Michele Henderson, Fred Nicholas, Jodie Johnson and Leanne Christian, just to name a few of the leading musical acts Dominica can showcase.

The two-hour-30- minute show delighted audiences with 24 songs from a wide range of genres including Classics, Calypso and traditionally the most popular, folk.

I must mention the new member of the Sisserou Singers, Casim Birmingham, a former Q95 Talent Search winner and the reigning back-to-back DBS Christmas Song Contest champion. His expressiveness, his body language, the spoken word and when he was entrusted to the solo on "Lift Every Voice and Sing" really brought a new energy and 'gam' to the compliment of eight male tenors and basses as he gyrated his way into our hearts.

Danielle Wilson was also brilliant in her execution on solo of "We've Come This Far by Faith" and got a rousing response from patrons. In section 1B, I particularly loved the arrangements and choreography in "Stand by me" and the final piece of this segment 'Bailando' for the call and response nature between the males and females on stage.

Shanice Langford stood out in the local Calypso composition of Stephan Subero "Dominica Strong" while the best Bouyon song for decades, the popular " Ani Ba yo Love" composed by Sheldon Alfred of the Signal Band, could have been pitched one tone lower, in my opinion, and could have been a bit slower due to the wordy nature of the composition. Nonetheless, the choreography, precision and the song's own appeal did enough to make it a crowd pleaser.

Then there was everyone's favorite, the folk section, with compositions by Pearle Christian, Jean Lawrence Maturine as well as composers from Trinidad and Jamaica. The songs were woven around a tale of the fictional cultural-character Copen Lapen, Hurricane Maria and Tar Baby. This section was dedicated to Dominica's King of Conte, the late Lawrence Brumant and was relayed through the fictional protagonist Clemencia, a vendor at the Roseau Market who injected story telling as part of her marketing strategy to sell her products: For example- for the sale of green banana "Five for Five."

The elaborate costuming, fabric and color is always a major feature of Sisserou's productions and this is even more evident in the Folk sections. The stories were relayed by several members in poetic prose, song and dance. "De Blinking bus" and "Mama look a boo boo dey" were pretty comical. The latter, was a one-time popular Calypso of the late 50's and early 60's by Lord Melody from Trinidad who commented on the ugly looks of one character. It was immediately followed by the satirical response "Sweet and Handsome."

"Every Time I Pass" and "Dis Long Time Gyal" were all flirtations in song that thrilled the audience and then the call to "Change Your Ways" ably delivered by soloist, three-peat female Calypso monarch, Janae Jackson. Then the end came with "Mesi Bon Dieu," and before you knew it, Clemencia and her children at the market had sold all their supplies.

In keeping with Sisserou's tradition of honoring people who have preserved choral music, Esther Robinson was so honored this year.