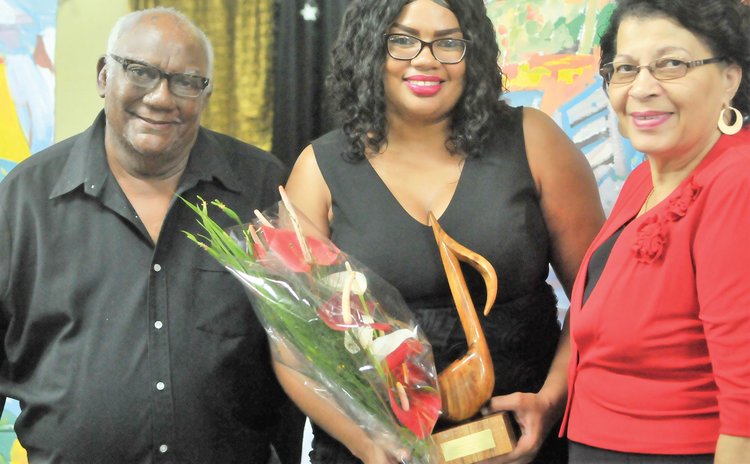 Have you heard the Sounds of Silver?

It sounds like songs like: "Lift up your Voice"; it's hymns like "Hallelujah"; it's "Africa" by Toto; it's "Marche con Antillaise"; it's "Phillip Moso Zowey"; it is many more songs and voices and colourful outfits and dances and boundless energy.

Sounds of Silver is the culmination of 25 years of fun and beautiful human voices singing together and young people defying the stereotype.

Sounds of Silver is the Sixth Form Sisserou Singers (SFSS) 25th Anniversary performance that did not disappoint the sold-out crowd on Friday 12 July, the opening night.

But despite the air-conditioned, the ballroom at the St. Alphonsus Parish Hall was sweltering; maybe there were too many bodies to be made cool.

As usual, during the show, the SFSS honours an artiste for her/his outstanding contribution to the development of choral music in Dominica. This year Leanne Christian received that honour.

"If you are the granddaughter of L.M. Christian, composer of the Dominica National anthem, and the daughter of Purcell Christian, accomplished violinist and Director of the Christian Musical Class, you could hardly escape the lure of a career in music education and performance. Leanne Christian happens to be one such person," said the citation printed in the 28-page booklet.

It continued: "Born to parents Purcell and Mavis Christian in 1988, Leanne began her musical journey at the age of 6 when her father enrolled at the Valene Letang Music Studio. She studied the piano with Mrs. Valena who, three years later, recommended her to the brilliant Malaysia piano teacher, Leng Sorhaindo, founder of the Kairi School of Music. Under Leng's tutelage, Leanne would study the piano attaining her grade 8 level certificate with the Royal Schools of Music, and her grade 5 theory of music certificate with that board. She later studied the violin with her father and gained the grade 7 level certificate on that instrument. During those years, excellence in music was the target she aimed for. That was to manifest in the high exam results she achieved and awards she received over the years.

"All of this training and her phenomenal ability to sight- read new m music rendered her a sought after accompanist for her high school occasions - Masses, school anniversary celebrations, graduations. On graduating from the Dominica State College in 2007 with an associate degree in Business Administration, she joined her father's school of music as a partner and music teacher.

"In 2005 Leanne joined the community choir, River Song, as their main accompanist, and later in 2009 she began her involvement with the Sixth Form Sisserou Singers. From time to time, Leanne has served as organist for the Anglican Church. Currently, she is the resident organist with the Methodist Church. She willingly provides accompaniment for many school, community and church choir events including the annual St. Cecilia Festival of choirs. As the main accompanist for the Royal Schools of music Exams, Leann e is sometimes called on to play complex and demanding material. This she does with exceptional competence to the benefit of our students. Her expertise con ­ tributes to the high level of success Dominica enjoys in these exam s. She also avails herself to students requiring piano accompaniment for the CXC music exams. Lean ne is a member of the Dominica Association of Music Educators".