Spare a thought for our Emancipators 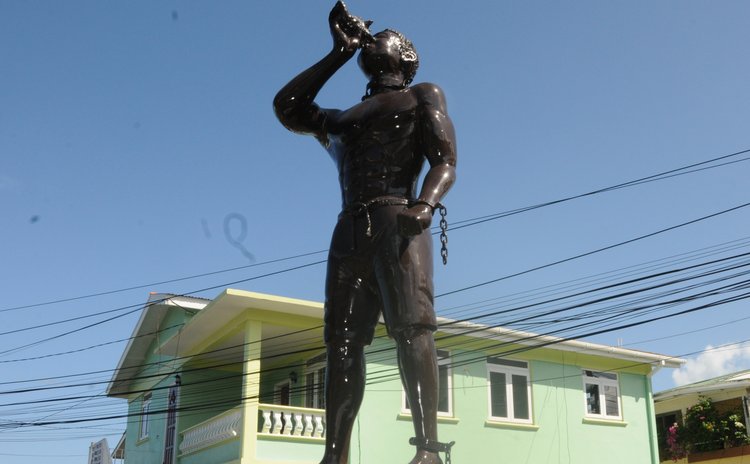 They hanged him on a clement morning, swung between the falling sunlight and the women's breathing, like a black apostrophe to pain. All morning while the children hushed their hopscotch joy and the cane kept growing At least that is how they tell it It was long ago (Extract of the poem 'Epitaph' by Dennis Scott)

Indeed it was long, long ago; many of us have forgotten how the Kalinago and our Negro ancestors preserved this land for us and fought off the slave masters. It is not too long ago that we were taught to refer to butchers like Drake and Hawkins as "sirs", knighted by their queens, not as Vivian Richards or Dame Eugenia for their fame in cricket or politics respectively, but for savagery and conquest.

So, I say, hats off to the Division of Culture for recognising the maroons by way of erecting a statue for all to see and to evoke memories. I heard discussions about whether it's the right location or about the material that it is made of, or even the quality of workmanship. But what is even more important is when our children and other generations pass in this area on that Turkey Lane intersecting with, ironically, Queen Victoria Street, they will ask questions and they will be told stories of Jacko , Balla, Carib Warner and all those who fought for Waitukubuli.

I have found that poets describe such monuments best, in a most nostalgic way. Julius Lewis aka Sprinter of Dominica, defines the "unmarked graves" in 'Not One' this way:

It is not surprising that a statue of Simon Bolivar was erected by Venezuelans in our country even before we erected anything to represent our heroes. The Kalinago are right, they still await the day to see something in their honour having been the fist inhabitants, protectors and collaborations with the African Negros in preserving this blessed land. In fact they were never enslaved but fought off the conquerors fiercely while the Europeans spread rumours of them being cannibals.

Sadly we still study them at school. Messrs. Blanc, Georges and others, such as Ralph Casimir, continue to lament that no African history is taught at schools and so our people do not know themselves. Ralph Casimir, the Garveyite, died almost two decade ago without any fanfare; our children are oblivious to the sign across the bridge and the role that EC Loblack played as an advocate for the working class.

Patrick John is vilified, and we forget that he was the one who led this country to independence before his fall from grace. We don't hear of Cissy Caudeiron, the one who defined our culture. Nonetheless, I am pleased to see that E.O. Leblanc is given some prominence, so probably there is hope beyond being politically expedient.

We need to hear and teach in Social Studies classes about Ma Tutu-our Bele queen, Alwin Bully who designed our flag, W.O.M Pond and Henkel Christian who wrote and put music to one of the best anthems in the world, Lennox Honychurch who taught us so much about our past through his exciting Dominica Story and his writings.

Russians literally worship Stalin, Americans their founding fathers - Abraham Lincoln, Thomas Jefferson; Jamaica adores Marcus Garvey, Marley and of course; our friends from Venezuela or Cuba have only good things to say about their liberators Simon Bolivar and Fidel Castro. Here, Chavez is held in higher esteem than any of our leaders!

I believe we need more of those symbols to remind us of those who left good footprints on our shores throughout life's journey.

So even as Emancipation Month has just ended, let us pause for a minute to reflect on the culture, cuisine, music, language and our freedom; let us spare a thought for our African and Kalinago heritage and define who we are as a people. Then if we do, Rastamen who espouse liberation, such as Ras Algie, a Dominican artists and drummer, who visited the Cameroon, would not have to document in poetry:

On that day When a statue Of a negre mawon Was unveiled by the president Nuff people was there But only I, Ras Algie Was the only Rastaman In Neg Mawon costume Portraying a zombie...