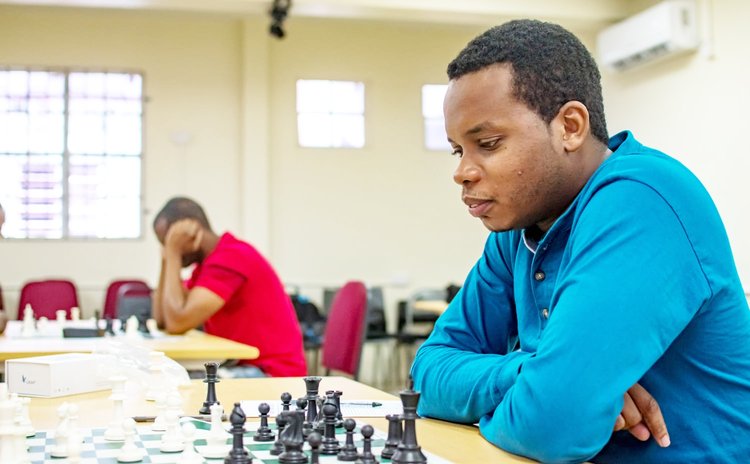 Nigel Francis at the chess board

Even when he's backed into a corner on the chessboard, Nigel Kevin Francis lives for moments when he's able to find a way out.

"Chess is interesting," said Francis who developed a love for the sport at a very early age. "What really drives my passion is the thrill of the competition, having to think ahead to what my opponent is thinking, what he's trying to do to you, how he's trying to attack you."

While many other of his peers were interested in other sports, like football, cricket, and basketball, Francis revealed to the Sun that he fell in love with the game of chess at the age of 14, after he was introduced to the sport by his friend Malcolm Ettienne, who first started the chess club at the Dominica Grammar School (DGS).

From there, Francis' love for the game grew immensely. Eventually, he found himself practising daily, often with the older gentlemen on Virgin Lane, which he says really helped to hone his skills.

Growing up in Fond Cole, the nature lover Francis who enjoys other outdoor activities such as hiking and snorkeling said that he used the game as a means of escaping whatever situation or struggle he was faced with.

The calmness and precision which he developed after years of practice, just last week, landed him victory, as he became the first-ever National Chess Champion of Dominica. "It has been a long time coming. I've been looking forward to it since I started playing chess and a lot of practising reading and overall just developing my skills has gotten me to this point," the service officer at Big Edge Financial added.

Francis, who is also the president of the Dominica Chess Federation (DCF), stands by the view that greater investment needs to be placed into the sport which can gain young players' international attention.

"Chess is a sport which requires equipment," he told The Sun. "So right now one of the things we want to do is to get equipment in schools in certain public places where people can come out to play. While it is true that you can play online it is also true that humans, being social creatures, playing face to face sometimes is always a better option, so we would really like to see some more investment into the sport."

Presently, there are just over 20 members within the organisation, however, Francis says that this number should be in the three hundred, given the number of people who play chess on island.

As such, the organisation intends on reaching out to as many people as possible across the island, to get more players, particularly the youth involved in the game of chess.

When asked whether he thinks of himself as a guiding light for young chess fans at his young age, much like his calm demeanour, Francis is suitably modest about such expectations.

"As long as I can and they would like that assistance then I certainly plan to," he said.

He added that he would love to get more scholastic kids and youth to see chess in a positive light rather than society's view that it's a game played only by older men.

As for the future, this sports rising star plans to improve his abilities to one day etch his name into the global record books and to make a name for Dominica where chess is concerned.

The organisation can be reached via their website Dominicachessfederation.org, Email: Dominica chess federation@gmail.com, and on its social media pages.