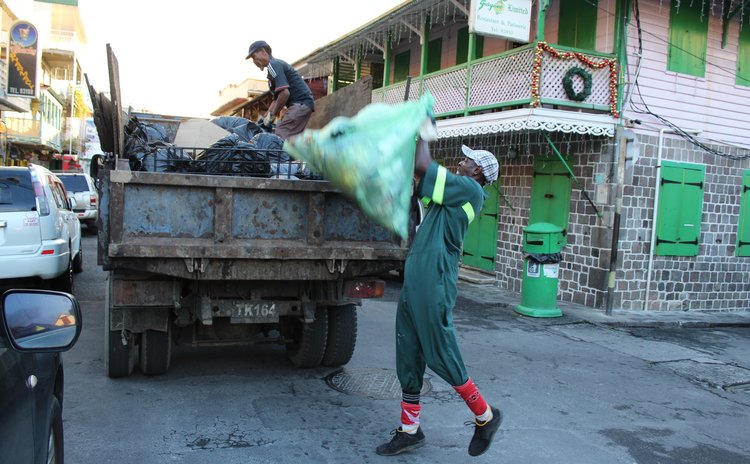 There is no doubt that the garbage situation in Roseau and environs – and apparently in the rural communities – is becoming quite an eyesore. Not only an eyesore but a serious health hazard. Interestingly, the two main parties involved blame each other. That is to say, on the one hand, the people who put out garbage consistently complain that the trucks are not there when the scheduled pick says they should be, indeed, do not show up for several days, sometimes several weeks…

The other party are those responsible for the actual pick-up, the people "managing" the Solid Waste Corporation. The collection trucks, they say, are no-shows often because they are under repair also implying that there are probably not enough trucks to start with, hence the problem. Solid Waste also complains there is too much unnecessary waste that is put out much of which can be composted or recycled. This is probably true but is a longer planning matter to be address. There is a greater problem for solving NOW – keeping our environment free of litter and garbage in a practical way TODAY.

It must be recognized that the garbage trucks involved in that sort of heavy duty activity on a daily basis WILL regularly break down. So good management requires that provision be made for this reality. It would seem nonetheless, that the crux of the problem is really that NOT ENOUGH TRUCKS are available in the existing fleet for garbage collection. It would seem logical then that the PURCHASE of more trucks is NECESSARY – and would be an excellent use of the windfall CBI funds that are being freely handed out admittedly for OTHER useful endeavors (…Dominican's villages stand to be TRANSFORMED by their current allocations… as will our road network…).

But Government's focus for these CBI funds ALSO needs to be channeled to critical areas like MORE VEHICLES for garbage collection.

In Part II next week, we will look closely at the role of the Roseau City Council, the Minister responsible for Tourism AND Urban Renewal, waste generated by the private sector etc. They must ALL be held accountable!