The Changing face of the Caribbean – part 2 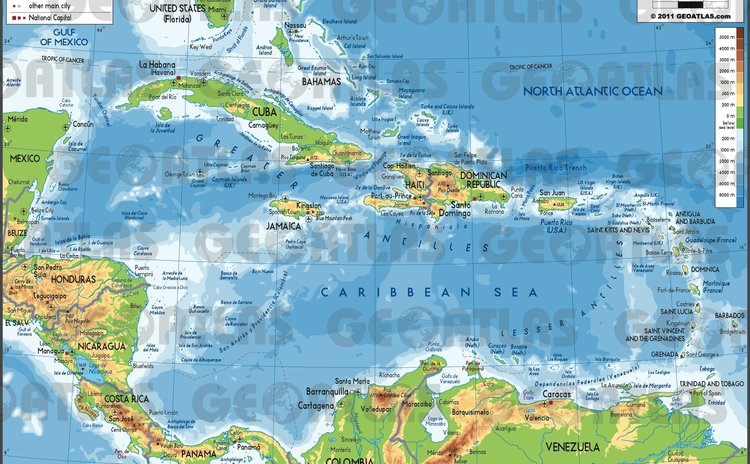 Map of the Caribbean
By David Jessop

How should we regard the Caribbean's future? Should it be with pessimism as some commentators suggest, or with optimism? The answer seems to lie in how one measures the likely effect of change.

Looked at objectively, it is probable that over the next decade the regional economy may benefit significantly from oil and gas discoveries in countries once seen as being at the margins of the region; that deep water ports and the enlarged Panama Canal will enable the development of manufacturing and assembly hubs; that tourism's rapid pace of development will continue; and that well-regulated offshore financial services centres in the region will carry on developing.

To these possibilities might be added the creation of a blue economy, taking advantage of the Caribbean's vast ocean spaces; the repositioning of agriculture to address the region's burgeoning food import bill; and the opportunity presented by the growing numbers of talented individuals across the Caribbean able to drive the growth of a high-tech and creative services economy.

What this future landscape does not yet reveal is in what way all of the people of the region might benefit in the longer term. Nor specifically does it speak to how governments, beyond rhetoric, intend to use such developments to trigger the new investments in social infrastructure that will be needed to power the region into the latter part of the twenty-first century.

Most new economic developments in the region are now led by foreign investment. While they invariably bring benefit in the form of employment, it is unclear in most cases how much new revenue they generate for governments, how this is to be spent, and whether it will be used in a manner that benefits all citizens through, for example, communal investments that ultimately increase living standards and social mobility.

Unfortunately, Caribbean reality continues to hold back such possibilities in many countries. That is to say, through the absence of leadership and vison, the weakness and moribund nature of many institutions, the bureaucracy, growing levels of corruption, the isolating of the private sector and civil society by government, and in places, an older generation that still exercises control by suppressing new ideas and fresh thinking.

For these reasons, the regional economic matrix that is now emerging argues for a new type of debate on how best to manage and draw social benefit from foreign investment.

This is not to suggest a reversion to the ideologically led approach taken by both the Caribbean left and right in the past, but for civil society in particular to consider how the revenues that might reasonably be expected to flow from new ventures, might best be used.

In recent years, the region's environmentalists have understood very well the need to ask searching questions in advance about foreign investment and the common good. It is an approach that now needs to be more widely adopted so that governments and opposition parties are pressed on the detail of how they intend translating newfound income into social programmes, and in particular into education, health care and housing.

At the end of last month ExxonMobil's Country Manager in Guyana, Jeff Simons, made clear when speaking to local media, that Exxon take the view that it will be government's responsibility to create employment by making using of the revenue it earns from the company's major offshore oil find. "The greatest benefit is the revenue stream provided to the country. If job creation is critical, then take some of that money and put it into areas where job creation could be exponential relative to what we are talking about here," Mr Simons said.

Put another way, what needs to flow from the revenues that accrue from foreign investment, if the region is to take real advantage of them, is a much clearer explanation of how they will be applied to helping develop a regional population fit for the way the world and the Caribbean will be fifty years from now.

This particularly the case when it comes to the region's education system.

For many years now, the Caribbean has been able to cultivate a generally positive image of high literacy levels and academic achievement. It has used this to promote itself as a location for foreign investment and as an indicator of its identity and culture.

However, if one looks more closely at what is happening on the ground in many states, it becomes clear that away from elite schools, the region's secondary education system is failing to turn out students with the type of qualifications or skills that will enable the Caribbean to succeed in the highly competitive services or technology-based industries that its future rests upon.

As Caribbean educators point out, education in the Caribbean may also no longer be fit for purpose as it has largely been based on adapting a colonial inheritance. What is needed, they suggest, is a new educational philosophy appropriate to the contemporary Caribbean, that involves a Caribbean-led assessment of the region's key competencies, a focus on the economic areas where the region might hope in future to see economic development and have global competitive advantage, and an approach more closely related to the digital world.

Encouraging foreign investment is a rational response to the region's high level of indebtedness, and the limitations of the Caribbean's size and ability to generate capital. It accepts that the time has passed for looking back, accepts globalisation, and acknowledges that there are practical limits to notions of sovereignty.

However, in agreeing to become a facilitator for others and economic globalisation, and as the face of the Caribbean begins to change, much more thought deserves to be given to how the revenues arising out of foreign investment are to be used in the longer term on policies that ensure that no one is left behind.